From The Diary Of Anne Frank Class 10 English NCERT

Class 10 English students should refer to the following NCERT Book chapter From The Diary Of Anne Frank in standard 10. This NCERT Book for Grade 10 English will be very useful for exams and help you to score good marks

From The Diary Of Anne Frank NCERT Class 10

Reading CompRehension
text i
The following excerpt is from the diary of Lena Mukhina, a teenage girl who had undergone the atrocities of Germans when they fortified the city of Leningrad. The siege of Leningrad is an important landmark in the history of Russia. The siege of Leningrad lasted from September 1941 to 1944. The city was cut off from the rest of Russia. The Germans continuously bombarded the city which resulted in death, destruction, and starvation of the people. However, the resolute Russians were warned in the beginning that the enemy was at the gate and it was a question of life and death. They fought bravely and failed the Germans in their evil designs.
Read the excerpt and answer the questions that follow.
Foreword from The Diary of Lena Mukhina
No one could possibly have known that the city would remain in the grip of siege for 872 days and nights. But Leningrad’s citizens had begun to feel the breath of war as early as September. Daily air raids and artillery bombardment of residential neighbourhoods drove the city’s inhabitants into bomb shelters, several times a day, and for hours at a time. People’s initial curiosity in the aftermath of the first bomb attacks soon gave way to fear and then, in conditions of appalling hunger and cold, to apathy. Leningraders welcomed inclement weather for the reduced visibility it brought. They came to dread sunny days and moonlit nights, when the Germans would be sure to bomb their city. Cloud cover, however, offered no protection from artillery fire: in just over six months from the start of the siege there were only thirty-two days when shells did not explode on the city’s streets. 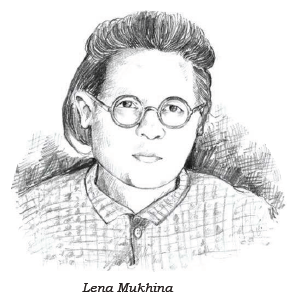 Hunger soon set in. Between September and November 1941 the bread rations that had been announced in July were reduced five times, reaching their lowest point on 20 November — 125 ‘blockade grams’ for children, dependents and white-collar workers and 250g for manual workers, technicians and engineers. Rations of meat, butter, sugar and other food items were severely reduced. The summer months and the beginning of autumn, when it was still possible to buy food without ration cards in ordinary shops and canteens were no more than a distant memory.
Click on the below link to download NCERT Class 10 English Words and Expressions 2 From The Diary of Anne Frank

Download Printable Worksheets, test papers for Class 10 English with questions answers for all topics and chapters as per CBSE, NCERT, KVS sylabus
More..