INTRODUCTION
Muhammad Ghori defeated Prithviraj Chauhan in the Second Battle of Tarain in 1192 AD. It was an important event in the history of Medieval India. The result of the battle was the beginning of the Afghan-Turkish Rule in India. The Afghan-Turkish Rule lasted for 15 years, however, the successors of Muhammad Ghori assumed power in 1206 and ruled India successfully till 1526. Since these rulers called themselves as Sultans, this period in the history of India is called as the Sultanate period.
The period witnessed the rule of five dynasties of the Turkish-Afghan origin. These dynasties are as follow :
The Slave dynasty       –     1206-1290 AD
The Khalji dynasty       –    1290–1320 AD
The Tughlaq dynasty   –     1320-1414 AD
The Sayyid dynasty    –     1414-1451 AD
The Lodhi dynasty      –     1451-1526 AD
THE DELHI SULTANATE
The Rulers of Delhi :
Delhi became an important city only in the twelfth century.
Take a look at Table 1. Delhi first became the capital of a kingdom under the Tomara Rajputs, who were defeated in the middle of the twelfth century by the Chauhans (Also referred to as Chahamanas) of Ajmer. It was under the Tomaras and Chauhans that Delhi became an important commercial centre. Many rich jaina merchants level in the city and constructed several temples. Coins minted here, called Delhliwal, had a wide circulation.
The transformation of Delhi into a capital that controlled vast areas of the subcontinent started with the foundation of the Delhi Sultanate in the beginning of the thirteenth century. Take a look at Table 1 again and identify the five dynasties that together made the Delhi Sultanate. The Delhi Sultans built many cities in the area that we now know as Delhi. These were Delhi-I Kuhna. Siri and Jahanpanah. 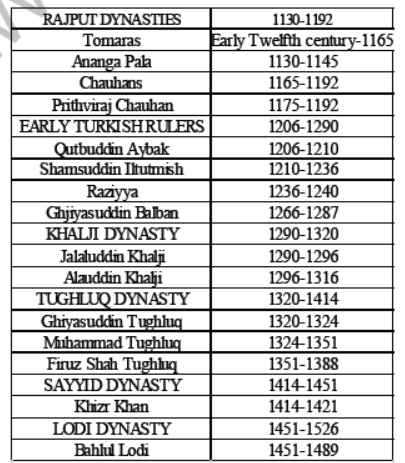 THE DELHI SULTAN
Finding out about the Delhi Sultans
Although inscriptions, coins and architecture, provide a lot of information, especially valuable are “histories”, tarikh (singular)/tawarikh (plural) written in Persian, the language of administration under the Delhi Sultans.
The authors of tawarikh were learned men; secretaries, administrators, poets and courtiers, who both recounted events and advised rulers on governance, emphasizing the importance of just rule.
Following are the additional details :
(1) the authors of tawarikh lived in cities (mainly Delhi) and hardly ever in villages.
(2) They often wrote their histories for sultans in the hope of rich rewards
(3) These authors advised rulers on the need to preserve an “Ideal” social order based on birthright and gender distinctions. Their ideas were not shared by everybody.
In 1236 Sultan Iltutmish’s daughter, Raziyya, became Sultan. The chronicler of the age, Minhaji Siraj, recognized that she was more able and qualified than all her brothers. But he was not comfortable at having a queen as ruler. Nor were the nobles happy at her attempts to rule independently. She was removed from the throne. 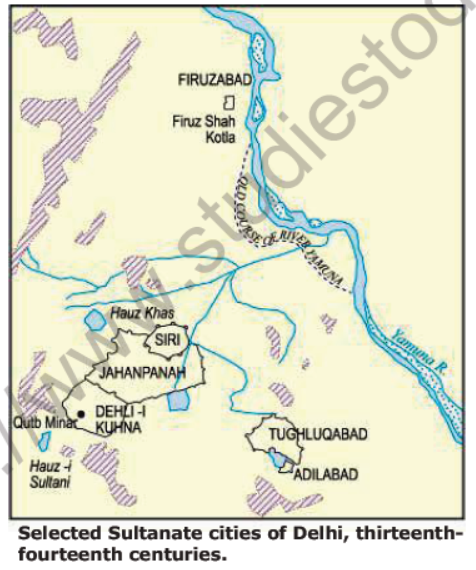 THE EXPANSION OF THE DELHI SULTANATE
From Garrison Town to Empire
In the early thirteenth century the control of the Delhi Sultans rarely went beyond heavily fortified towns occupied by garrison. The Sultans seldom controlled the hinterland of the cities and were therefore, dependent upon trade, tribute or plunder for supplies.
Controlling garrison towns in distant Bengal and Sind from Delhi was extremely difficult. Rebellion, war, even bad weather could snap fragile communication routes Delhi’s authority was also challenged by Mongol invasions from Afghanistan and by governors who rebelled at any sign of the Sultan’s weak- ness. The Sultanate barely survived these challenges. Its expansion occurred during the regions of Ghiyasuddin Balban, Alauddin Khalji and Muhammad Tughluq.
The first set of campaigns along the “internal frontier” of the Sultanate aimed at consolidating the hinterlands of the garrison towns. During these campaigns forests were cleared in the Ganga-Yamuna doab and hunter-gatheres and pastoralists expelled from their habitat.
These lands were given to peasants and agriculture was encouraged. New fortresses and towns were established to protect trade routes and to promote regional trade.
The second expansion occurred along the “external frontier” to the Sultanate. Military expeditions into southern India started during the reign of Alauddin Khalji and culminated with Muhammad Tughluq. In their campaigns, Sultanate armies captured elephants, horses and slaves and carried away precious metals.
By the end of Muhammad Tughluq’s reign, 150 years after somewhat humble beginnings, the armies of the Delhi Sultanate had marched across a large part of the subcontinent. They had defeated rival armies and seized cities. The Sultanate collected taxes from the peasantry and dispensed justice in its realm.
THE SLAVE DYNASTY
The Slave dynasty was founded in 1206 AD by Qutubuddin Aibak.
The prominent rulers of the Slave dynasty were.
Qutubuddin Aibak           – 1206-1210 AD
Shamsuddin Iltutmish     – 1210-1236 AD
Razia Sultana                 – 1236-1239 AD
Ghiyasuddin Balban        – 1266-1287 AD
Qutubuddin Aibak
Qutubuddin Aibak, who was a Turkish slave, a had played an important role in the expansion of the territories of Muhammad Ghori. He Declared himself the ruler after the death of Muhammad Ghori. He founded the Slave dynasty. His succesors were called Mamluk which means ‘slave’ or the son of a slave’.
Qutubuddin Aibak was very kind to all his subjects hence he was called as Lakhbaksh which means the ‘Giver of Lakhs’. He was successful in suppressing the internal revolts and external disturbances caused by the Mongols who invaded from the North-western part of India. Qutubuddin Aibak built the Qutab Minar in Delhi and also several mosques in Delhi and Agra. He did not live long as he fell from a horse and died.
Shamsuddin IItutmish
IItutmish was the slave and the son-in-law of Qutubuddin Aibak. He succeeded the throne and was conferred the title of Sultan. He was known for his efficient administration. Iltutmish introduced the following.
His army was organized.
He had the nobility, a select group of forty, called the Chalisa of Chahalgani.
He divided the empire into small units called Iqtas which were given to the nobles as salaries. He strengthened the North, western Frontier which protected the empire from the Mongols from Central Asia. The introduced Tankas-silver coins and Jitals-Copper coins.
The Qutab Minar at Delhi was completed by Iltutmish. He also built a mosque at Badaun and a tomb at Delhi. 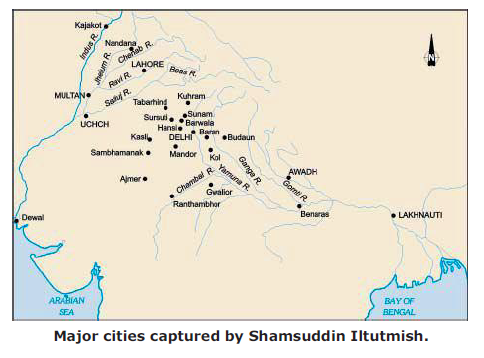 Razia Sultana was the daughter of Iltutmish who succeeded her father. She dressed like a man, rode horses and led her army. She was a brave ruler. However, the nobles could not accept Razia Sultana being a woman as a Sultan. The Clergy (ulema) and Nobility found it humiliating to work under her, hence they betrayed her and killed her in 1239 AD.

In 1266 AD, a Turkish slave called Balban took over the throne after the death of Razia Sultana. Balban is known for his firm policies and his efficient spy system. He successfully defeated the local enemies and defended his kingdom from all invasions. The Divine Right of Kingship was introduced by Balban. The justice was given to all and he was very firm in it. His policy is generally called as Blood and Iron Policy, because he mercilessly punished the robbers and zamindars, who did not accept him as ruler.

The death of Balban led to unrest in the empire. Balban’s grandson Kaiqubad ascended the throne but he was murdered by Jalaluddin Khalji who became the ruler and established the Khalji Dynasty.

The prominent rulers of Khalji dynasty were.

Jalaluddin Khalji was the founder of the Khalji Dynasty. He was very old when he became the king. He could not rule for a long time. His nephew Alauddin Khalji murdered him and became the ruler in 1296 AD.

Alauddin Khalji was a great invader and adopted expansion policy. He called himself as ‘the Alexander’. He built a city called Siri in Delhi and also constructed Alai Darwaza near the Qutab Minar.

Alauddin Khalji conquered Gujarat, Rajasthan, Malwa Devagiri, Warangal and Dvarasamudra. He man- aged the Mongols invasion by strengthening the forts. He took measures to prevent rebellions and stopped the intermixing of nobles. New reforms were introduced to collect revenues. Revenue was collected on the basis of measurement of the land. Special officers were appointed to collect the revenue. Alauddin introduced a market control system according to which the prices of all goods were fixed. There were three markets …. One for foodgrains, another for cloths, and the third one for slaves, animals and cattle.

People were strictly punished on any violation of rules and unauthorized competition. Alauddin also controlled the prices of essential commodities. In the army, he introduced a system called Huliya in which the army soldiers were recorded. A Dagh (branding of horses) was used for cavalry with a royal seal. The Spy system was very efficient and well organised. 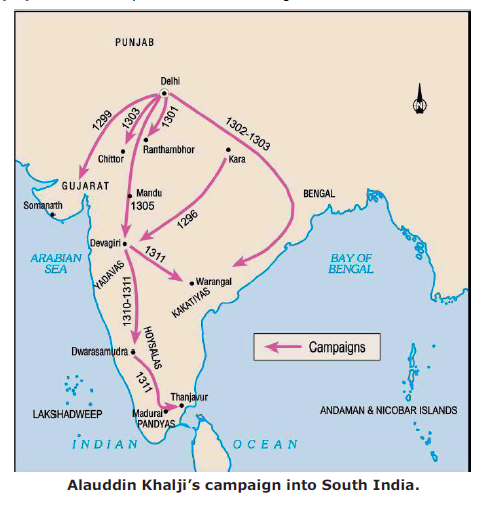 Ghiyasuddin Tughlaq was an efficient ruler and statesman, a good administrator and was able to establish peace in his territory. The famous Taghlaqabad Fort in Delhi was constructed by him but he died in 1325 AD in a mysterious circumstances.

Jauna Khan succeeded his father and took the title Muhammed-bin-Tughlaq in 1325 AD. The source of information was the writings of Moroccan traveler, Ibn Batuta.