• A particle is a point-like object, has mass but infinitesimal size

• Motion occurs when an object changes its position.

Both Distance and Time are important in describing motion.

• Sometimes you know motion has occurred even if you didn’t see it happen. (mail truck)

• Relative motion: when two objects are moving in a plane (either in same direction or opposite) each have relative motion with respect to second. e.g. a person sitting in a train and watching a tree, in this case tree is stable but is assumed to be moving but with respect to train.

• Distance: How far an object has moved. It has only magnitude without direction. (total)

• Displacement: How far and in what direction an object has moved from its start position. i.e. the direct distance between two points.

• Changing speed: Riding a bike for 5 km. Take off and increase speed, slow down up hill, speed up down hill, stop for stop sign. The trip took you 15 min (.25 h)

• Instantaneous speed: speed at any given time.

• Should you be seeking shelter?

• Suppose two trains are going with the same speed in opposite direction so they are having different velocities.

• Race car going around an oval track might have constant speed, but different velocities at each point.

• Any change in velocity over a period of time is called acceleration. 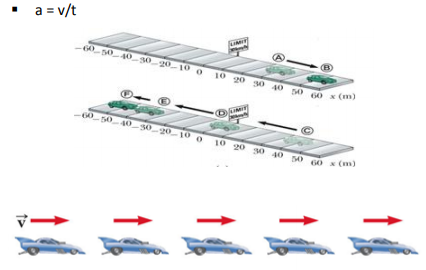 Access CBSE Class 9 Science MCQs for MCQs for important topics for all chapters in MCQs based on CBSE and NCERT pattern. Access full database of...
More..

Central Board of Secondary Education, CBSE is to conduct the 10th and 12th Board Examination 2020 from February 15, 2020. Due to University Admissions, CBSE has shifted Board Exams dates from 1 March to February 15 from 2019. This year too CBSE would be making changes...