1. Ionisation of gases in the discharge tube proved that atoms have subatomic particles

2. Summary of characteristics of electrons, protons and neutrons 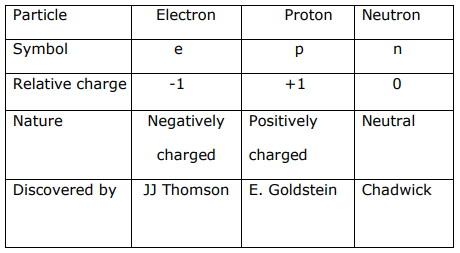 4. Limitations of Thomson model of atom: Model failed to explain how protons and electrons were arranged in atom so close to each other

5. α -particles are charged particles having two units of positive charge and 4 units of mass, i.e. they are doubly charged helium ions(He2+)

6. Observations predicted from α -particle scattering experiment by Rutherford based on Thomson model of atom:

Rutherford expected that if the model proposed earlier by J.J Thomson, according t0 which there is uniform distribution of positive and negative charge, was correct then α-particle particles striking the gold atoms would be uniformly deflected which was not the case.   Since the -particles were much heavier than the protons, he did not expect to see large deflections

Since α -particles are easily absorbed by objects; he wanted to ensure that alpha particles pass through foil without getting absorbed.

If α -particles were absorbed in matter then they would not be able to give any useful information about insight of atom.

Only if α-particles were deflected then only it can give useful information about insight of atom. Gold is easily malleable and can be beaten into very thin sheets.

8. Observations made by Rutherford from  α-particle scattering experiment:

1. Most of the α-particles passed straight through gold foil without suffering any deflection from their original path

2. Some of the α -particles were deflected by the foil by small angles

3. One out of every 12000 particles appeared to rebound

9. Conclusions from Rutherford’s model of an atom

1. Most of the space between inside atoms is empty; hence it allows the α particles to pass straight through it without any deflection

2. Very few particles were deflected from their path which suggests that the positive charge of the atom occupies very little space

3. The total volume occupied by a nucleus is very small compared to the total volume of the atom, as very few  α particles are reflected by 180o and all the positive charge and mass of the gold atom were concentrated in a very small volume within atom.

10. Rutherford’s model of an atom

1. There is positively charged centre in an atom called the nucleus and the entire mass of atom resides in the nucleus

2. Electrons revolve around the nucleus in well defined orbits

3. Size of nucleus is very small as compared to size of atom

11. Defects in Rutherford model of atom:

1. Rutherford had proposed that electrons move around a positively charged nucleus at very high speed in circular orbi To remain in a circular orbit electron would have to be accelerated centripetally (tending to move toward a center). But according to electromagnetic theory if charged body (electron) is accelerated around another charged body (nucleus) then there would be continuous radiation of the moving body (i.e. electron). This loss of energy would slow down speed of electron and eventually electron would fall into nucleus. But Rutherford’s model could not explain such a collapse

2. Rutherford had proposed that electrons revolve around the nucleus in fixed orbi He did not specify the number of electrons in each orbit

12. Postulates put forward by Bohr regarding model of atom:

1. Electrons revolve around the nucleus in a limited number of orbits called discrete orbits of electrons or also called as permissible orbits

2. While revolving in discrete orbits the electrons does not radiate energy i.e. energy of an electron remains constant so long as it stays in a given orbi Electrons present in different orbits have different energies

13. Bohr-Bury scheme for distribution of electrons in different orbits

2. Outermost orbit of an atom can accommodate a maximum number of 8 electrons

14. Combining capacity of an atom is called its valency

15. Outermost shell of an atom is called valence shell

17. If the outermost shell of an atom is completely, its valency is 0

21. Atomic number(Z) is defined as the total number of protons present in nucleus of an atom

22.Protons and neutrons together are called nucleons

23.Mass number (A) is defined as the sum of the total number of protons and neutrons present in the nucleus of an atom.

2. Cobalt isotope ( 60U ) is used to remove brain tumours and in their treatment 27

3. Isotope of sodium ( 24Na)has been used to diagnose restricted circulation of blood 11

25. Isobars are the atoms of different element with different atomic number but same mass number

Download Worksheets for Class 9 Chemistry made for all important topics and is available for free download in pdf, chapter wise assignments or booklet with...
More..