1. What are the difficulties that you would face in classification of animals, if common fundamental features are not taken into account?

Answer: The present form of classification starts with grouping organisms based on broad common fundamental features like arrangement of cells, body symmetry, nature of coelom, patterns of digestive, circulatory or reproductive systems. If these features are not taken into account, the animals will be classified

 There will be no phylogenetic relationship between the classified groups. For example, if birds and bats are classified in one group on the basis of the ability to fly, it will result in wrong classification as they are completely different organisms.

Millions of organisms have been discovered to date and there are still more to be discovered. With this humungous number of varied forms of organisms it becomes imperative to classify them by common fundamental features based on morphological, anatomical and genetic features thereby resulting in a classification which shows the phylogenetic relationship.

2. If you are given a specimen, what are the steps that you would follow to classify it? 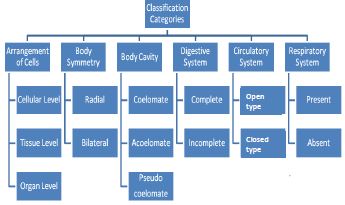 3. How useful is the study of the nature of body cavity and coelom in the classification of animals?

Answer: Coelom is a fluid filled cavity formed between the gut wall and the body wall lined by the mesodermal cells. Presence or absence of coelom is an important criterion for animal classification. The animals with bilateral symmetry are further classified into three types of groups based on the presence or absence of coelom. They are as follows: 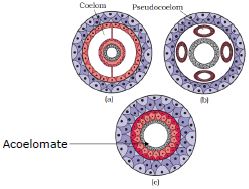 Figure: Three types of body cavity: (a)True coelom as seen in coelomates, (b)Patches of coelom between the ectoderm and the endoderm as seen in pseudocoelomates& (c)Mesodermal cells present but no body cavity as seen in acoelomates

5. What is the difference between direct and indirect development?

6. What are the peculiar features that you find in parasitic platyhelminthes?

Answer: The peculiar features of parasitic platyhelminthes are as follows:

b)They have an extra coating (of glycocalyx) to protect themselves from being digested in the gut.

c) They absorb nutrients from the host directly through their body surface.Their digestive systems are less evolved as compared to the free living platyhelminthe

e)Parasitic flat worms are mostly hermaphrodite ensuring reproduction in the host. The reproductive capacity is enhanced with most of their body lumen packed with testes and eggs.

7. What are the reasons that you can think of for the arthropods to constitute the largest group of the animal kingdom?

a. Arthropods are very diverse in structure and form.
b. The diversity in form is responsible for their dispersion into varied habitats. Arthropods are known to inhabit the ocean depths to the tallest mountain peaks.
c. Their hard exoskeleton made of chitin is tough and protects the animal from extreme dryness. The exoskeleton is also insoluble in water and weak alkaline and acidic solution
d. They have joint appendages that allows for efficient and precise movements. Many appendages are modified to meet the need of the arthropod for a specific foraging behavior or a habitat.
e. Their reproductive cycle is short and the female lays numerous eggs at one time.

8. Water vascular system is the characteristic of which group of the following:

Answer: Water vascular system is the characteristic of Echinodermata.

Answer: To understand the above statement, one needs to define the two words – notochord and vertebra – from which the terms chordates and vertebrates are derived, respectively.

Notochord: The notochord is a flexible rod-shaped structure found in embryos of all chordates.

Vertebral column: The vertebral column, also known as backbone or spine, is a bony structure found in vertebrates. It is formed from individual bones called vertebrae.

Chordata is a phylum which is divided into three sub phyla - Urochordata, Cephalochordata and Vertebrata. All the chordates at some point of their lives possess a notochord. However, in vertebrates, this notochord is replaced by the vertebral column in the adult stage. Hence it is right to state that “All vertebrates are chordates but all chordates are not vertebrates”.

10. How important is the presence of air bladder in Pisces?

Answer: Air bladder/ swim bladder is a sac filled with air that regulates buoyancy in fishes. It plays a very important role in Pisces. The fishes (like Osteichthyes) where air bladder is present, it plays the following roles:

 The air bladder controls the buoyancy by enabling the fish to stay at a particular water depth without having to waste energy in swimming continously.

 It acts as a resonating chamber to produce or receive sound.

In another kind of fishes (like Chondrichthyes), air bladder is absent. Therefore these fishes have to swim constantly to avoid sinking resulting in consumption of lot of energy.

11. What are the modifications that are observed in birds that help them fly?

Answer: Some of the modifications that help birds to fly are listed below:

a)The forelimbs are modified into wings

b)Birds have feathers that helps them fly, steer and balance

e)Birds have well developed eye sight and brains that help them gauge any approaching danger as well as to forage for food.

12. Could the number of eggs or young ones produced by an oviparous and viviparous mother be equal? Why?

Answer: An oviparous mother lays more eggs at one time as compared to the number of offspring a viviparous mother gives birth to at any given time. This is because of the following reasons:

 In oviparous mother, the eggs are laid soon after fertilization, or eggs are externally fertilized. Therefore many eggs can be laid at one time. This also provides evolutionary advantage as many eggs are liable to be eaten, destroyed during the period of development.

 In the case of the viviparous mother, she has to house the embryo in the uterus till the full term of development. The embryo also draws nutrition from its mother. The mother thus is constrained by space in the uterus.

13. Segmentation in the body is first observed in which of the following:

15. Prepare a list of some animals that are found parasitic on human beings? 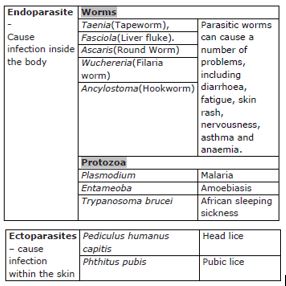