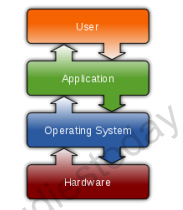 Functions of an Operating System

The major functions of an OS are:

-standard means of communication between user and computer. 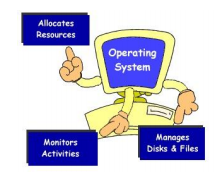 Need of an Operating System:

At the simplest level, an operating system does two things:

1. It manages the hardware and software resources of the system. In a desktop computer, these resources include such things as the processor, memory, disk space, etc. (On a cell phone, they include the keypad, the screen, the address book, the phone dialer, the battery and the network connection.

2. It provides a stable, consistent way for applications to deal with the hardware without having to know all the details of the hardware.

It deals with running multiple processes. Most operating system allows a process to be assigned a priority which affects its allocation of CPU time. Interactive operating systems also employ some level of feedback in which the task with which the user is working receives higher priority. In many systems there is a background process which runs when no other process is waiting for the CPU.

It is the act of managing computer memory. The essential requirement of memory management is to provide ways to dynamically allocate portions of memory to programs at their request, and freeing it for reuse when no longer needed. This is critical to the computer system. Several methods have been devised that increase the effectiveness of memory management. Virtual memory systems separate the memory addresses used by a process from actual physical addresses, allowing separation of processes and increasing the effectively available amount of RAM using paging or swapping to secondary storage. The quality of the virtual memory manager can have an extensive effect on overall system performance.

Disk and file systems:
Operating systems have a variety of native file systems that controls the creation, deletion, and access of files of data and programs.

Networking:
A computer network, or simply a network, is a collection of computers and other hardware components interconnected by communication channels that allow sharing of resources and information.[1] Where at least one process in one device is able to send/receive data to/from at least one process residing in a remote device, then the two devices are said to be in a network. Simply, more than one computer interconnected through a communication medium for information interchange is called a computer network.
Networks may be classified according to a wide variety of characteristics, such as the medium used to transport the data, communications protocol used, scale, topology, and organizational scope.

Security:
Most operating systems include some level of security.

Language Processor
Assembler:
It is a computer program to translate between lower-level representations of computer programs; it converts basic computer instructions into a pattern of bits which can be easily understood by a computer and the processor can use it to perform its basic operations

Compiler:
A compiler is a computer program (or set of programs) that transforms source code written in a programming language (the source language) into another computer language (the target language, often having a binary form known as object code). The most common reason for wanting to transform source code is to create an executable program.
A compiler can translate the programs of only that language for which it is written. For example C++ compiler can translate only those programs, which are written in C++. Each machine requires a separate compiler for each high level language.

Interpreter:
An interpreter is a program that converts one statement of a program at a time. It executes this statement before translating the next statement of the source program. If there is an error in the statement, the interpreter will stop working and displays an error message.
The advantage of interpreters over compilers is that an error is found immediately. So the programmer can make corrections during program development.

Utility Software:
Utility software is system software designed to help analyze, configure, optimize or maintain a computer.
A single piece of utility software is usually called a utility or tool.
Utility software usually focuses on how the computer infrastructure (including the computer hardware, operating system, application software and data storage) operates. Due to this focus, utilities are often rather technical and targeted at people with an advanced level of computer knowledge - in contrast to application software, which allows users to do things like creating text documents, playing games, listening to music or viewing websites.

Download Free printable worksheets for Class 11 Informatics Practices designed by expert teachers for all important chapters and topics and is available for...
More..

Download free Printable Worksheets, test papers with questions and answers for Class 11 Informatics Practices for all important topics and chapters as per CBSE...
More..