CBSE Class 6 Science Motion and Measurement of Distances Exam Notes. There are many more useful educational material which the students can download in pdf format and use them for studies. Study material like concept maps, important and sure shot question banks, quick to learn flash cards, flow charts, mind maps, teacher notes, important formulas, past examinations question bank, important concepts taught by teachers. Students can download these useful educational material free and use them to get better marks in examinations.  Also refer to other worksheets for the same chapter and other subjects too. Use them for better understanding of the subjects.

Motion and Measurement of Distances

WHAT IS MOTION
We see many things moving around us. A boy walking along a road, a man running a race, a boy driving a car, a speeding truck.
In all these examples you will observe that the bodies keep on changing their position with respect to other objects. When we consider whether a body is moving or not, we usually take stationary objects such as trees, houses, electric poles on the surface of the earth as references.

REST
A body is said to be at rest (or in a state of rest) when it does not change its position with respect to its surrounding objects. For example, buildings, plants are all at rest.

Translatory Motion: Translatory motion is that in which all the particles of a body moves along a straight path with same speed. The motion of a drawer of a table, a moving car or train, the movement of an aeroplane, a boy sliding down a slope, stone hurled from a catapult are some examples of translatory motion. 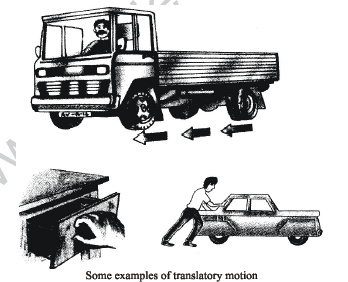 Circular Motion: When an object moves about a fixed point keeping the distance same, then the object
is said to be an circular motion. Motion of earth about sun, motion of moon about earth are the examples of circular motion.

Rotatory Motion: Rotatory motion is that in which a body moves about a fixed axis without changing its
position. 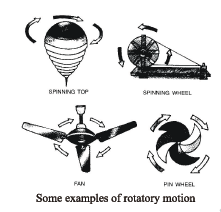 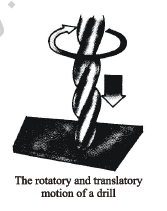 The motion of a swing and the pendulum of a clock show oscillatory motion.


Following are the fundamental quantities in this system:

Depending on direction, quantities are further classified as,

More about some quantities to understand motion

Distance and Displacement: Consider an object moves in a curvilinear path from A to B as shown below:

Here the object moves along A x y z B. The total length of the path is called distance.

But the shortest distance from the critical position A to the final position B is called the displacement of the object. There is a clear sense of direction when we describe the term displacement. Hence displacement is a vector quantity where as distance is a scalar quantity.

Speed: It is the distance travelled by any object in unit time.

Velocity is the speed in a particular direction.

Consider these two cares are moving in opposite directions. One may say, one of them is moving in (+) direction and the other in (–) direction. Thus, speed and direction together is called as velocity. Therefore, we say theri speeds are respectively 8 m/s and 10 m/s but the velocities are +8 m/s and –10 m/s. Note that speed is scalar quantity and velocity is a vector quantity.

Acceleration: If in a motion the velocity of an object changes then it is called a non-uniform motion or accelerated motion. Here, acceleration is the rate of change of velocity.

For example, let an object is moving with an initial velocity (u) of 5 m/s and after some time t = 5 sec its final velocity (v) becomes 15 m/s. The rate of change in velocity.