CBSE Class 6 Science Food Where Does it Come from Exam Notes. There are many more useful educational material which the students can download in pdf format and use them for studies. Study material like concept maps, important and sure shot question banks, quick to learn flash cards, flow charts, mind maps, teacher notes, important formulas, past examinations question bank, important concepts taught by teachers. Students can download these useful educational material free and use them to get better marks in examinations.  Also refer to other worksheets for the same chapter and other subjects too. Use them for better understanding of the subjects.

FOOD: Where does it come from?
Food is any substance that is consumed to fulfill nutritional requirement of the body. It is usually of plant or animal origin, contains essential nutrients such as carbohydrates, fats, proteins, vitamins, or minerals. Food is ingested by an organisms and assimilated by its cells in an effort to produce energy, maintain life, and stimulate growth. 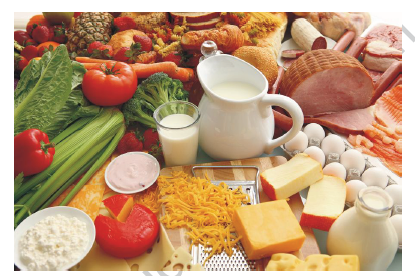 Food Variety
Food variety means a wide range of foods from within and across each of the five food groups.Eating a variety of foods in amounts recommended can help prevent diseases such as diabetes, cancer and cardiovascular disease.
Five major food groups: The major food groups are: 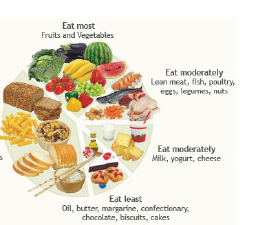 It is important that we eat a balanced diet with foods from each of the five major food groups. Each food group contains at least one nutrient (called the ‘characterizing’ nutrient) for whcih it makes a particularly rich contribution to the total diet. For example, the milk group is knwon as a rich source of protein, calcium and riboflavin

In each food group, different foods provide more of some nutrients than others. If we eat a variety of foods from each group, we will probably get all the nutrients provided by the foods in that group. For example, some vegetables contain vitamin C (capsicums), while others (asparagus and spinach) are high in folate. Most of the variety in your foods should come from plant foods (fruits, vegetables and grains). Almost all foods are of plant or animal origin. Cereal grain is a stable food that provides more food energy word wide than any other type of crop. Maize, wheat, and rice-in all of their varieties - account for 87% of all grain production worldwide. Other foods not from animal or plant sources includes various edible fungi, especially mushrooms. Fungi and bacteria are used in the preparation of fermented and pickled foods like leavened bread, alcoholic drinks, cheese, pickles, kombucha, and yogurt. Another example is blue-green algae such as Spirulina. There are around 2,000 plant species which are cultivated for food, and many have several distinct cultivars.
Seeds of plants are a good source of food for animals. Edible seeds include cereals (maize, wheat, rice, et cetera), legumes (beans, peas, lentils, et cetera) and nuts.
Oil seeds are often pressed to products oils - sunflower, flaxseed, rapeseed (including canola oil) sesame, etc. All seeds are not edible, large seeds, such as those from a lemon, pose a choking hazard, while seeds from apples and cherries contain a poison (cyanide).
Fruits are the ripened ovaries of plants, including the seeds within.

Some botanical fruits, such as tomatoes, pumpkins, and eggplants, are eaten as vegetables. Vegetables are a second type of plant matter that is commonly eaten as food. These include root vegetables (potatoes and carrots), leaf vegetables (spinach and lettuce), stem vegetables (bamboo shoots and asparagus), and inflorescence vegetables (globe artichokes and broccoli).

Food products produced by animals include milk produced by mammary glands, which in many cultures is drunk or processed into dairy products (cheese, butter etc.).

Apart from milk, milk products and meat there are other animal products like eggs (from birds and other animals) and honey reduced rechor from flowers, produced by bees). 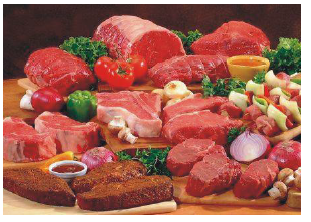 Several parts of a plant are used for food. These are:

1.Fruits: Most fruits are food sources of Vitamin C. Vitamin C is food for healing cuts and wound Examples of fruits are lemons, lime, pineapple and strawberries.

Squash, carrots, sweet potatoes are rich in Vitamin A. White bananas are rich in carbohydrates and potassium. Cocoa is made into chocolate.

2. Seeds: Seeds of most plants are also used as food. String beans and soybeans are example of seeds used as food, both have high protein content. Peanuts is used for making mayonnaise and cooking oil, while cashew nuts is a good source of Vitamin D, iron, thiamine and soil.

3. Stems: The stems make up the largest part of the plant. Most stems grow upward and support the leaves which enables the leaves to receive sunlight. The stems of some plants, including potatoes are partly grown underground. Examples plant stems which are edible are sugarcanes and young bamboo shoot Tender stems of leafy vegetables are made as salads and used for garnishing.

4. Leaves: The leaves are chief organs in photosynthesi Chlorophyll in the leaves absorb light energy from sunlight. The food formed from this process is used for growth and repair.

Leaves of edible plants are made into vegetables salads and main ingredients for some recipes. Celery and lattuce are used as salad ingredients.

5. Flowers: Flowers contain are reproductive parts of flowering plant They develop from buds on a stem some plants produce only one flower. Others have large clusters of lowers. Banana blossoms, flowers of squash are few examples used as food.

6. Grains: Grains used as food are rice and corn which are the staple food of most Asian. Bread, waffle pancakes and noodles are made from grain Wheat is rich in protein and gluten.

A large part of what people eat is made up of plants or parts of plants. In fact, plants contain many of the nutrients that help us live healthy lives.

Are organisms that are anatomically and physiologically adapted to eat plant - based foods. Herbivora is derived form the Latin herba meaning a small plant or herb, and vora, from vorare, to eat or devour.

Leaf Miners: Feed on leaf tissue between the epidermal layers, leaving visible trails (organisms that make there own food). 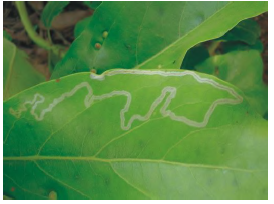 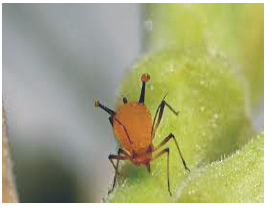 A carnivore meaning ‘meat eater’ (Latin ca r n e mea ning ‘fles h’ a nd vo r a re meaning ‘to devour’), is an organisms that der ives it s ener gy a nd nu t r ient requirements from a diet consisting mainly or exclusively of animal tissue, whether through predation or scavenging. 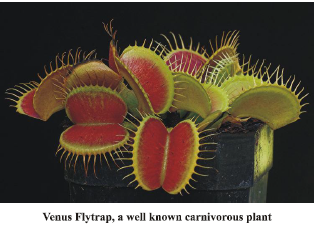 Animals that depend solely on animal flesh for t heir nu t r ient r equ ir ement s a r e considered obligate carnivores while those that can also consume non-animal food when animal food is not available are considered facultative carnivores. Plants that capture and digest insects are called carnivores plants. 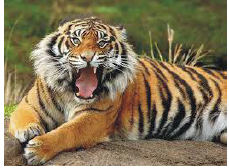 The earliest carnivores mammal is considered to be the Cimolestes that existed during the Late Cretaceous and Tertiary Periods in North America about 65 million years ago.

♦All feliforms, such as domestic cats, big cats, hyenas, mongooses.

♦Most caniforms, such as the dogs, wolves, foxes, ferrete, seals and walruses.

♦All cetaceans, such as dolphins, whales and porpoises

♦The carnivores marsupials, such as the Tasmanian devil.

♦All crocodilians, such as alligators, crocodiles, gharials and caimans.

♦All preyine birds such as hawks, eagles, falcons and all vultures (Old and New World).

♦All snakes, such as cobras, vipers, pythons and boas.

♦Some lizards, such as most skinks and all monitor lizards.

♦some turtles, including the alligator snapping turtle and most sea turtles.

♦Most anurans, such as frogs and toads

♦All sharks, such as tiger, great white, nurse and reef sharks

♦Many bony fish, such as tuna, marlin, salmon and bass

♦Some crustaceans, such as the coconut crab, though mainly omnivorous, will prey on turtle hatchlings, smaller crab, species, rats and carrion.

♦ Some molluscs, such as octopus and squid and some gastropods.

♦Most arachnids, such as spiders and scorpions.

♦Many insects, such as mantises, dragonflies and most wasps.

♦All jellyfish and sea stars

Omnivores (from Latin: omni all, everything; vorare to devour) are species that eat both plants and animals as their primary food source.

Americans waste a lot of food. It has been estimated that as much as 1.3 pounds of food per person per day goes to waste. Wasting less food is better not only for the environment but for your pocketbook. Of course, some food waste is unavoidable, especially if you have picky eaters in your family. Sometimes, you just can’t get a child to eat something you thought he or she would enjoy. But many other forms of food waste can be handled better. Start off with how you handle your grocery shopping. Thin not only about how much you’re buying, but how soon it will go bad. Food storage can make a big difference. Some fruits can stay out for weeks and not have a problem. Others go had in days, even in the refrigerator. The same goes for vegetables, meats of course, need refrigeration, but they can also freeze quite nicely. If you separate your meat out into the quantities you will need for cooking later, you can buy meat in bulk, and freeze only the excess. Remember that much of your food waste does not need to go into the trash, much of it can be composted instead. Citrus and onions don’t go in the compost so well, especially if you use worms, but other food reminants will do quite well. Then you have great fertilizer for your yard and garden. Wasting less food is one of the simplest things we can do for the world around us. You don’t have to go to great lengths to make a difference. Best of all, it’s one of the few environmentally friendly things you can do that is easier on your pocketbook and might even help you get fit.

The process of obtaining food necessary for good health and growth is called nutrition.

i) It provides us energy to maintain body temperature and to do work.

ii) It makes new materials necessary for growth and reproduction.

iii) It helps us to keep the body healthy.

iv) It help us in repairing or replacing damage cells and tissues in the body.