CBSE Class 6 Science Fun with Magnets Exam Notes. There are many more useful educational material which the students can download in pdf format and use them for studies. Study material like concept maps, important and sure shot question banks, quick to learn flash cards, flow charts, mind maps, teacher notes, important formulas, past examinations question bank, important concepts taught by teachers. Students can download these useful educational material free and use them to get better marks in examinations.  Also refer to other worksheets for the same chapter and other subjects too. Use them for better understanding of the subjects.


Nearly 5,000 years ago, people of Magnesia, a province in Asia Minor, discovered that a particular type of rock could attract small pieces of iron towards it. This wonderful rock was named Magnetite after Magnesia, the place where magnetic iron ore was first.

WHAT ARE MAGNETS?
Any substance which possesses the following two properties is called a magnet.
1. It attracts small pieces of iron towards itself.
2. It always comes to rest in the north-south direction when suspended freely.

NATURAL AND ARTIFICIAL MAGNETS
Lodestone and magnetites are natural magnets because they are found in nature.
Artificial magnets are prepared by man to be used at any time and at any place. These magnets are much stronger than lodestone.

PROPERTIES OF MAGNETS
Let us now study some important properties of magnets.

1. Poles of a Magnet: The two ends of a magnet where the magnetic force is maximum are called the poles of the magnet. Each magnet has two poles. 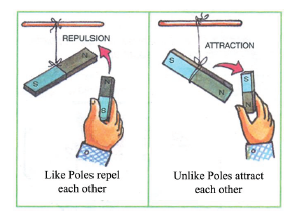 4. Magnetic Poles Always Exist in Pairs: If a bar magnet is broken into two pieces you will see that each piece behaves as a whole magnet. This shows that new poles are formed at the broken ends as shown in figure. If these pieces are broken again, each smaller piece still remains a whole magnet with two opposite poles. Even a very small piece of a magnet is a whole magnet.

A magnetic compass is a simple device which has a magnetic needle (free to rotate) on a pivot at the centre of a round box as shown in figure. It is used by sailors and navigators to know the northern, souther, eastern and western directions. In the compass, the needle which is free to rotate, always rests in the north-south direction. 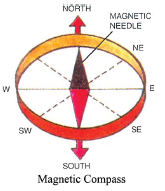 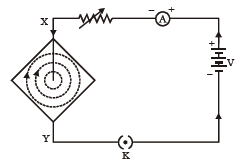 Right Hand Thumb Rule: The direction of the magnetic field associated with a current carrying straight conductor can be obtained by applying the “right hand thumb rule”. According to this rule:

Hold the current carrying conductor in your right hand such that the thumb Field mpoints in the direction of current, then the direction in which your fingers
encircle the conductor will give the direction of the field lines of the magnetic
field.
Magnetic Field due to a Current through a Circular Loop: When a current is passed through the circular coil, a magnetic field is produced around it. The pattern of magnetic field lines is shown in the figure. The field lines are circular near the wire but they become straight at the centre of the coil. 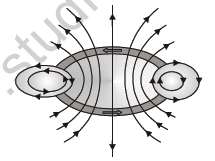 Earth Magnetism: The earth is also a huge magnet whose poles and the nature of the magnetic field is
shown below: 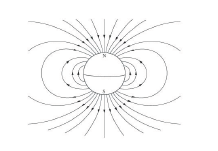 We shall learn more about magnetism in higher classes.