Notes Class 7 Triangles and Its Properties

The Triangle and its Properties

A triangle is a closed figure made of three line segments. Every triangle has three sides, three angles, and three vertices. These are known as the parts of a triangle. The sides and the angles of every triangle may differ from one another; therefore, they do not look alike.

Triangles can be classified based on their sides and angles.

Median and Centroid of a triangle

The three medians of a triangle meet at one point inside the triangle. This point is called the
centroid.

Three altitudes of a triangle always intersect at one point, called the orthocentre. 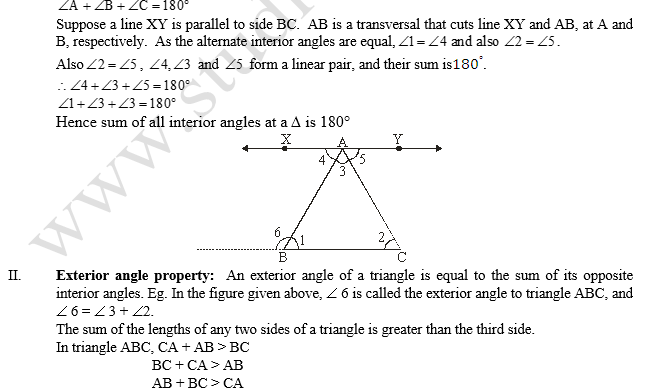 Right Angled Triangle: In a right-angled triangle, the side opposite the right angle is called the hypotenuse, and the other two sides are called its legs.

In a right-angled triangle, the square of the hypotenuse is equal to the sum of the squares of the other two legs. i.e. a2 = b2 + c2

If the Pythagoras property holds, then the triangle must be right-angled. That is, if there is a triangle such that the sum of the squares on two of its sides is equal to the square of the third side, then it must be a right-angled triangle. The angle opposite to the third side is right angle.

Solution: In the given figure,

Example 2: Find angles x and y in the following figure.

Solution: In the given figure,

Example 4: A 15 m long ladder reached a window 12 m high from the ground on placing it against a wall at a distance ‘a’ metre from the wall. Find the distance of the foot of the ladder from the wall.

By using Pythagoras theorem, We have

Thus the ladder is 9 m away from the foot of the wall.

Example 5: If in a right angle isosceles triangle area is 32 cm2 . Find the sides of the triangle.

Example 6: Find the perimeter of a rectangle whose length is 40 cm and the length of one of the diagonal is 41 cm.

Now in DABC, AB ⊥ BC

Solution: Check whether the sum of any two sides is greater than the third side or not:

Therefore, these measurements can be the sides of a triangle.

Please click the link below to download pdf file for CBSE Class 7 The Triangle and its Properties Concepts.

Download Worksheets for Class 7 Triangles and Its Properties made for all important topics and is available for free download in pdf, chapter wise assignments...
More..

Download Printable Worksheets, test papers for Class 7 Triangles and Its Properties with questions answers for all topics and chapters as per CBSE, NCERT, KVS...
More..