Download PDF
Photoshop Continued
Photoshop Vector tools
Vector shapes are lines and curves you draw using the shape or pen tools. Vector shapes are resolutionindependent— they maintain crisp edges when resized, printed to a PostScript printer, saved in a PDF file, or imported into a vector-based graphics application. You can create libraries of custom shapes and edit a shape’s outline (called a path) and attributes (such as stroke, fill color, and style).Paths are outlines that you can turn into selections, or fill and stroke with color. You can easily change the shape of a path by editing its anchor points. A work path is a temporary path that appears in the Paths panel and defines the outline of a shape.
You can use paths in several ways:
Use a path as a vector mask to hide areas of a layer
• Convert a path to a selection.
• Fill or stroke a path with color.
Designate a saved path as a clipping path to make part of an image transparent when exporting the image to a page-layout or vector-editing application 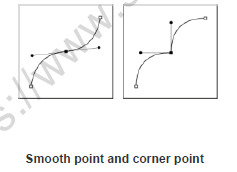 Download Worksheets for Class 8 Computer Science made for all important topics and is available for free download in pdf, chapter wise assignments or booklet...
More..