CBSE Basic Concepts for Class 11 English -The Canterville Ghost .Revision worksheets, Sample papers, Question banks and easy to learn study notes for all classes and subjects based on CBSE and NCERT guidelines. Students and parents can download free a collection of all study material issued by various best schools in India. The study material has been carefully compiled by the best teachers in India. The students should practice the questions database to get better marks in examination. Please refer to other links for free download of high quality study material. Based on CBSE and NCERT guidelines. Based on the same pattern as released by CBSE every year. Study material for final/ term/ SA1/ SA2 Examinations conducted by various schools affiliated to Central Board of Secondary Education (CBSE) in India and abroad. CBSE Study material has been compiled to help students preparation which will helps the students to concentrate more in areas which carry more marks.

1. Mr. Hiram B-Otis : the American Minister he is new owner of the Chase.

5. The Twins Mr. and Mrs. Otis's youngest sons, called The Stars and Stripes

8. Duke of Cheshire : a young friend of family.

Mr. Hiram B. Otis. an American Minister wished to purchase conterville chase though his friends warned his against buying the haunted house soon after moving into the conterville chase, Mrs. Otis noticed a blood-stain on the floor near the fire place. However, the Otis reiterated that they were not afraid of the ghosts. The next morning the blood stain was found again. The family decided to go out for a drive to distract their minds. They avoided any mention of super natural in their conversation. Even when the ghost appeared before the Otis, he was taken a back at the unexpected reactions of members of the Olis family. The ghost got furious and decided to take revenge. The Otis decided to take revenge. The Otis family was amused on noticing that the blood stain kept changing colour. Only person

However, he was excited to discover his distant connection with Duke of Cheshire. In order to show his relation he planned to appear before Virginia's lover but his fear of the twins forbade him to otis out. On meeting the ghost Virginia broke the news to him about the twins going back. The ghost confided in Virginia about his wife being careless in repair work and horraible at cooking. The ghost pleaded before Virginia to weap and pray for him so that the angle of death would show mercy on him. Virginia agreed to help and pray for the ghost.

Virginia's consequent disappearance became a cause of concern and worry for the Otis fanily. Duke of Cheshire accompained Mr. Otis in his search for Virginia. Mr. Otis was touched by the Duke's concern for his daughter. At midnight, Virginia appeared mysteriously and to everyone's surprise said that she had been with the said ghost. She told them that ghost was dead. Four days later, a funeral procession was held Virginia's eyes were full of tears. She was told to keep the box of jewels gifted to her by the ghost. Following her marriage with the Duke of Cheshire and their honeymoon, Virginia visited the grave and strewed lovely roses on it. She told her husband that Sir Simon made her see "what life is and what death signifieds and why love is stronger than both." 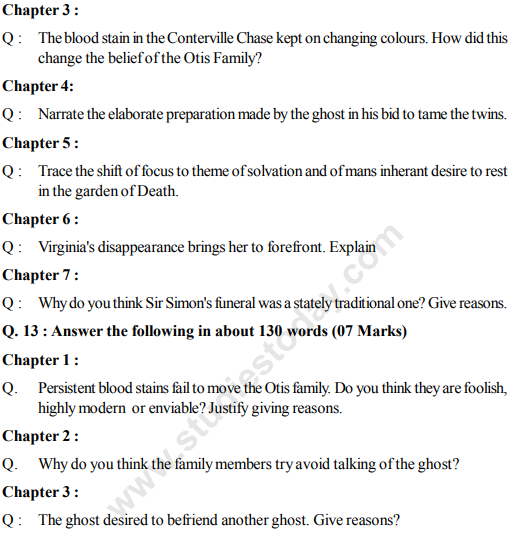