FLASH
Macromedia Flash is a professional standard tool used to produce high-impact web pages and web sites that includes a good amount of animation, sound, graphics and interactivity. The extension of a Flash file is .fla
To open the flash window, perform the following steps:
1. Click the start menu.
2. Go to Programs.
3. Click at Macromedia Flash.
4. Click Flash.

The following screen appears:
The white rectangular area within the window is called the Stage or Workspace. Any graphics placed in this area will be visible to the user. On the left side of the window appears the toolbox that contains all the drawing tools in Flash.
As the Flash window is opened, an unsaved document appears called as Movie 1. A Flash movie is further divided into number of Scenes.
A Scene can be considered as a chapter in a book. The advantage of breaking a movie into scenes is, every scene can be accessed individually and thus the sequence or order of the scenes can be changed. The default name of the first scene of the movie is Scene 1.
Every scene can be further divided into Layers, which can be considered as a topic in a chapter. Images or text can be stored in the form of layers so that the animations can be controlled independently.
Every image in the Layer is called a Frame. The frames are the little rectangular cells, which are numbered. The contents of only one frame can be seen at a time.
The red marker on the frame indicates the frame that is currently viewed. 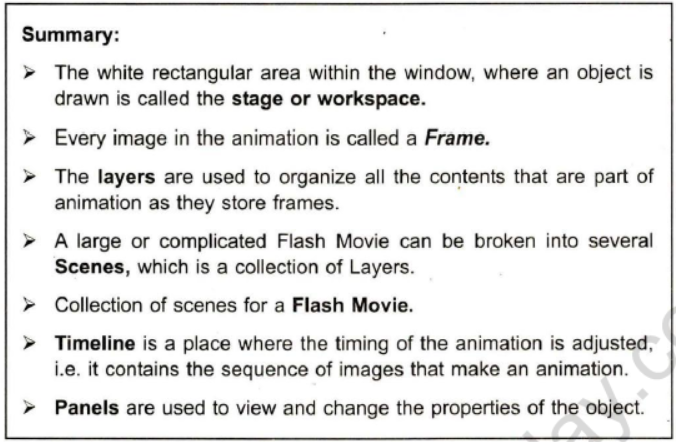 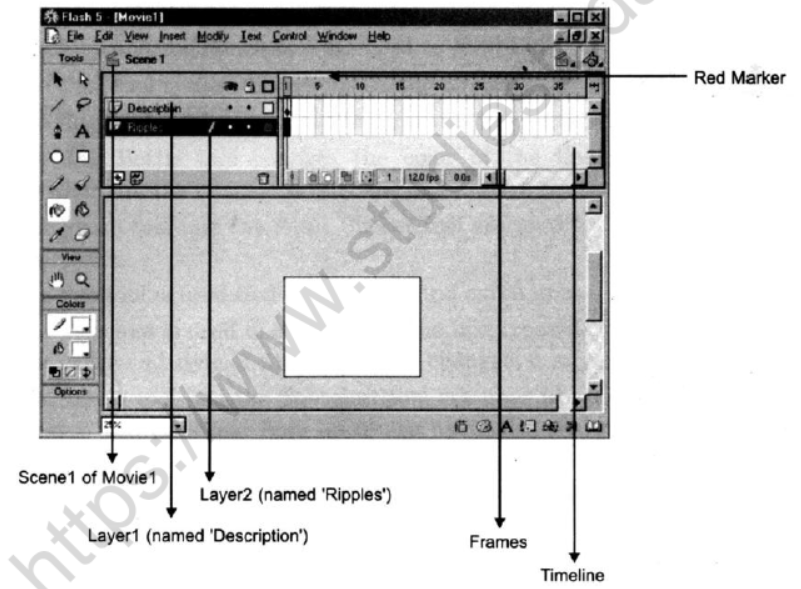 Toolbars
Toolbars are seen on the left side of the flash window, which are used to create graphics and text. If the tools are not visible, then use Window 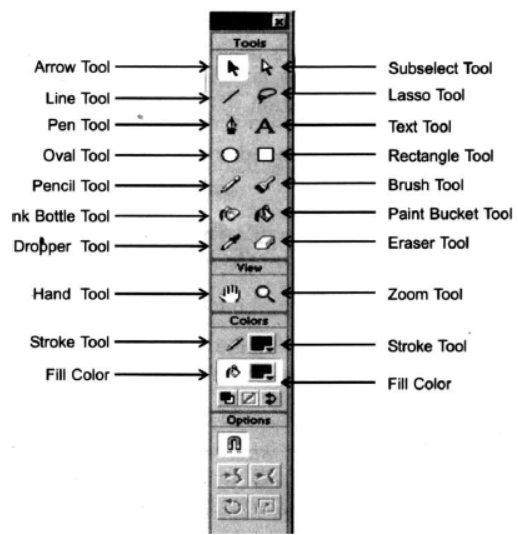 Lets see briefly, what some of the commonly used toolbars do: -
• The Line and the Pencil tool are used to draw lines.
• The Oval tool is used to draw ovals and circles.
• The Rectangle tool is used to draw squares and rectangles.
• The Ink Bottle tool changes the color of the lines, which is to be clicked anywhere on the shape and only the line portion changes.
• The Brush tool and the Paint Bucket tool are used to fill any enclosed area with some color.
• The Pen tool is used to draw straight and curve lines.
• The Text tool is used to create text. The text created can be modified, that is, the font; color and style of the text can be changed at any point of time.
• The Arrow tool and the Subselect tool are used to select an object by clicking it once. If you click and drag an image using the arrow tool, then only the filled portion of the image moves and not its border. To make the border also move (i.e. the complete image) double-click inside the image and then drag it. This tool is also used to change the shape of the image. To do so, move the cursornear the outside edge of the image and the cursor will change and then you drag it to give it an appropriate shape.

• The Dropper tool lets the user choose a color already existing on the screen and use it elsewhere. To do so, click the dropper tool, keep it on the sample image and click it. The Paint Bucket tool becomes active if the dropper tool is kept inside the image while the Ink Bottle tool becomes active it the dropper tool is, kept on the border of the image.
• The Lasso tool is used for freehand selections, so that any part of the object can be selected.
Panels
On the right hand side of the flash window appears the panels which allow the user, to change the properties of the objects. 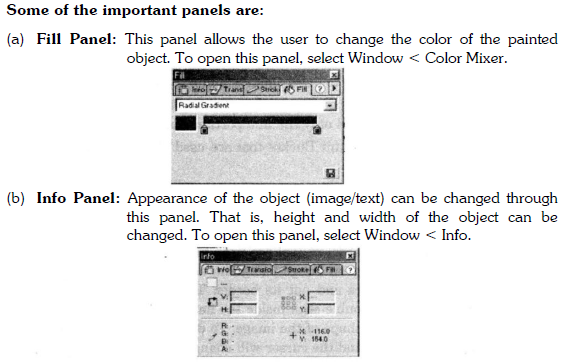