Answer the following questions, 1 to 4, choosing the correct answer.

Question 1. Bar diagram is a

Explanation: Bar diagrams are called one-dimensional because it is only the height of the the bars that matters not the width.

Question 2. Data represented through a histogram can help in finding graphically the

i. mean
ii. mode
iii. median
iv. non-of the above

Explanation: Histogram consists of a set of rectangles adjacent to each other in which each rectangle represents the class interval with the frequency.

Question 3. Ogives can be helpful in locating graphically the

(iv) all the above

Explanation: Arithmetic line graphs are also called time series graph. These graphs are used to present the information which is given over a period of time. Here time is plotted on X axis and value of variable on Y axis.

Question 5. State whether the following statements are True or False.

(i) Width of bars in a bar diagram need not to be equal.

(ii) Width of rectangles in a histogram should essentially be equal

(iii) Histogram can only be formed with continuous classification of data.

(iv) Histogram and column diagram are the same method of presentation of data.

(v) Mode of a frequency distribution can be known graphically with the help of a histogram.

(vi) Median of a frequency distribution cannot be known from the ogives.

(i) Width of bars in a bar diagram need not to be equal. – False

Reason: In bar diagrams all bars needs to be of equal width and also at equal distance from each other.

(iii) Histogram can only be formed with continuous classification of data. – True

(iv) Histogram and column diagram are the same method of presentation of data. – False

Reason: A histogram is a two dimensional diagram with set of rectangles with no spacing in between. On the other hand column (bar) diagram is a one-dimensional diagram with equal space between every Column (bar). Histogram is never drawn for a discrete variable/data whereas column diagram can be drawn for discrete variable/ data.

(v) Mode of a frequency distribution can be known graphically with the help of a histogram. – True

Reason: The highest rectangle of the histogram gives the value of mode of the frequency distribution

(vi) Median of a frequency distribution cannot be known from the ogives. - False

Reason: The intersection point of two ogive curves i.e. ‘less than’ and ‘more than’ ogive curves gives the value of median.

Question 6. What kinds of diagrams are more effective in representing the following?

(i) Monthly rainfall in a year.

(ii) Composition of the population of Delhi by religion

(iii) Components of cost in a factory

Reason: Monthly rainfall in a year is a discrete variable hence it can be best represented by a simple bar diagram with rainfall on Y-axis and months in the year on the X- axis.

Question 7. Suppose you want to emphasise the increase in the share of urban non-workers and lower level of urbanisation in India as shown in Example 4.2. How would you do it in the tabular form?

Answer: To showcase the increase in the share of urban non-workers and lower level of urbanisation in India, the data given in the example 4.2 (Case 2, page no.41) can be tabulated as follows:

From the above table we can see that out of total population of 102 crore, 74 crore people are residing in rural India and only 28 crore people are living in urban areas. This clearly indicates the low levels of urbanisation in the country.

Answer: Histogram consists of a set of rectangles adjacent to each other in which each rectangle represents the class interval with the frequency.

If the class intervals are of equal width, the area of the rectangles is proportional to their respective frequencies.

However, for some type of data, it is suitable, at times essential, to use varying width of class intervals.

For graphical illustration of such data, height for area of a rectangle is the quotient of height (i.e. frequency) and base (i.e. width of the class interval).

When intervals are equal, i.e. when all rectangles have the same base, area can easily be represented by the frequency of any interval for purposes of comparison.

But when class intervals are unequal i.e., bases vary in width, the frequencies (height of the rectangle) must be adjusted by calculating frequency density i.e. (class frequency divided by the width of the class interval) to yield comparable measurements.

(i) Present the data in tabular form.

(ii) Suppose you were to present these data in diagrammatic form which of the diagrams would you use and why?

(i) Data in the tabular form is as follows:

(ii) To present this data in diagrammatic form we will use multiple bar diagrams, because they are used for comparing two sets of data for different classes or years effectively.

(iii) Diagrammatic presentation of the data: 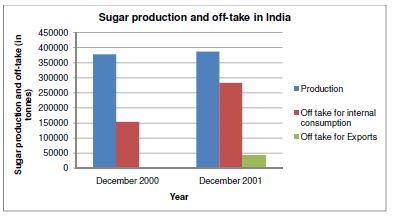 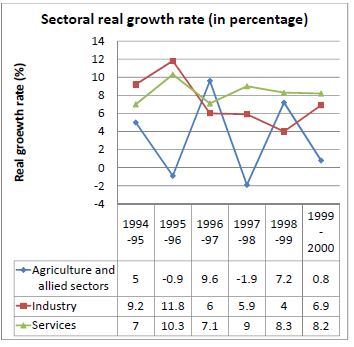