Science
Download PDF
Read and download free pdf of CBSE Class 4 Science Body Worksheet. Students and teachers of Class 4 Science can get free printable Worksheets for Class 4 Science in PDF format prepared as per the latest syllabus and examination pattern in your schools. Standard 4 students should practice questions and answers given here for Science in Grade 4 which will help them to improve your knowledge of all important chapters and its topics. Students should also download free pdf of Class 4 Science Worksheets prepared by school teachers as per the latest NCERT, CBSE, KVS books and syllabus issued this academic year and solve important problems provided here with solutions on daily basis to get more score in school exams and tests

Class 4 Science students should refer to the following printable worksheet in Pdf for Body in standard 4. This test paper with questions and answers for Grade 4 Science will be very useful for exams and help you to score good marks

THE HUMAN NERVOUS SYSTEM
The nervous system is a system that carries out a network of nerves for communication coordination among different organs of our body. It is divided into two main parts. The parts are named according to where they are located in the body. The central nervous system is in the middle of the body. It is made up of the brain and the spinal cord.
The other part is the peripheral nervous system. The word “Peripheral” means “outside” or “edge”.This system includes all the nerves that extend from the central nervous system to the edges of the body. It also includes all the nerves that lead from the outer parts of the body to the brain or spinal cord. The figure shows how these nerves extend to and from the central nervous system.Some of your nerves control the actions that you must think about in order to do something.Walking, talking, eating, and drinking are examples of such actions. They are voluntary responses controlled by messages sent from your brain to certain muscles.
Other nerves control the body’s activities that you do not have to think about. Breathing and heartbeat are examples of such activities. They are involuntary responses. Nerves carry messages to the heart and to muscles near the lungs. The messages are sent without your knowledge to think about them. 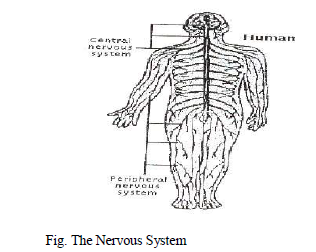 Nerve Cells and Nerves
What are the jobs of the three kinds of nerve cells? Have you ever thought about how messages travel through the nervous system? Messages move through the system along a series of nerve cells. Each nerve cell has three main parts. These are shown in the drawing. One part is called the cell body. Many short fibers can be seen extending from the sides of the cell body. These fibers pick up messages and carry them to the cell body. Also extending from one side of the cell body is a single long fiber. This long fiber axon carries messages from the cell body to another nerve cell.Nerve cells are grouped into “bundles” that form nerves. This is something like the bundles of wire in a telephone cable. Nerves carry messages from the parts of the body to the brain. They also carry messages from the brain to parts of the body. Nerves are various in their sizes. Some nerves in the fingers and toes are almost invisible. Others like those that enter the spinal cord, are almost as thick as a pencil.
There are three main kinds of nerve cells. Each kind performs different functions. The first kind of nerve cell can respond to a stimulus from outside the body or from internal parts of the body. For example, nerve cells in the skin respond to an external stimulus such as pressure, pain, heat, and cold.When you have a toothache or a stomachache, nerve cells are responding to internal stimuli. These kinds of nerve cells that respond to an internal or external stimulus’ are called sensory nerve cells.They send messages to the brain. In the drawing above the brain is receiving a message that the hand has gripped the telephone receiver.
The second kind of nerve cell carries messages away from the brain and spinal cord. These nerve cells carry messages to parts of the body, such as muscles. The messages can cause movement of the muscles. Nerve cells that carry such messages are called motor nerve cells. In the drawing, muscles in the arm have received a message to pick up the receiver.
The third kind of nerve cell connects sensory nerve cells to motor nerve cell. These cells are called association nerve cells. They are part of the central nervous system. That is, they are located in either the brain or the spinal cord. Reflex Action
Messages sometimes take shortcuts. They can by-pass the brain. For instance, you will quickly pull your hand away if you touch a hot pan. Such a reaction is called a reflex. A reflex is a rapid,unlearned response. You do not plan to make reflexes; they are automatic responses. The message travels over sensory nerve cells to your spinal cord. In the spinal cord the message passes over from connection nerve cells to motor nerve cells. You instantly remove your hand when the muscles receive messages from the motor nerve cells.
Such a response can prevent serious injury.Reflex messages allow you to respond quickly. Messages that must travel to and from the brain result in a delayed reaction. The time that it takes for you to react is called reaction time.
The Brain and Spinal Cord
What are the functions of the three main parts of the brain? There are two parts of the central nervous system. They are the brain and the spinal cord. The central nervous system receives as well as sends messages to all parts of the body.
The brain is the most important part of the nervous system. It is made up of delicate nerve tissue.The brain of an adult weights about 1.5 kg. The brain is enclosed in the skull, which helps to protect it from damage. Between the brain and the skull, there is a thick layer of liquid. This liquid,which covers the brain, acts like a shock absorber. It further protects the brain from damage that might result from a hard blow to the head.
The brain has three main parts. As you can see in the figure below, they are the brain stem, the cerebellum, and the cerebrum. The brain stem is the part of the brain that connects with the spinal cord. It controls many involuntary actions, such as breathing and heartbeat. It is also the control center for some actions that protect the body such as sneezing, coughing and blinking. 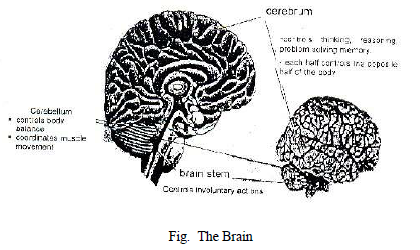 The cerebellum is found above and behind the brain stem. The main function of the cerebellum is to control body balance and the movements of muscles.
It helps the muscles work together. 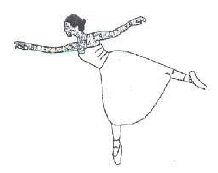 The cerebellum sends messages to the correct sets of muscles so that they work together. When you catch a ball, the muscles of your eyes, arms, and hands must work together. Your cerebellum coordinates the movements of these muscles.
The largest and most important part of the brain is the cerebrum. In fact, it makes up about 80 percent of the brain. It is divided into a right half and a left half. The right half controls the left side of the body. The left half controls the right side.
Look at the picture below. What part of the brain is the person in each picture using?

Q 1. Choose the correct option and put a tick mark against it.

1. Which of this is secreted in our mouth?

2. The doctor who looks after our teeth.

3. Nutrients get absorbed into the blood through

Q 2. Give a single word for each of the following