Question 1:  The distance between Delhi and Mumbai is usually expressed in units of
(a) decameter
(b) meter
(c) centimeter
(d) kilometer

Solution 1:  The right thing for which selection is made is (d) kilometer.

Kilometer is a measure unit that used to express the distance between Delhi and Mumbai because other units like meter, centimeter and decameter are small units and they cannot express this big distance.

Question 2:  Which of the following does not express a time interval?
(a) A day.
(b) A second.
(c) A school period.
(d) Time of the first bell in the school.

Solution 2:  The right thing for which selection is made is (d) Time of the first bell in the school.

The time of the school's first bell does not signify a time interval since it has only a single time value, and a time interval should have at least two time values. While the other sums can be split into a variety of shorter periods of time, such as a day, a second and a school period.

Question 3:  Figure shows a measuring scale which is usually supplied with a geometry box. Which of the following distance cannot be measured with this scale by using it only once?

Since the ribbon is folded five times, i.e. from the figure, 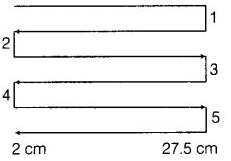 Solution 5:  The right thing for which selection is made is (c) rectilinear and periodic motion.

We can understand this using the following diagram:

Therefore, we can see that Paheli moves from A -> C and from C -> A on a straight line. So, the motion is rectilinear, since she makes 5 rounds in the same way and crosses point 6 in each round, after a normal time interval, Paheli moves in a periodic motion. So, her motion is periodic and rectilinear.

Question 6:  Bholu and Golu are playing on a ground. They start running from the same point A in the ground and reach point B at the same time by following the paths marked 1 and 2, respectively as shown in the figure. Which of the following is true for the given situation? 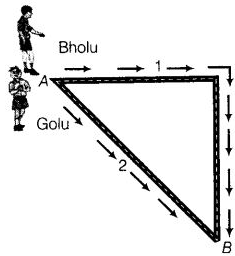 Solution 6:   The right thing for which selection is made is (b) longer distance with a higher speed.

It is obvious from the figure that, at the same time, both hit point B, so Bholu would have to travel faster to cover more distance and Golu is on the track with the shortest distance between A and B. Thus, Bholu travels at a greater velocity than Golu.

Question 7:  Four pieces of wooden sticks A, B, C and D are placed along the length of 30 cm long scale as shown in figure. Which one of them is 3.4 cm in length?

Solution 7:  The right thing for which selection is made is (c) C.

Question 8:  Which of the following figure shows the correct placement of a block along a scale for measuring its length? 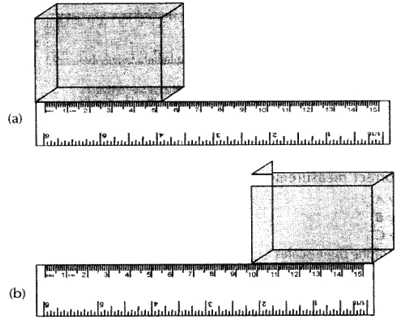 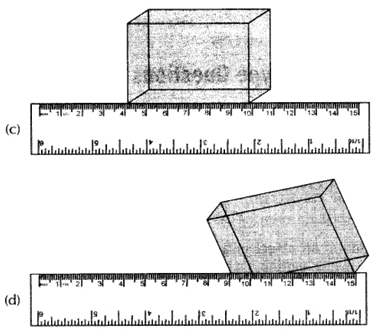 Solution 8:  The right thing for which selection is made is (c).

We can see that in above options, (a), (b) and (d) have block positioning that comes out of the 15 cm scale marking. Only (c) has the position within the scale label.

Question 9:  You are provided three scales A, B and C as shown in figure to measure a length of 10 cm. 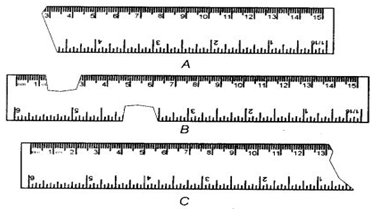 For the correct measurement of the length, you will use the scale


Solution 9:  The right thing for which selection is made is (d) any of the three scales.

We can see that on their non-broken sides, all the scales have a 10 cm length range. Thus, for Scale A, available interval length = 15-3 = 12 cm

Thus, (d) is the right choice.


Solution 10:
(a) An example of periodic motion is the motion of a swing. Since, after a periodic interval of time, it repeats its motion.

Question 12:  Give one example for each of the following type of motion.

b)      Motion of a point marked on blades of a rotating fan.

Question 13:  The photograph given in figure shows a section of a grille made up of straight and curved iron bars. How would you measure the length of the bars of this section, so that the payment could be made to the contractor? 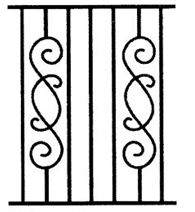 Question 14:  Identify the different types of motion in the following word diagram given as in the figure. 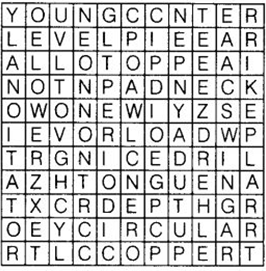 Solution 14: The different types of motion in the following word diagram are as given: 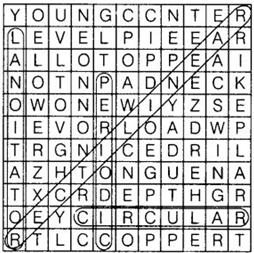 
Solution 15:  It will be most reliably calculated by Salim for the following reasons:

1. The length of 2 m that he wants to calculate can only be measured in one single attempt using this scale.

2. This scale is the default scale which will have the right calculation.

Other scales given are either non-standard or have a length smaller than the length we want to calculate.

Question 16:  Match the Column I with Column II.

Solution 16: The correct matching is as given:

(a) Rotational motion is a movement around a fixed axis in a circular path.

(b) Circular motion is the motion around a fixed point of an object or part of it.

(c) Periodic motion is a motion which, after a period of time, repeats itself.

Question 17:  While travelling in a train, it appears that the trees near the track are moving whereas co-passengers appear to be stationary. Explain the reason.


Solution 17:   Trees along the track tend to be moving back when travelling (i.e. opposite the direction of motion of a train) since there is a relative shift between the outer trees and the moving train.

Question 18:   How are the motions of a wheel of a moving bicycle and a mark on the blade of a moving electric fan different? Explain.

Solution 18:    Differences between wheel of moving bicycle and mark on the blade of electric fan are as follows:

(a) Rectilinear motion: - The bicycle handle will still travel in a rectilinear direction as it is unable to perform circular or rotatory motion.