Question 1:  Observe the pictures A and B given in figure carefully.


Solution 1:  The right thing for which selection is made is (d) In A, cars 1 and 2 will come closer to each other and in B, 3 and 4 will move away from each other.

Question 2:  The arrangement to store two magnets is shown by figures (a), (b), (c) and (d) in figure. Which one of them is the correct arrangement? 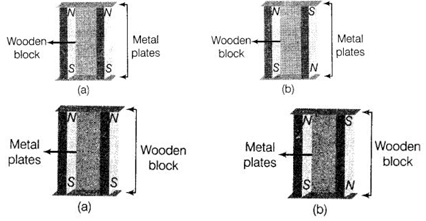 Solution 2: The right thing for which selection is made is (b).

The correct arrangement is, to store the two magnets securely, they should be held in pairs with their unlike poles on the same side. They must be divided by a piece of wood, while two metal plates should be put across their ends.

Question 3:  Three magnets A, B and C were dipped one by one in a heap of iron filings.
Figure shows the amount of the iron filings sticking to them.

Question 4:  North pole of a magnet can be identified by
(a) another magnet having its poles marked as North Pole and South pole
(b) another magnet no matter whether the poles are marked or not
(c) using an iron bar
(d) using iron filings

Solution 4:  The right thing for which selection is made is (a) another magnet having its poles marked as North Pole and South pole.

North Pole (South Pole) can be defined only if we have another magnet having its poles labeled as North Pole and South Pole because only then we can see the attraction and repulsion between N-S (i.e. opposite) poles and N-N (i.e. similar) poles, respectively.


Solution 5:  The right thing for which selection is made is (a) North pole is almost equal to the South pole.

The quantity of iron filings clinging to the North Pole is approximately equal to the South Pole since the power of the two poles is the same in a magnet.

Question 6:  Write the following statement in a correct way:

(i) When a bar magnet is broken, each of the broken part will have pole/poles.
(ii) In a bar magnet, magnetic attraction is near its ends.

i)        One of the broken components will operate as a magnet with two magnetic poles, north and south, when a bar magnet is broken.

ii)       The magnetic attraction or power of a bar magnet is maximum at the poles and minimal at the core.

Question 7:  Paheli and her friends were decorating the class bulletin board. She dropped the box of stainless steel pins by mistake. She tried to collect the pins using a magnet. She could not succeed. What could be the reason for this?


Solution 7:  Since the stainless steel pins are not made of iron, that is, they are non-magnetic, so they are not drawn to the magnet, she does not succeed.

Question 8:  How will you test that ‘tea dust’ is not adulterated with iron powder?


Solution 8:  For test this; we can do a simple experiment:

iii)     Over this dust, position the bar magnet.

iv)     If any particles are strongly attracted to this magnet by sticking to it, then iron powder would certainly be present in the tea dust.

Question 9:  Boojho dipped a bar magnet in a heap of iron filings and pulled it out. He found that iron filings got stuck to the magnet as shown in figure.

(a) Which regions of the magnet have more iron filings sticking to it?

(b) What are these regions called?

(b) These ends are called magnet poles i.e. North Pole and South Pole of magnet.

(a) The strongest magnet tends to be the iron bar (i) because of the maximum volume of iron filings sticks to it, i.e. maximum iron filings have been attracted to it.

(b) The iron bar (ii) is not a magnet since it is not drawn to any iron filings.

Question 11:  A toy car has a bar magnet laid hidden inside its body along its length. Using another magnet, how will you find out which pole of the magnet is facing the front of the car?

Solution 12:
(a) – (ii), (iii) and (iv) (A magnet can attracts magnetic materials like iron, iron filings and another magnet.)
(b) – (iii) (A magnet can be repelled by another magnet if the North Pole of a magnet is brought near the North pole of another magnet. Similarly, S-S poles of two magnets repel each other.
(c) – (i) (A magnet always stops in a particular direction (N-S), if suspended freely from a thread from its centre.)
(d) – (iii) (Poles of a magnet can be identified only if we have another magnet having its poles marked as North pole and South pole because only then we can see the attraction and repulsion between N-S poles and N-N poles, respectively.)

Question 13:  You are provided with two identical metal bars. One out of the two, is a magnet. Suggest two ways to identify the magnet.

Solution 13:  The two ways the magnet can be described are:

i)        Suspend the horizontal level of the metal bars one by one with a thread. Let a bar of metal come to rest. Now, if we move it in either direction by moving it slowly, then it will return to the same direction. This suggests it's a magnet; otherwise it's just an iron bar.

Question 14:  Three identical iron bars are kept on a table. Two out of three bars are magnets. In one of the magnets the North-South poles are marked. How will you find out which of the other two bars is a magnet? Identify the poles of this magnet.

iii)     Put one side of the iron bar to the bar magnet's south pole and notice whether it is attracted or repelled.

iv)     Take the other side of the iron bar to the south pole of the bar magnet and record the same thing again.

vi)     If, in one case, there is an attraction and, in another case, a repulsion, then it is a bar magnet.

If the bar is attracted in the case (iii), then it is the north pole of the known bar magnet. If the bar is repelled, then the detected bar magnet is clearly the South Pole.

Question 15:  Describe the steps involved in magnetizing an iron strip with the help of a magnet.


Solution 15:  The measures involved in iron strip magnetization are:

iv)     Shift it along the length of the iron strip without lifting, until you meet the other side.

v)      Raise the bar magnet and place it in the same spot after hitting the end of the iron strip, and repeat the procedure again and again.

vi)    To verify if it has become a magnet, bring some iron filings near the iron strip. If not, for some more time, follow the same operation.

Solution 16:  If we put a bar magnet next to the N magnetic compass, it will deflect the needle.

When we put a bar magnet's north pole close to the magnetic compass, it will deflect the needle away from the magnet, as shown in Fig. (i).

When we put the bar magnet's south pole near the magnetic compass, however, the needle will be deflected towards the magnet as shown in Fig. (ii).

Question 17:  Suggest an activity to prepare a magnetic compass by using an iron needle and a bar magnet.


Solution 17:   Steps in the preparation of a magnetic compass include:

iii)     Through a small piece of cork, insert the magnetized needle.

iv)     Let the cork float in a pot of water. Make sure the water does not get hit by the needle.

v)      The magnetic compass is able to work now. When the cork is floating, remember the direction in which the needle points.

vi)     Rotate the cork in various directions, with the needle fixed there in. When the cork starts to float again without spinning, note the direction in which the needle points.

When it comes to rest, you will observe that the needle shows the North-South direction.

Question 18: Boojho kept a magnet dose to an ordinary iron bar. He observed that the iron bar attracts a pin as shown in figure.

What inference could he draw from this observation? Explain.


Solution 18:  The magnetic properties are induced in it when we position some iron bar close to a bar magnet and it behaves like a magnet. It may attract small items such as sticks, iron filings. But when the bar magnet held near it is withdrawn, it becomes an iron bar again and does not attract tiny iron objects.

Question 19:  A bar magnet is cut into two pieces A and B from the middle as shown in figure.

Will the two pieces act as individual magnets? Mark the poles of these two pieces. Suggest an activity to verify your answer.


Solution 19:  Yes, because a monopole (single pole) of a magnet never exists, the two pieces will function as individual magnets.

ii)       Take the north pole of the two magnets against each other and they will be repelled.

iii)     Take the north and south poles of both magnets towards each other, they will attract.

This shows that the two parts can behave as independent magnets with properties of attraction and repulsion.

Question 20:  Suggest an arrangement to store a U-shaped magnet. How is this different from storing a pair of bar magnets?


Solution 20:  This is a suggested route, shown in the following figure: 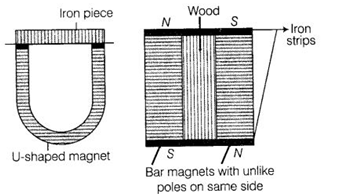 A U-shaped magnet is held between its two poles along with an iron piece, while a pair of bar magnets is kept along with iron strips and wood-separated magnets along their length, as seen in the figure above.