Question 1:  Which of the following statements is incorrect?
(a) All living things require air to breathe
(b) we can feel air but we cannot see it
(c) Moving air makes it possible to fly a kite
(d) Air is present everywhere but not in soil


Solution 1:  The right thing for which selection is made is (d) Air is present everywhere but not in soil.

Question 2:  Wind does not help in the movement of which of the following?

Solution 2:  The right thing for which selection is made is (c) Ceiling fan.

Wind does not contribute to ceiling fan movement. It rotates through Electricity.

Question 3:  What is not true about air?
(a) It makes the windmill rotate
(b) It helps in the movement of airplanes
(c) Birds can fly due to presence of air
(d) It has no role in water cycle


Solution 3:  The right thing for which selection is made is (d) It has no role in water cycle.

The presence of water vapor in the air in nature is critical for the functioning of the water cycle (This is because it is water vapor present in air which raises high in the sky along with hot air, gets cooled, condenses to form clouds and then brings rain on the earth).

Question 4:  Mountaineers carry oxygen cylinders with them because
(a) there is no oxygen on high mountains
(b) there is deficiency of oxygen on mountains at higher altitude
(c) oxygen is used for cooking
(d) oxygen keeps them warm at low temperature


Solution 4:  The right thing for which selection is made is (b) there is deficiency of oxygen on mountains at higher altitude.

The air pressure tends to decrease as we go up above sea level and the volume of oxygen also decreases at higher altitudes. That's why mountaineers bring oxygen cylinders with them.

Question 5:  Boojho took an empty plastic bottle, turned it upside down and dipped its open mouth into a bucket filled with water. He then tilted the bottle slightly and made the following observations:

iii)     Nitrogen gas came out in the form of bubbles and oxygen gas dissolved in water.

iv)     No bubbles formed, only water entered into the bottle.

Bubbles of air came out of the bottle and, as it was rotated, some water entered into the bottle.

Question 6:  Which of the following components of air is present in the largest amount in the atmosphere?

Solution 6:  The right thing for which selection is made is (a) Nitrogen.


Solution 7:  The right thing for which selection is made is (c) dust and smoke.

Airborne dust and smoke are toxic to living beings. Breathing in smoke and dust-containing air can reach our respiratory system (lungs, etc.) and damage our health.

Question 8:  Usha took a lump of dry soil in a glass and added water to it till it was completely immersed. She observed bubbles coming out. The bubbles contain

(b) only oxygen gas

(d) None of the above


Solution 8:  The right thing for which selection is made is (c) air.

(c) Bubbles contain air since some volume of air is absorbed by soil. The air in the gaps between the particles of the soil is present.

Question 9:  State whether the following statements are true or false. If false, correct them.
(a) Plants consume oxygen for respiration.
(b) Plants produce oxygen during the process of making their own food.
(c) Air helps in the movements of sailing yachts and glider but plays no role in the flight of birds and airplanes.
(d) Air does not occupy any space.

(c) False; air also leads to the flight of birds and airplanes.

(d) False; space occupies air, i.e. Air fills all the space that it has available.

Question 10:  In a number of musical instruments, air plays an important role. Can you name some such instruments?


Solution 10:   In the number of musical instruments, such as flute, trumpet, harmonium, shahnai, air plays an important role.

Question 11:  In the boxes of Column I, the letters of some words got jumbled. Arrange them in proper form in the boxes given in Column II.


Solution 12:   The correct sentences are:

(a) Oxygen and nitrogen make up 99 percent of the air together.

(b) Dissolved air for respiration is used by aquatic animals.

Question 13:  A list of words is given in a box. Use appropriate words to fill up the blanks in the following statements.
Air, oxygen, wind, water, vapor, mixture, combination, direction, road, bottles, cylinders.
(a) The ………. makes the windmill rotate.
(b) Air is a ………. of some gases.
(c) A weather cock shows the ……….. in which the air is moving at that place.
(d) Mountaineers carry oxygen ………… with them, while climbing high mountain.

Question 14:  Observe the given figure carefully and answer the following questions: 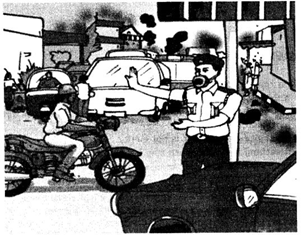 (a) What is covering the nose and mouth of the policeman?
(b) Why is he putting a cover on his nose?
(c) Can you comment on air quality of the place as shown in the figure?


Solution 14:  (a) The mask protects the policeman's nose and mouth.

(b) To save himself from dirt/polluted weather, a policeman puts a patch on his nose.

(c) The place's air quality is not pleasant. That is due to the smoke and gas produced by the engines, along with the airborne dust particles.

Question 15:  Garima observed that when she left her tightly capped bottle full of water in the open sunlight, tiny bubbles were formed all around inside the bottle. Help Garima to know why it so happened?
Solution 15:   Air is in the form of oxygen dissolved in water. Tiny bubbles were created all around inside the bottle when water bottle is left in the open sunlight because air dissolved in water begins to escape in the form of tiny bubbles due to sun heat.

Question 16:  Match the Column I with Column II.

Solution 16:  The correct matching is as follows:

(a) A firki does not rotate in a closed area.

(c) An empty glass in fact is not empty.

(d) Breathing through mouth may harm you.

(a) The firki's motion is based on the pressure/force applied by the air to the firki's blades. Because of the lack of air movement, a firki does not rotate in a closed area.

(b) The arrow of the weather cock points to a particular direction as it shows the direction in which at a particular moment the air is moving in that place.

(c) Actually, an empty glass is not empty. The air is filled with it. Everywhere, the air is present.

(d) Breathing through the mouth can harm us because we may inhale dust if present in air that can enter our respiratory system (lungs, etc.) and harm our health.

Question 18:  Write a few sentences for an imaginary situation if any of the following gases disappear from the atmosphere.

(a) The earth will have no life. For life, oxygen is vital. This assists in burning, breathing, photosynthesis, etc. The basic need of all living beings is oxygen.

(b) No burning is supported by nitrogen. Things will burn very quickly if nitrogen gas disappears from the atmosphere.

(c) The photosynthesis that occurs in green plants requires carbon dioxide. Plants will not be able to prepare their food in their absence, and therefore, without carbon dioxide, there would be no plants or animals on the ground.

Question 19:  Paheli kept some water in a beaker for heating. She observed that tiny bubbles appeared before the water started to boil. She boiled the water for about 5 min and filled it in a bottle unto the brim and kept the bottle airtight till cooled down to room temperature.
(a) Why did the tiny bubbles appear?
(b) Do you think tiny bubbles will appear on heating the water taken out from the bottle? Justify your answer.

(b) No, as no dissolved air exists in this water, tiny bubbles will not appear.

Question 20:  On a Sunday morning, Paheli’s friend visited her home. She wanted to see some flowering plants in the nearby garden. Both of them went to the garden. While returning from the garden, they also observed some flowering plants on the roadside. But to their surprise, they found that the leaves and flowers of these roadside plants were comparatively very dull. Can you help them to know why?


Solution 20:    The roadside plants' leaves and flowers are very dull because the air along the roadside is contaminated with air pollution due to vehicle and industry emissions, etc. Thus, some dust and soot was presumably accumulated on the roadside plants. This made it look boring to them.