Question 1:  Choose from the options (a), (b), (c) and (d) given below the figure which shows the correct direction of current.

Solution 1:  The right thing for which selection is made is (b).

Current always begins at the positive terminal and finishes at the battery's negative terminal. This is the traditional direction of a circuit's current flow.

Question 2:   Choose the incorrect statement.
(a) A switch is the source of electric current in a circuit.
(b) A switch helps to complete or break the circuit.
(c) A switch helps us to use electricity as per our requirement.
(d) When the switch is open, there is an air gap between its terminals.


Solution 2:  The right thing for which selection is made is (a) A switch is the source of electric current in a circuit.

In the circuit, a switch cannot be a source of electrical current. The electric cell is the source of the circuit's electricity. Other statements in options are the functions of a switch.

Question 3:  In an electric bulb, light is produced due to the glowing of:

(a) The glass case of the bulb.

(b) The thin filament.

(d) Gases inside glass case of the bulb.

Solution 3:  The right thing for which selection is made is (b) the thin filament.

Its thin filament glows in an electric bulb and gives off light and heat.

Question 4:  In the following arrangement shown in figure, the bulb will not glow if the ends A and B are connected with:

(a) a steel spoon


Solution 4:   The right thing for which selection is made is (c) a plastic clip.

Since a plastic clip is an insulator, in this case, the current will not pass through it and the bulb will not shine. A steel spoon, a metal clip and a copper wire are electricity conductors, however.

Question 5:  In the circuit shown in figure, when the switch is moved to ON position, then

(a) the bulb A will glow first

(b) the bulb B will glow first

(d) all bulbs will glow together

Solution 5:  The right thing for which selection is made is (d) all bulbs will glow together.

All the bulbs will glow together as the current will enter all the bulbs simultaneously when the switch is shifted to the place of ON.

Question 6:  Filament of a torch bulb is
(a) a metal case
(b) metal tip at the centre of the base
(c) two thick wires
(d) a thin wire

Solution 6:  The right thing for which selection is made is (d) a thin wire.

A torch bulb's filament is a thin wire that emits light. It is connected to two thicker wires that provide it with protection.

Question 7:  Paheli is running short of connecting wires. To complete an electric circuit, she may use a


Solution 7:  The right thing for which selection is made is (d) steel spoon.

Therefore, because a steel spoon is a conductor of electricity, power can flow through it. So, Paheli will complete the circuit using a steel spoon.

Question 8:  In which of the following circuits A, B and C given in figure, the cell will be used up very rapidly?

Solution 8:   In A, the cell will be used up quickly because all the current is discharged very quickly through the wire as no mechanism is linked between the cell's positive and negative terminals.

Question 9:  Figure shows a bulb with its different parts marked as 1, 2, 3, 4 and 5. Which of them label the terminals of the bulb?

Solution 9:   Following are the name of the different parts of bulb that marked in the figure:

So, labels 3 and 4 are the terminals of the bulb, as from the question.

Question 10:   You are provided with a bulb, a cell, a switch and some connecting wires. Draw a diagram to show the connections between them to make the bulb glow.


Solution 10:    The complete circuit diagram to show the connections between them to make the bulb glow is given below:

Question 11:  Will the bulb glow in the circuit shown in figure? Explain.

Solution 11:  It appears that the switch is open, as in the given circuit diagram, i.e. there is an air gap between the connecting wires, so the circuit is not complete and thus the bulb will not glow.

Question 12:  An electric bulb is connected to a cell through a switch as shown in figure. When the switch is brought in ON position, the bulb does not glow. What could be the possible reasons for it? Mention any two of them.

Solution 12:   The potential explanations that the bulb does not glow even at the turn ON location are:

iii)     It is possible that wire is break from the inside.

Question 13:  A torch requires 3 cells. Show the arrangement of the cells with a diagram inside the torch so that the bulb glows.


Solution 13:   The bulb arrangement should be such that the base of the bulb is touched by the positive terminal of the battery. The bulb will glow when switched to ON.

Question 15:  Paheli connected two bulbs to a cell as shown in figure. 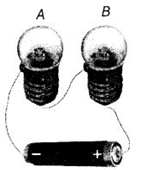 She found that filament of bulb B is broken. Will the bulb A glow in this circuit? Give reason.


Solution 15:   No, since the filament of the bulb B is broken and the current does not pass through it, the bulb A will not glow in the circuit, i.e. the circuit is broken or incomplete. Consequently, the current would not flow across the entire circuit.

Question 16:  Why do bulbs have two terminals?


Solution 16:   To connect the filament with the terminals of a cell or a battery, the bulb has two terminals to allow the current to pass through the filament.

Question 17:  Which of the following arrangement A, B, C and D given in figure should not be set up? Explain why. 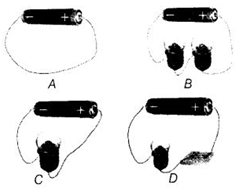 Solution 17:  Arrangement A should not be set up because the cell can be used very quickly in this arrangement, since no appliance is connected between the cell's two terminals.


Solution 18:   A fused bulb doesn't glow because the filament is broken and the circuit is incomplete in a fused bulb. The current, therefore, does not flow into it.

Question 19:   Paheli wanted to glow a torch bulb using a cell. She could not get connecting wires; instead, she got two strips of aluminum foil. Will she succeed? Explain how.


Solution 19:   Yes, she's going to excel. Because aluminum is a conductor of electricity so, aluminum foils can serve as connecting wires. It will complete the circuit and hence the bulb will glow.

Question 20:  Boojho has a cell and a single piece of connecting wire. Without cutting the wire in two, will he be able to make the bulb glow? Explain with the help of a circuit diagram.


Solution 20:   Yes, this can be done by arranging the circuit as follows:

Question 21:  Figures A and B show a bulb connected to a cell in two different ways.

(b) Yes, the bulb will glow in both cases, because we just need to complete the circuit for the bulb to glow.

(c) No, the brightness of the lamp never depends upon the direction of current passing through it.

Question 22:  Think of six activities which use electric current. Also name the devices used to perform the activity.

Solution 22:   The name of the devices and their activity are as follows:

Question 23:  A torch is not functioning, though contact points in the torch are in working condition. What can be the possible reasons for this? Mention any three.


Solution 23:   The potential explanations for the torch's failure to work are:

ii)       It is possible that the cells are discharged.

iii)     It is possible that the connected wires are broken.

iv)     It is possible that the cells are not placed in the correct order.

v)      It is possible that the switch is defective.