The world has witnessed a storm of change in the years of technology. Various subjects and mechanism concepts form up technology. And Mathematics plays an essential role in the growth of technology and science. The term Mathematics is outlined as the methodological implementation of matter. The various parts of mathematics assist us in making our lives systematic. Mathematics is not only vital in the field of science but is also crucial in computer science fields.

The great Aryabhata in ancient age discovered the technique of numerals in the Hindu-Arabic Number system. Therefore, he is popularly known as the father of the Number System. This article will explore the possibilities of the Number System and try to develop a deep understanding of the topic.

Definition of Number System in Mathematics

The Number System can be highlighted as a writing system or a mathematical notation to express some numbers of a given set, in accordance with the Indian system of numeration. In different Number Systems, the identical system of numbers may define other numbers. For instance, 11, in the decimal system, represents a number, while in the binary system, it presents number three, and in the unary numeral system, it represents number two.

The properties of a Number System –

The Number System is currently based on the place-value systems, i.e., it depends upon positional characteristics. Therefore the value of the numbers is depicted by their position of the numbers in the respective representation. Let's make it clear with an example; the 4 in 40 and 4 in 400 represent 4 ten's and four hundred, respectively. This system appears in contrast to the ancient Number System in Egyptian civilization, Greek or Hebrew Number System, which were not position-based, making them more diplomatic to understand.

The field of computers and computer science implements two main number of systems. Specifically, the Binary Number System, which represents the numbers in the form of 0's and 1's, and the Hexadecimal Number System, which includes the use of 16 symbols – 0,1,2,3,4,5,6,7,8,9, A, B, C, D, E, F. The roman numbers one to hundred and so on are also a part of number systems. Therefore, we can use 1 to 100 roman numerals and more in the number system.

Decimal Number System (Base 10) – also known as the denary or decanary number system. It is one of the standard ways to represent integers and non-integers in a specific sequence. In the Decimal Number System, denoting the numbers is also referred to as decimal notation.

Binary Number System (Base 2) – also known as the base-2 number system. This number system typically uses two types of symbols to denote specific numbers i.e., 0's and 1's. The binary number system refers to the positional notion with a radix of 2. Every digit in this system is highlighted as a bit.

Octal Number System (Base 8) – also known as the base-8 number system. It implements numbers from 0 to 7.We can quickly form Octal numerals by grouping binary numerals into three (beginning from the right).

Hexadecimal Number System (Base 16) – also known as the base-16 number system. It is a positional number system arranging the numbers applying the base or radix of 16. The Hexadecimal usually uses 16 digits to represent the numbers, ranging from 0 to 9 and from A to F.

The Decimal Number System is also quoted as the denary number system. It is one of the standard mechanisms of representing the integers and non-integers. It's a Hindu-Arabic Number System, in which the way of expressing the numbers is popularly known as decimal notation. It is generally highlighted as a denotation of numbers in the decimal numeral system.

Each position of the numbers presents a specific power to the base of 10. For instance, the decimal number 5687 includes seven at the unit's place, eight at the ten's place, six at the hundred's place, and five at the thousand's place. The value of the whole number is as follows –

The infinite decimal concept is also introduced in the number system, which defines a decimal value repeating infinite times.

The modern Binary number system mechanism was developed in the 16th and 17th centuries by efficient scientists. However, the idea was inspired by the system of binary numbers highlighted earlier in the ancient era of Egypt, India, and China. In mathematics and electronics, a binary number can be portrayed as a number represented in the base-2 number system.

A number in Binary Number System can be converted into any other Number System according to the users' requirements. The binary number system is one of the most intensely used number systems across different computer-based devices today.

The octal number system implements digits from 0 to 7, and therefore is a base-8 number system. We can create octal numbers from binary numerals by arranging consecutive binary digits in a group of three digits. For instance, we can represent a decimal 74 in binary format as 1001010.

Octal numbers possess immense importance in computer applications. The octal number is one of the most used number systems in today's modern world of technology and computers. We can easily convert octal number to decimal number. 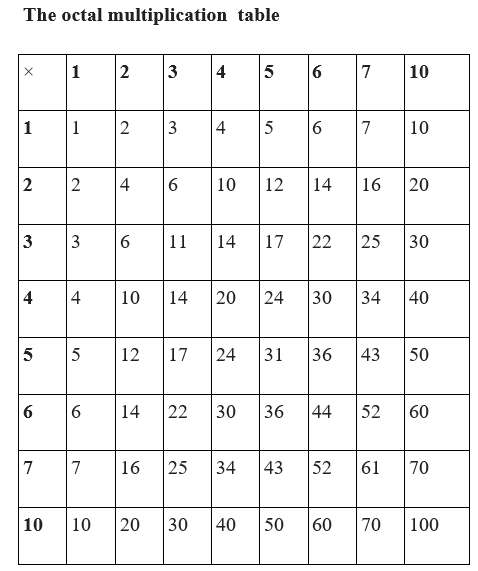 The Hexadecimal Number System or the Hex Number System is a positional number with a radix of 16. It is one of the most used number systems for long binary values. It presents a conveniently compact and easily understandable format compared to the long binary strings with 0's and 1's.

Although binary strings can be diplomatic and long, we can make it easier by dismantling these long binary numbers into smaller groups to make it convenient to understand and implement. For instance, the group of binary digits 1101, 0101, 1100, and 11112 are much suitable to comprehend compared to 11010101110011112 when they are all grouped.

Hexadecimal is one of the more fantastic sides of complexity while working with computers and memory address locations compared to binary or decimal number systems.

The numbers ranging from 0 to 10 are the inhabitants of the original decimal system. But we need the hexadecimal number system to represent the number from 10 to 15, using the capital alphabet from A to F.

Binary Number System (Base 2) – also quoted as the base-2 number system. This number system typically uses two types of symbols to denote specific numbers i.e., 0's and 1's. The binary number system highlights the positional notion with a radix or base of 2.

He uses numbers from 0 to 7. The octal number system defines the positional notation of the number implementing the base or radix of 8.

Hexadecimal Number System (Base 16) – also called the base-16 number system. It is a positional notation of numbers applying the base or radix of 16. The Hexadecimal generally implements 16 digits representing the numbers, ranging from 0 to 9 and from A to F.

Thus, the Number System Chart plays a significant role in portraying the base of all the actual number of systems.

The Number Systems includes different methods that allow the conversion of one number system into another.

The conversion of Binary into Octal involves two steps –

First, we must make a pair including three bits on both sides of the binary points. If we find one or two bits are left in a three-bit pair, the required number of zeros can be added to the extreme corners.

Next, we must collect and write all octal digits.

The conversion of binary to Hexadecimal involves two steps, which are as follows:

We can convert decimal to binary, following two steps, which are as follows:

The procedure to convert octal into decimal is mostly the same as binary conversion into decimal. The only point of difference is that you must perform the division and multiplication operation with the quotient with base 8.

The procedure to convert octal into decimal is mostly the same as binary conversion into decimal. The only point of difference is that you must perform the division and multiplication operation with the quotient with base 16.

You can also convert Octal to Hexadecimal by the following methods –

The Number System is not only the king of mathematics, but it also plays a crucial role in the field of computers. The computer, although being a brilliant machine, can't understand the human language. Therefore, whenever we enter something in the computer, it first translates it into a number for the sake of understanding. The computer is only familiar with the positional number system, including only a few symbols quoted as digits. These symbols depict different values according to the positions it occupies in the computer memory. Therefore, we can determine the value or position of each digit in a number using the following ways –

Ans - The Number System can be outlined as a writing mechanism or a mathematical notation to portray some numbers of a given set in an efficient matter. In various Number Systems, an identical system of numbers may define different numbers. For instance, 11, in the decimal system, represents a number, while in the binary system, it presents number three, and in the unary numeral system, it represents number two.

Q2: Why is the Number System essential?

Q3: What is the Base number, and what is base number 1, Number System Called?

Number System with base 1, can be quoted as Unary System, the simplest and the most convenient number system to denote natural numbers. In a unary number system, we indicate zero by an empty string, with a symbol's absence. For example, the numbers of 2, 4, 5 will be represented in the unary number system as 11,1111,11111.

Q4: What is a Binary Number System? Why is it important?

Now, convert decimal to binary to obtain the results.

Q6: What is the International Number System?

Q7: How to convert Hexadecimal to Decimal?

Q8: How to solve the Number System problems efficiently?