Thinking about the Text

I. Discuss in pairs and answer each question below in a short paragraph (30 − 40 words).
1. How many characters are there in the narrative? Name them. (Don’t forget the dog!).

2. Why did the narrator (Jerome) volunteer to do the packing?

3. How did George and Harris react to this? Did Jerome like their reaction?

4. What was Jerome’s real intention when he offered to pack?

5. What did Harris say after the bag was shut and strapped? Why do you think he waited till then to ask?

6. What “horrible idea” occurred to Jerome a little later?

7. Where did Jerome finally find the toothbrush?

8. Why did Jerome have to reopen the packed bag?

9. What did George and Harris offer to pack and why?

10. While packing the hamper, George and Harris do a number of foolish and funny things. Tick the statements that are true.
(i) They started with breaking a cup.
(ii) They also broke a plate.
(iii) They squashed a tomato.
(iv) They trod on the butter.
(v) They stepped on a banana.
(vi) They put things behind them, and couldn’t find them.
(vii) They stepped on things.
(viii) They packed the pictures at the bottom and put heavy things on top.
(ix) They upset almost everything.
(x) They were very good at packing.

1. There are four characters in the narrative. They are Jerome (the narrator), George, Harris and Montmorency (the dog).
2.  The narrator volunteered to do packing because he thought he was the best packer. He felt proud of his packing and wanted to show it.
3. George and Harris readily accepted Jerome’s suggestion. George smoked a pipe and “spread himself over the easy-chair”, while Harris put his legs on the table and lit a cigar.

No, Jerome irritated by their reaction.

4. When Jerome offered to pack, his real intention was to supervise the work. He wanted to show his ability through the supervision.

5. After the bag was shut and strapped, Harris mentioned that Jerome had not packed the boots.
He had waited till then to ask because he wanted to make Jerome realise his mistake and ridicule his packing skills.

7. Jerome finally found the tooth brush inside a boot when he was putting the things back one by one after turning them out of the bag.

9. George and Harris offered to pack the hampers because It was getting late and they thought that Jerome had taken too much of time. They also wanted to show their skill to Jerome.


II. What does Jerome say was Montmorency’s ambition in life? What do you think of Montmorency and why?

Jerome says Montmorency’s ambition in life was to get in the way and he sworn at. Montmorency was a mischievous little dog who loved creating troubles for others. I think that Montmorency was a perfect nuisance because whenever he found people busy with their work, he might feel bored and wanted to get involved. He meant no trouble intentionally. But when people shouted at him or threw things at his head, he got discouraged and then went away to sit silently, which the narrator calls as the fulfillment of his conceit.

III. Discuss in groups and answer the following questions in two or three paragraphs (100 −150 words)

1. Of the three, Jerome, George and Harris, who do you think is the best or worst packer? Support your answer with details from the text.

2. How did Montmorency ‘contribute’ to the packing?

3. Do you find this story funny? What are the humorous elements in it?
(Pick out at least three, think about what happens, as well as how it is described.)

1. Of the three, Jerome is the best packer He knew how to arrange things in order. Both Harris and George messed everything. Harris packed the strawberry jam on top of a tomato and squashed it. George stepped on the butter. They were getting constantly irritated by Montmorency. Till the time Jerome packed, although he took his time, the job. They even kept things behind them and then kept searching for it. They made everything such a mess.

2. The packing escapade was already a messy job and Montmorency's contribution made it even more tiresome. He did his level best to be a “perfect nuisance”.
He came and sat down on things, just when they were wanted to be packed. He put his leg into the jam and worried the teaspoons. He also pretended that the lemons were rats. So he got into the hamper and killed three of them before Harris could land him with the frying-pan.

3. Yes, this story is definitely funny. Not only is the way in which the three friends pack for their trip quite mirthful, but the way the author narrates all the incidents is also entertaining.
The first humorous element is that he offered to pack, George and Harris leaves the whole matter to him. Consequently, he has to do packing though his real intention was to boss the job.
The second humorous element is that George placed the butter on the chair and Harris sat on it and it stuck at his back. When they searched it for packing it was missing. They walk and walk round the room. At last, George saw it at Harris’s back.
The third humorous element is that Montmorency squirms in where he is not wanted. He wants somebody stumble over him and curse him steadily for an hour. He pretends that lemons were rats.

I. Match the words/phrases in Column A with their meanings in Column B. 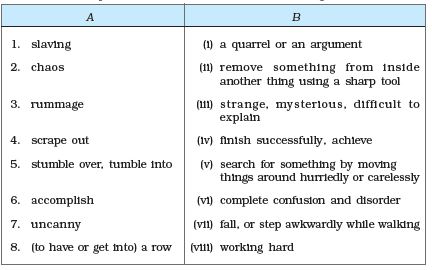 II. Use suitable words or phrases from Column A above to complete the paragraph given below.

During power cuts, when traffic lights go off, there is utter chaos at crossroads. Drivers add to the confusion by getting into a row over their right of way, and nearly come to blows. Sometimes passers-by, seeing a few policemen slaving at regulating traffic, step in to help. This gives them a feeling of having accomplished something.

III. Look at the sentences below. Notice that the verbs (italicised) are all in their bare form.

2. The table below has some proverbs telling you what to do and what not to do. Fill in the blanks and add a few more such proverbs to the table.

(iii) Look Before you leap.
Don't make a mountain out of a mole hill.

(iv) Live and let Live.
Don't put all your eggs in one basket.

(v) Mind your own business.
Never put off till tomorrow what you can do today.

(vi) Be first at the feast and last at the fight.
Don't count the days, make the days count!

Download Class 9 English assignments. Practice tests for Class 9 for English has been made for all important topics in NCERT book and is available for free...
More..

Download Class 9 English assignments. Practice tests for Class 9 for English has been made for all important topics in NCERT book and is available for free...
More..

CBSE Board Results for Class 10 and Class 12

Anticipated CBSE result 2020 Date and Time: This is all you wish to know! Here is the news which all students are waiting for. The expected date and time for the CBSE Class X and XII Results 2020 can be viewed here by the students. CBSE Result 2020: The Central Board...

The Central Board of Secondary Education (CBSE) on Wednesday postponed the board examination of standard XII scheduled for Thursday, that is, on the 27th February 2020 for the areas of north - east Delhi affected by communal riots. The rescheduled date for the exam is...

Delhi Government orders closure of all Primary Schools till 31stMarch due to the CORONAVIRUS A much needed announcement by the Government of Delhi. On Thursday, the Delhi Government instructed all the schools of the state to close operations for the students of Pre-...