1. Which of the following cannot be charged easily by friction?

(a) A plastic scale

Answer: The correct option is (b).

2. When a glass rod is rubbed with a piece of silk cloth the rod

Answer: The correct option is (b).

3. Write T against true and F against false in the following statements.

(a) Like charges attract each other. (T/F)
(b) A charged glass rod attracts a charged plastic straw. (T/F)
(c)  Lightning conductor cannot protect a building from lightning. (T/F)
(d) Earthquakes can be  predicted in advance. (T/F)

Explanation: The lightning conductor transfers all the atmospheric charge to the Earth. Hence, lightning does not affect the building.

Explanation: There is no instrument in the world which  can predict the earthquake in advance.

4. Sometimes, a crackling sound is heard while taking off a sweater during winters. Explain.

Answer: The sweater gets charged when  it is taken off. It is because  of the friction between the sweater and the body. Thus, crackling sound is produced during this process.

5. Explain why a charged body loses its charge if we touch it with our hand.

Answer: When  a person touches a charged object, its charge is conducted by his body  to the earth. Hence, the charged body  loses its charge.

6. Name the scale on which the destructive energy of an earthquake is measure An earthquake measures 3 on this scale. Would it be recorded by a seismograph? Is it likely to cause much damage?

7. Suggest three measures to protect ourselves from lightning.

(ii) If you are driving car, then remain there until the lightning is over. Close the windows of the car immediately.

(iii) During lighting, do not take bath in running water.

9. Describe with the help of a diagram an instrument which can be used to detect a charged body. 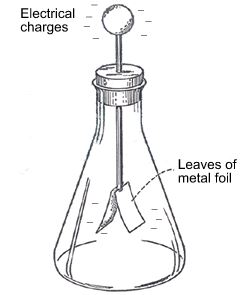 It consists of a metal rod. At one end of the rod, two leaves  of aluminium foil  are fixed  and at the other end, there is a metal disc. The leaves  of aluminium foil  are placed  inside  a conical  flask and the flask  is corked to isolate the leaves  from air. When  the metal disc is touched with a charged body, the aluminium strips move  away from each other. This happens because  some  of the charges of the body  are transferred to the strips through the metal rod. This method of charging a body  is called  charging by conduction. The nature of charges on both the leaves  and the charged body  are the similar. Hence, both the leaves  of the aluminium foil  will move  away  from each other. If the body  was not charged, then the leaves  of the foil  would remain as they were before. They would  not repel each other.

10. List three states in India where earthquakes are more likely to strike.

Answer: Jammu  and Kashmir, Gujarat and Assam  are three major states of India where earthquakes are more likely to strike.

11. Suppose you are outside your home and an earthquake strikes. What precaution would you take to protect yourself?

(i) If you are travelling in a bus or a car, then do not come  out when  an earthquake strikes.

(ii) Rush to find  an open  field  away  from tall buildings, installations, tall trees, and electric wires and poles  during an earthquake.

12. The weather department has predicted that a thunderstorm is likely to occur on a certain day. Suppose you have to go out on that day. Would you carry an umbrella? Explain.

Seven Motivational tips for every student

If you’re are a student or a learner and you doesn’t feel like study then this article is going to be very important for you, Reading constantly and Staying motivated as a student is one of the most challenging tasks and barriers to educational success. Education is...