Question-1 What is the term used for secretions of endocrine glands responsible for changes taking place in the body?

Answer: The term used for secretions of endocrine glands responsible for changes taking place in the body is hormones. Hormones are the chemical substances that are directly released into blood steam by the endocrine glands.

Answer: Adolescence is the period in human life cycle that occurs after childhood and before adulthood, between the age 10 and 19. Adolescence is defined as the period of life when the body undergoes changes, leading to reproductive maturity

Question-3 What is menstruation? Explain.

Answer: Menstruation is the periodic discharge of thickened lining of uterus along with blood through vagina. It begins during puberty. Every month, female’s body releases an ovum and prepares itself for pregnancy by thickening the uterine walls. If pregnancy does not occur, then the thickened lining of uterus is discharged with blood. This discharge of blood is called menstruation.

Question-4 List changes in the body that take place at puberty.

Certain changes take place in the body of boys are:

1. Sudden increase in height, during the age 13-14 and slows down around 18.
2. Voice changes as the larynx begins to grow. The growing larynx can be seen as Adam’s apple.
3. Change in body shape like broadening of shoulders, muscular growth also takes place.
4. Organs like testicles and penis starts growing in size and attains their full size by the age 17-18.
5. Growth of pubic hair, as well as facial hair, leg chest and armpit hair starts growing in boys during puberty.
6. Sweatglands and sebaceous glands become more active and result into pimples and acne.

Changes that take place in the body of girls:
1. Sudden increase in height, during the age of 11 and slows down around 16.
2. A drastic change in the shape of body takes place due to the growth of breasts and widening of the region below the waist.
3. Organs like ovaries and uterus starts growing in size. Ovaries start releasing mature eggs.
4. Pubic hair growth, as well as armpit and leg hair starts growing in girls during puberty.
5. Sweat glands and sebaceous glands become more active and result into pimples and acne.
6. Onset of menstruation also takes place during puberty.

Question-5 Prepare a table having two columns depicting names of endocrine glands and hormones secreted by them.

Question-6 What are sex hormones? Why are they named so? State their function.

Testosterone: It is responsible for the development of secondary sexual characters in males such as growth of facial hair, and body hair, deepening of voice, broadening of shoulder, growth and development of reproductive organs, production of sperms, etc.

Oestrogen: It is responsible for the development of secondary sexual characters in females such as, breast enlargement, widening of region below waist, growth and development of reproductive organs, production of ova, etc.

a) Adolescents should be careful about what they eat, because
i. proper diet develops their brains.
ii. proper diet is needed for the rapid growth taking place in their body.
iii. adolescents feel hungry all the time. iv. taste-buds are well developed in teenagers.

a) ii. proper diet is needed for the rapid growth taking place in their body.
b) i. menstruation starts.
c) ii. chapati, dal and vegetables.

a) Adam’s apple: In boys, during puberty, the voice box grows in si This growing voice box can be seen as a protruding part of the throat called Adam’s apple. Due to this boys have a deep voice.

Question-9 Word game; use the clues to work out the words.

Question-10 The table below shows the data on likely heights of boys and girls as they grow in age. Draw graphs showing height and age for both boys and girls on the same graph paper. What conclusions can be drawn from these graphs? 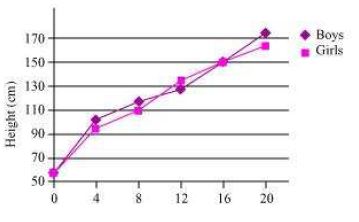 Following observations can be drawn from the graphs: