Question.1 Fill in the blanks:

a) A place where animals are protected in their natural habitat is called _____.
b) Species found only in a particular area is known as ______
c) Migratory birds fly to far away places because of ______ changes.

a) A place where animals are protected in their natural habitat is called wildlife sanctuaries.
b) Species found only in a particular area is known as endemic.
c) Migratory birds fly to far away places because of climatic changes.

Question.2 Differentiate between the following:

Question. 3 Discuss the effects of deforestation on the following:
a) Wild animals
b) Environment
c) Villages
d) Cities
e) Earth
f) The next generation

c) Villages: Deforestation may result in less rain fall or heavy rains. Less rain fall will lead water scarcity in villages that will decrease the agricultural production. Hence, domestic cattle will have no fodder. Heavy rains will cause floods. Soil erosion caused by deforestation and floods will further adversely affect the agriculture which will lead to migration of village people to cities for their livelihood.

d)Cities: As in the case of villages, deforestation in cities can increase the risk of floods and draughts in that area. In addition to that, vehicular and industrial pollution, increase in the level of carbon dioxide in the atmosphere, lead to global warming.

e) Earth: Deforestation increases desertification, droughts, floods, etc. Due to deforestation there will an increases in the temperature of the earth i.e., global warming due to the increased level of carbon dioxide on the earth. As a result, the entire natural water cycle will get disrupted and will increase the threat of natural calamities.

f) The next generation: Deforestation is responsible for global warming, soil erosion, greenhouse effect, drought floods and many other global problems. Due to this, our next generation will have to face severe consequences.


Question. 4 What will happen if:
a) We go on cutting trees
b) The habitat of an animal is disturbed
c) The top layer of soil is exposed

a) Continuous cutting of trees will completely destroy habitat of many organisms. Cutting of trees will lead to global warming. Global warming will disturb the natural water cycle. As a result, rainfall pattern will be changed with will further lead to floods or drought This will also increase the risk of soil erosion, desertification and natural calamities.

b)The habitat is a place where an organism gets food, shelter and protection. If the habitat of an animal is disturbed then the animal will be forced to move to other places in search of food and shelter. In this process, the animal might get killed by other animals or unfavourable environmental conditions.

c) If the top layer of the soil is exposed, then it will gradually erode exposing the lower layer of soil, which is less fertile as it contains less humus. Continued soil erosion will make the land barren or infertile.

a) Why should new conserve biodiversity?
b) Protected forests are also not completely safe for wild animals. Why?
c) Some tribals depend on the jungles. How?
d) What are the causes and consequences of deforestation?
e) What is Red Data Book?
f) What do you understand by term migration?

Answer:
a) Biodiversity should be conserved to maintain a balance in nature as each component of biodiversity is dependent on each other for their sustainability.

b)Protected forests are also not completely safe for wild animals because people living in villages adjacent to the forest use forest resources and kill animals for their flesh, skin, etc.

c) Tribals are the people that live in forests and are away from the modern life amenities. For their survival, forest is the only source that provides them food items like, grains, fruits, and other products like meat, honey, fodder for their cattle, wood fuel etc.

d)Causes of deforestation - To meet the demands of increasing human population, urbanisation and industrialisation Consequences of deforestation: Deforestation will lead to global warming, environmental imbalances like disturbed water cycle. e) Red data Book is the source book which maintains a record of all the endangered animals and plants.

f) Migration is the phenomenon of movement of a species from its habitat to other habitat for a particular time period in a year for a specific purpose like breeding.

Question.6 In order to meet the ever-increasing the ever- ending demand in factories and for shelter, trees are being continually cut. Is it justified to cut trees for such projects? Discuss and prepare a brief report.

Answer: No, it is not at all justified to cut trees to meet the ever increasing demands of human population. Forests are the habitats of several organisms including wild animals. They help in maintaining a balance between oxygen and carbon dioxide in nature and hence, keep a check on the temperature of the earth. In the process, they prevent the excessive heating of the atmosphere. They prevent soil erosion to a large extent and natural calamities such as floods and droughts. They increase the fertility of the soil and help in conserving biodiversity.  The cutting of forests to large extent will cause global warming, soil erosion, greenhouse effect, droughts, floods, and many more problems. Hence, forests must be conserved to maintain a balance in nature.

Question.7 How can you contribute to the maintenance of green wealth of our locality? Make a list of actions taken by you.

Answer: My contribution in the maintenance of green wealth of my locality will be:

1. By taking care of the plants and trees growing in or around my locality
2. By planting more and more trees
3. By encouraging people of my locality to plant more trees
4. By informing people about the importance of growing trees
5. By educating people and young children about the effects that deforestation on our environment and on our planet

Answer: Deforestation causes an increase in the level of carbon dioxide. The high levels of carbon dioxide in the atmosphere will trap more heat radiations, causing global warming. Due to an increase in the temperature of the earth, water cycle will get disturbed. As a result of this, the rainfall pattern will be changed. The reduced amount of rain will then cause droughts.

Question.9 Find out about national parks in your state. Identify and show their location on the outline map of India. 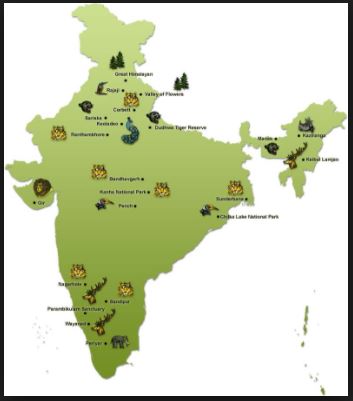 Question.10 Why should paper be saved? Prepare a list of ways by which you can save paper.

Answer: Paper should be saved because it takes around seventeen full grown trees to make 100kg of paper. Trees help in maintaining a balance of nature. Therefore saving paper is a way to save trees and prevent the impact of their loss on living organisms.

Ways by which paper can be saved

1. Recycling of used paper.
2. Writing on both the sides of a paper
3. Educating people about the importance of paper.
4. Using of information technology to save printed data in digital form. 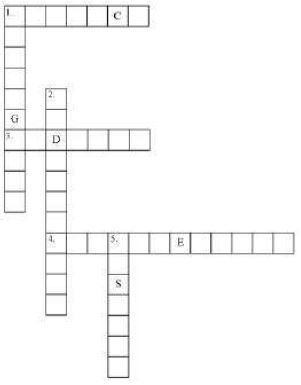 1. Species on the verge of extinction.
2. A book carrying information about endangered species.
5. Consequence of deforestation.

Across
1. Species which have vanished.
3. Species found only in a particular habitat. 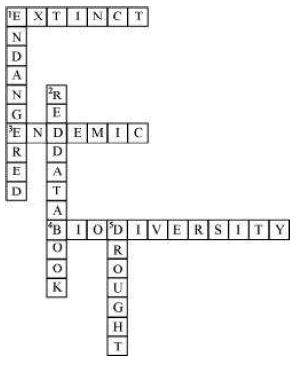