Question - 1 - List conditions under which combustion can take place.

Necessary conditions for combustion are:

(1) Fuel: Fuel is the raw material for combustion.

(2) Air: Combustion takes place only in the presence of air or oxygen.

Fill in the blanks.

(a) Burning of wood and coal causes pollution of air.
(b) A liquid fuel, used in homes is LPG.
(c) Fuel must be heated to its ignition temperature before it starts burning.
(d) Fire produced by oil cannot be controlled by water.

Explain how the use of CNG in automobiles has reduced pollution in our cities.

Combustion of fuels like petrol and diesel produces un- burnt particles along with carbon monoxide gas. These pollutants cause many respiratory problems. Oxides of sulphur and nitrogen are also released due to combustion of petrol and diesel. Oxides of sulphur and nitrogen cause acid rain. CNG produces the harmful products in very small amount. CNG is a cleaner fuel.

Compare LPG and wood as fuels.

Comparison of LPG and wood as fuels

(a) Water is not used to control fires involving electrical equipment.

(b) LPG is a better domestic fuel than wood.

(c) Paper by itself catches fire easily whereas a piece of paper wrapped around an aluminium pipe does not.

(a) Water cannot be used to put off fire caused by the electrical equipments because it may conduct electricity and harm those trying to douse the fire.

(b) Burning of wood produces a lot of smoke and un- burnt particles which cause respiratory problems. LPG does not produce smoke and its calorific value is much higher as compared to wood. Therefore, LPG is a better domestic fuel than wood.

Make a labelled diagram of a candle flame. 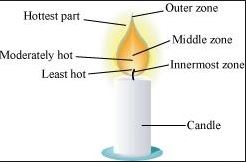 Question - 7 Name the unit in which the calorific value of a fuel is expressed.

Calorific value of a fuel is expressed in Kilo Joule per kg (kJ/kg).

Question - 8 - Explain how CO2 is able to control fires.

Question - 9 - It is difficult to burn a heap of green leaves but dry leaves catch fire easily. Explain.

Question - 10 - Which zone of a flame does a goldsmith use for melting gold and silver and why?

Question - 11 - In an experiment 4.5 kg of a fuel was completely burnt. The heat produced was measured to be 180,000 kJ. Calculate the calorific value of the flame.

Calorific value of the fuel is the amount of heat energy produced on complete combustion of 1 kg of fuel.

Question - 12 - Can the process of rusting be called combustion? Discuss.

Combustion is the chemical process in which a substance reacts with oxygen and gives out energy in the form of either heat or light or both. It is a very fast process. On the other hand, rusting is a slow process which involves the conversion of iron into rust in presence of air (oxygen) and water. In both the processes, oxygen is common reactant.