Question - 1 - What are advantages of using CNG and LPG as fuels?

The advantages of using CNG and LPG as fuels are as follows:

(1) They can be easily transport through pipe lines.
(2) They can be used directly for burning in homes and factories.
(3) Both are clean fuels.
(4) Both CNG and LPG are used as fuel by vehicles because they are less polluting.

Question - 2 - Name the petroleum product used for surfacing of roads.

Answer. Bitumen is used for surfacing of roads.

Question - 3 Describe how coal is formed from dead vegetation. What is the process called?

(a) About 300 million years ago the earth had dense forest in low lying wetlands. Due to natural processes like flooding and earthquakes, forests got buried under the soil. With the passage of time, as more and more soil got deposited on them, the buried plants were compressed. Deep down the earth, pressure and temperature was very high. Under high pressure and temperature, slowly plants got converted into coal.

(b) The slow process of conversion of dead vegetation into coal is called carbonization.

Question - 4 Fill in the blanks.

(b) Process of separation of different constituents from petroleum is called ______.

(a) Fossil fuels are coal, petroleum and natural gas.

(b) Process of separation of different constituents from petroleum is called refining.

(a) Fossil fuels can be made in the laboratory. (T/F)

(b) CNG is more polluting fuel than petrol. (T/F)

The amount of fossil fuels available in nature is limited. The formation of fossil fuels takes millions of years by the action of heat and pressure on the remains of dead vegetation and animals. The rate at which we are using them is very fast as compared to their rate of formation. Therefore, fossil fuels are exhaustible natural resources.

Coke is a black porous substance. It is obtained as residue during destructive distillation of coal. The characteristics of coke are as follows:

(1) Coke is an almost pure form of carbon.
(2) It burns almost with no smoke.
(3) It is a non-conductor of heat and electricity.

Uses of coke are as follows:

(1) Coke is used in the extraction of metals.

(2) It is also used in the manufacturing of steel.

Question - 8 - Explain the process of formation of petroleum.

Question - 9 - The following table shows the total power shortage in India from 1991-1997. Show the data in the form of a graph. Plot shortage percentage for the years on the Y-axis and the year on the X-axis. 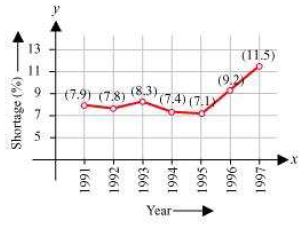