Question-1 Indicate whether the following statements are true (T) or false (F).

a) Unicellular organisms have one-celled body. (T/F)
b) Musclecells are branched. (T/F)
c) The basic living unit of an organism is an organ. (T/F)
d) Amoeba has irregular shape. (T/F)

a) Unicellular organisms have one-celled body. (T)
b) Muscle cells are branched.(F)
c) The basic living unit of an organism is an orga (F)
d) Amoeba has irregular shape. (T) 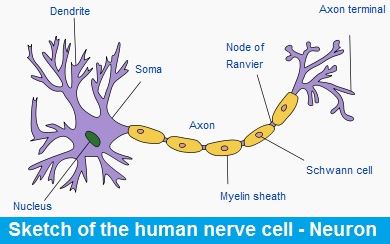 The nerve cell receives and transfers messages to control and coordinate the working of different parts of the body.

a) Cytoplasm
b) Nucleus of a cell

a) Cytoplasm - In a cell, a jelly-like substance present between the nucleus and the cell membrane is called cytoplasm. It contains various cell organelles such as mitochondria, golgi apparatus, endoplasmic reticulum, lysosomes, etc. It helps in the exchange of material between the cell organelles.

b) Nucleus of a cell - Nucleus is generally spherical in shape and located centrally in a cell. A porous membrane called nuclear membrane separates the nucleus from the cytoplasm. Nuclear membrane allows the exchange of materials between the nucleus and the cytoplasm. Nucleus contains a smaller spherical body called nucleolus and thread-like structures called chromosomes. Chromosomes carry genes and help in the transfer of characters from one generation to the next generation. In addition to the function of inheritance of characters, nucleus regulates all the activities of a cell.

Question-5 Make sketches of animal and plant cells. Statethree differences between them.
Answer:

The spetch is as follows- 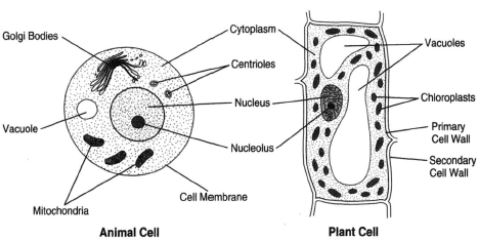 Question-6 State the difference between eukaryotes and prokaryotes.

Answer: Following are the differences between eukaryotes and prokaryotes

Question-7 Where are chromosomes found in a cell? State their function.

Answer: Chromosomes are found in the nucleus of a cell. Chromosomes are thread-like structures that carry genes which play a vital role in the inheritance of characters from parents to their offspring.

Answer: In a living organism, various organs are present which perform various functions such as digestion, respiration, reproduction, movement, etc. Organs are specific for their function that they perform. For example, leaves carry out photosynthesis, ovary produces ova, etc. In an organism specific tissues are present that facilitate it to perform its specific function. Furthermore, a tissue is composed of similar types of cells. Hence, we can say that cells ate the basic structural unit of living organisms.

Question-9 Explain why chloroplasts are found only in plant cells?

1. This is necessary for photosynthesis.
3. Term for component present in the cytoplasm.
6. The living substance in the cell.
8. Unit of inheritance present on the chromosome.

1. Green Plastids.
2. Formed by collection of tissues.
4. It separates the contents of the cell from the surrounding medium.
5. Empty structure in the cytoplasm.
7. A group of cells.