1. In what ways does the media play an important role in a democracy?

Role of media in democracy:

(i) It is the backbone of a democracy which makes us aware of social, political and economical activities.

(ii) Media provides news and discussions taking place in the country and the world.

(iii) It gives us information about how the government works.

(v) It raises issues or problems related to the common man in front of the nation.

(vi) It also acts as a reminder for the politicians or ministers about their promises.

2. Can you give this diagram a title? What do you understand about the link between media and big business from this diagram? 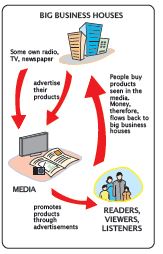 The title given to this diagram is "Media and Business house money cycle".

From this diagram, we understood that there is a cyclic flow of money between media and big business.

(i) Media shows news of interest to the people on radio, TV and newspaper.

(iii) Media show these advertisements by taking some charges and makes profit.

(iv) People buy these products of the big business and thus the cost and advertisements along with some profit returns to them.

3. You have read about the ways in which the media ‘sets the agenda’. What kind of effect does this have in a democracy? Provide two examples to support your point of view.

Effects of agenda in a democracy:

(i) It influences the thought, feelings and actions of the nation.

(ii) It brings attention of the people towards various issues.

(iii) Somehow, it has influenced our lives and shaped our thoughts.

(i) The media drew our attention to alarming levels of pesticides in cola drinks. They published reports that indicated the high level of pesticides and thus made us aware of the need to regularly monitor these colas according to international quality and safety standards.

(ii) It published the news of the mass numbers of suicide committed by the farmers which leads to large scale movement and people support and thus forced the government to look further into this issues.

4. As a class project, decide to focus on a particular news topic and cut out stories from different newspapers on this. Also watch the coverage of this topic on TV news. Compare two newspapers and write down the similarity and differences in their reports. It might help to ask the following questions–

a. What information is this article providing?

b. What information is it leaving out?

c. From whose point of view is the article being written?

d. Whose point of view is being left out and why?