NCERT Solutions for Class 7 English for The Rebel Poem 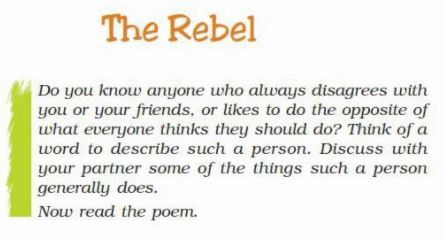 Working with the Poem
1. Answer the following questions.
(i) If someone doesn’t wear a uniform to school, what do you think the teacher will say?
(ii) When everyone wants a clear sky, what does the rebel want most?
(iii) If the rebel has a dog for a pet, what is everyone else likely to have?
(iv) Why is it good to have rebels?
(v) Why is it not good to be a rebel oneself?
(vi) Would you like to be a rebel? If yes, why? If not, why not?
Answer
(i) The teacher will ask him/her about the reason for not being in uniform and then takes action according to the reply.

(ii) When everyone wants a clear sky, the rebel wants rain the most.

(iii) If the rebel has a dog for a pet, then everyone else is likely to have a cat.

(iv) It is good to have rebels because very few people have the power to oppose the decision of the majority. They think differently and fearlessly stand with their choices which can be beneficial.

(v) It is not good to rebel oneself because no one will like you. It keeps you apart from the people and they will be like enemy for you.

(vi) No, I would not like to be a rebel because i don't have the guts to opposes the majority and moreover i can't hurt the feelings of the people. I don't want to be a source of bitterness among the people.


2. Find in the poem an antonym (a word opposite in meaning) for each of the following words.
(i) long
(ii) grow
(iii) quietness
(iv) sober
(v) lost

(i)Short
(ii)Cut
(iii)Disturbance
(iv)Fantastic
(v)Find
3. Find in the poem lines that match the following. Read both one after the other.
(i) The rebel refuses to cut his hair.
(ii) He says cats are better.
(iii) He recommends dogs.
(iv) He is unhappy because there is no sun.
(v) He is noisy on purpose.
Answer

Download Class 7 English assignments. Practice tests for Class 7 for English has been made for all important topics in NCERT book and is available...
More..

Download Class 7 English assignments. Practice tests for Class 7 for English has been made for all important topics in NCERT book and is available...
More..

Access CBSE Class 7 English MCQs for MCQs for important topics for all chapters in MCQs based on CBSE and NCERT pattern. Access full database of...
More..