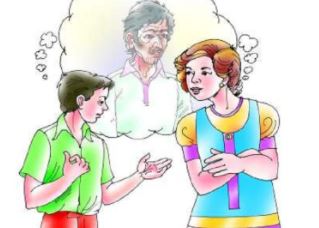 Question 1. What did Nishad give Mr Nath? Why?

Nishad gave a bar of chocolate to Mr. Naphtha because he thought that Mr. Nath was poor and starving.

Question 2. What is “strange” about Mr Nath’s Sundays?

On every Sunday, Mr. Nath was with a tall, fair, stout man wearing spectacles in his room who used to talk a lot unlike Mr. Nath.

Question 3. Why did Nishad and Maya get a holiday?

The monsoon broke and flooded the streets with a heavy downpour. Therefore, no traffic could move through the flooded roads so Nishad and Maya got an unexpected holiday.

Question 1. What does Nishad find out about Mr Nath from Ramesh?

Arrange the information as suggested below.

• What he drinks, and when

Nishad finds out from Ramesh that Mr. Nath took two meals in a day every morning and evening. He was not particular about what he eats, it's always the same food - two chapattis, some dal and a vegetable. He drank two cups of tea, one in the morning and one in the afternoon. He pays cash and tips well.

Question 2. Why does Maya think Mr Nath is a crook? Who does she say the Sunday visitor is?

Maya thought that Mr. Nath was a crook because of his strange appearance and he did not work. He never talked to anyone at Shankar House though he had been living there for more than a year. He had scars on his face which according to Maya, must have been the burn scars which would have got when police had set his house on fire. Moreover, he didn't receive any letters and had only one visitor to visit him.

She said that the Sunday visitor must be his accomplice in crime and he came every now and then to give part of it to his partner.

Question 3. Does Nishad agree with Maya about Mr Nath? How does he feel about him?

No, Nishad didn't agree with Maya about Mr. Nath. He felt that he must be so lonely and wanted to have friends. He said that he was not a criminal because he was so thin and looked poor and starving.

He argued with Maya that he can't be a bad man if he gave Ramesh such generous tips.

Question 1. The word ‘tip’ has only three letters but many meanings.

Match the word with its meanings below.

(i) finger tips - the end of one's fingers

(v) tip the bot over - make the boat overturn

Question 2. The words helper, companion, partner and accomplice have very similar meanings, but each word is typically used in certain phrases. Can you fill in the blanks below with the most commonly used words? A dictionary may help you.

(ii) my companion on the journey

(iv) a faithful companion such as a dog

(viii) his accomplice in his criminal activities

Question 3. Now let us look at the uses of the word break. Match the word with its meanings below. Try to find at least three other ways in which to use the word.

(iv) Her voice broke and    –    the beginning of daylight she cried

(i) The storm broke – it began or burst into activity

(ii) daybreak – the beginning of daylight

(iv) Her voice broke and she cried – could not speak; was too sad to speak

(v) The heat wave broke – this kind of weather ended

(vii) break a strike – end it by making the workers submit