Question 1.State whether True or False.

(a) Harishena composed a prashasti in praise of Gautamiputra Shri Satakarni. (False)

(b) The rulers of Aryavarta brought tribute for samudragupta.(False)

(c) There were twelve rulers in Dakshinapatha. (True)

(d) Taxila and Maduari were important centres under the control of Gupta rulers. (False)

(e) Aihole was the capital of the Pallavas. (False)

Answer. The two authors who wrote about Harsha-vardhana are:

(2) Xuan-Zang , the Chinese traveller who left a detailed account of what he saw in the count.

Question 3.What changes do you find in the army at this time?

Answer. The changes made in the army at this time were:

(1) Like earlier rulers , the king maintained a well organize army, with elephants,chariots, cavalry and foot soldiers.

(2) There were military leaders who provided the king with troops whenever the king asked for them. They were not given regular salaries, but got grants of land . They collected the revenue and used it to maintain soldiers and horses and provide equipment for warfare. These men were known as samantas.

Question 4.What were the new administrative arrangements during this period ?

Answer. The new administrative arrangements during this period were:

1. Some important administrative posts were made hereditary, e.g, the poet Harishena was a maha-danda-nayaka or the cheif juidicial; officer, like his father.

2. One person held many offices, e.g, besides being a maha-danda-nayaka , Harishena was kumar-amatya which means an important minister, and a sandhi-vigrahika meaning minister of ward and peace.

3. Important men probably had a say in local administration. These inculoed negar-shreshti or chierf banker ormerchant of the city, the sarthavah or leader of the merchant caravans, the partrthamm-kulika or the cheif carftman and the head of the Kayasthas or scribes.

Question 5.What do you think Arvind would have to do if he was acting as Samundragupta?

(1) Lead the army and successfully plan his campaign in almost all parts of India.

(2) Establish an efficient administration and a strong government.

(3) Look after the welfare of the people.

Question 6.Do you think ordinary people would have read and understood the prashastis? Give reasons for your answer.

(1) The parashasti in praise of Samundragupta was written in sanskrit language, the language of the learned people.

(2) The parashasti was composed in very long sentences. So the people may not have understood the prashasti.

Question 7.If you had to make a genealogy for yourself, who are the people you would include in it? How many generations would you like to show? Make a chart and fill it.

Answer. If I have to a genealogy of myself. I will include 4 generations (counting myself) The names are given in Alphabets. 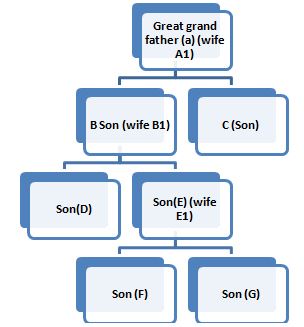 Question 8. How do you think wars affect the lives of ordinary people today?

Answer. In the present times, the wars adversely affect the lives of the people e.g:

(a) The economy of the country is disrupted and prices of the essential commodities also start rising.

(b) There can be large scale destruction , caused due to air warfare.

(c) Chemical warfare and use of nuclear bombs can affect not only the present generation but also many generation to come.

Download Class 6 Social Science assignments. Practice tests for Class 6 for Social Science has been made for all important topics in NCERT book and is...
More..

Download Class 6 Social Science assignments. Practice tests for Class 6 for Social Science has been made for all important topics in NCERT book and is...
More..

CBSE Board Results for Class 10 and Class 12

Anticipated CBSE result 2020 Date and Time: This is all you wish to know! Here is the news which all students are waiting for. The expected date and time for the CBSE Class X and XII Results 2020 can be viewed here by the students. CBSE Result 2020: The Central Board...

CBSE has announced a significant change in the CBSE 10th and 12th mark sheet of the results to be given to the students. The CBSE board also decided to end the use of the words “failed” or “compartmental” given to students in the CBSE Board Report 2020 mark sheet....

Due to the increased tension in some parts of Delhi, Delhi government has decided to postpone the CBSE boards exams for class 10 and class 12 in North East Delhi schools only. The dates on which the exams will be scheduled again has not been notified by CBSE till now....