Question 1. State whether True or False.

(a) Rajas who let the Ashvamedha Horse pass through their lands were invited to the sacrifice.(True)

(b) The charioteer sprinkled sacred water on the king.(False)

(c) Archaeologists have found places in the settlements of the janapadas.(False)

(d) Pots to store were made out of painted Grey Ware.(False)

(e) Many cities in the mahajanapadas were fortified. (True)

Question 2. Fill in the chart given below with the terms:hunters-gatherers, farmers, traders, craft persons, herders. those who paid taxes. 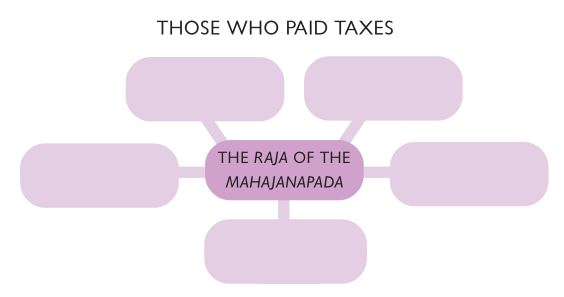 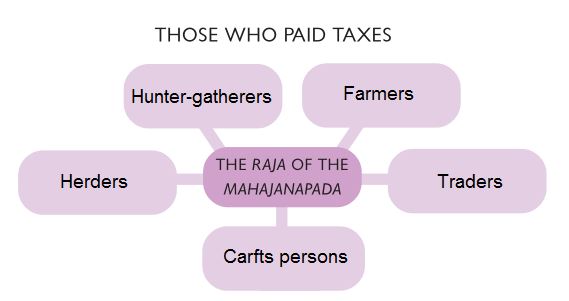 Question 3. Who were the groups who could not participate in the assemblies of the ganas?

Answer. Women, slaves and Kammakaras could not participate in these assemblies.

Question 4. Why did the rajas of the Mahajanapada build forts?

Answer. forts were built by the rajas of the Mahajanapada because people were afraid of attacks from other kings and needed protection. It is also likely that some rulers wanted to show how rich and powerful.they were by building large, tall and impressive walls around their cities.

Question 5. In what ways are present-day elections different from the ways in which rulers were chosen in janapadas.

Answer. In the present-day elections in India, we have adopted the idea of universal adult franchise, where every person above the age 18 years has a right to vote. Voting is based on the principal of man one vote.

The rulers who performed the ashvamedha sacrifice were recognised as being the rulers of janapadas.

Question 6. Find the state in which you live in the political map on page 136. Were there any janapadas in your state? If Yes, name them. if not, name the janapadas that would have been closest to your state, and mention whether they were to the east, west, north or south.

Answer. The janapada Indraprastha was in Delhi. The archaeologists have excavated Purana Qila,.

Question 7. Find out whether any of the groups mentioned in answer 2 pay taxes today.

Question 8. Find out whether any the groups mentioned in answer 3 having voting right at present.

Answer. The people who could not the assemblies were women, slaves and Karmmakaras.

In the present times slavery has been abolished. every democracy is based on the principal of universal adult franchise. Every one has the right to vote in the election after a specific age.