Discuss these questions in pairs before you write the answers.

1.Why did the dog feel the need for a master?

Answer : The dog felt the need for a master because he was sick and tired of wandering about alone, looking for food and afraid of those who were stronger than him.

2..Who did he first choose as his master? Why did he leave that master?

Answer: The dog first chose a big, strong and fierce wolf as his master. Once, The dog saw that the wolf was afraid that the bear would eat them up. Since the dog wanted to serve only the strongest, he left the wolf and asked the bear who was stronger than the wolf to be his master.

Answer : He chose the bear to be his next master.

4.Why did he serve the Lion for a long time?

Answer : He serve the Lion for a long time because he found there was no more powerful and stronger than lion in the forest and so no one dared to touch the dog or offend him in any way. Therefore, the dog lived happily by serving the lion for a long time.

5. Who did he finally choose as his master and why?

B. A summary of the story is given below. Fill in the blanks to complete it taking appropriate phrases from the box.

Answer : This is the story of  a dog, who used to be his own master  . He decided to find a master stronger than anyone else. First he found  a wolf , but the wolf was afraid of the bear . The dog thought that the bear was the strongest of all. After some time the dog met a lion, who seemed the strongest. He stayed with the lion for a long time. One day he realised that the lion was afraid of man. To this day, the dog remains man’s best friend.

A. Each word in the box given below indicates a large number of… For example,‘a herd of cows’ refers to many cows. Complete each of the following phrases with a suitable word from the box.

B. Make nouns from the words given below by adding –ness or –ity. (For some words we need to add just –ty, or –y.)

C. Wordsearch
• There are twelve words hidden in this table.
• Six can be found horizontally and the remaining six vertically.
• All of them are describing words like ‘good’, ‘happy’, etc.
• The first letters of the words are given below: 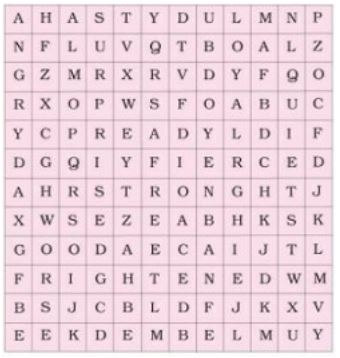 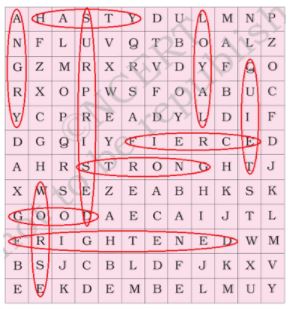 D 1. Find the opposites of these words in the text above.

Answer: the wild dog of Australia which looks and behaves like domestic dog. 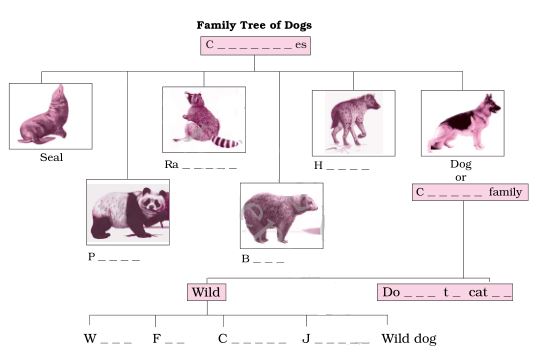 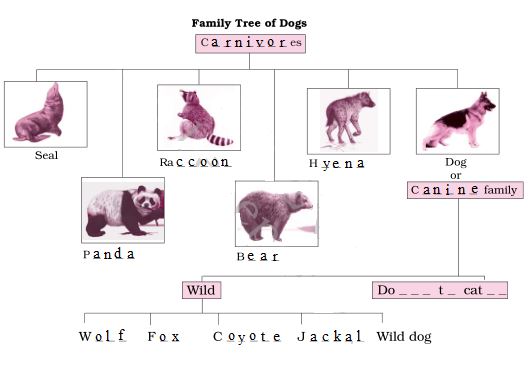 2. Read these lines from the poem:

With only a sail

The movement of the tailless kite is compared to a ship with a sail. This is called a  simile. Can you suggest what or who the following actions may be compared to?

Download Class 6 English assignments. Practice tests for Class 6 for English has been made for all important topics in NCERT book and is available...
More..

Download Class 6 English assignments. Practice tests for Class 6 for English has been made for all important topics in NCERT book and is available...
More..