NCERT Solutions for Class 5 EVS for Chapter 20 Whose forests

Ans.Forest is a large area thickly covered with different varieties of trees and plants. It also includes different animals, insects and birds living there.

2. If someone grew lots of trees close to each other, would this become a forest?

Ans.No, if someone grows lots of trees to each other, this would not necessarily become a forest because this can be in a park or garden.

3. Other than trees what all is there in a forest?

4. Do all forests have similar type of trees? How many trees can you identify?

Ans.No, all forests do not have similar types of trees. I can identify about 4-5 trees such as those of mango, neem, coconut, guava, peepal etc.

5. Suryamani says, “If the forest are not there, we too will not remain”. Why so?

Ans.The forests are an essential part of our life. They keep our environment neat and clean by absorbing most of the harmful gases and releasing oxygen. We also get many fruits, vegetables, medicines from these forest. Besides, many people living in the forest obtain their livelihood form it. Therefore, Suayamani says if the forest would disappear, we will be destroyed.

6. Do you know anyone who loves the forest?

Ans.Yes, myself and my friends are very fond of forest.

7. The contractor did not allow Suryamani’s people to go into the forest? Why?

Ans.The contractor would have been cutting the trees and selling the wood for his own profit. He thought if the forest people will use the forest for their needs, it would be a loss to him. Therefore, he did not allow Suryamani’s people to go into the forest.

8. Is there any place around your area which you feel should be open to everyone, but where people are not allowed to go?

Ans.Yes, there is a lake in our town. But, people are not allowed to go there and enjoy its natural beauty, until they pay for the entry ticket. I think this is wrong.

9. Who do you think the forest belongs to?

Ans.I think that the forest belongs to everyone and not a single person.

10. Bhudiyamai said – “Forest is our ‘collective bank’ not yours or mine alone”. Are there some other things which are our collective wealth? So if someone uses more, everyone would suffer?

Ans.Yes, there are few other things which I believe are our collective wealth, if someone uses them more, everyone would be at loss, such as

(i) The ground water

(ii) The fishes in the seas, rivers etc.

(iii) The minerals found under the earth

(iv) The fossil fuels such as coal, petroleum etc.

11. Do you have a friend with whom you can share everything?

Ans.Yes, I have a close friend of mine with whom I can share everything.

12. Some people have moved so far away from the forest that they can’t understand the lives of forest people. Some even call them ‘jungli’. Why is it not correct to say this?

Ans.The word ‘jungli’ is a hindi word which is commonly used in abusive sense to refer to someone who is uncivilized. But the forest dwellers are not uncivilized. Though they are living in forest in a balanced and civilized manner. Thus, if we call them ‘jungli’ it would hurt them.

13. What do you know about how adivasis live? Write and draw a picture. 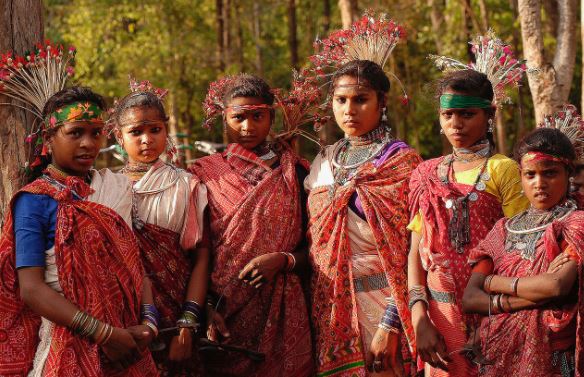 Adivasis live a very simple life. They wear the most ordinary clothes, sometimes made up of leaves and flowers, they survive on fruit, vegetable, prepare medicines from various various forest products. They take woods from the forests and prepare their food, prepare ornaments and decorative articles from leaves and flowers, baskets of bamboo, plates from leaves etc. and sell these in the market to earn their living.

14. Do you have and Adivasi friend? What have you learnt about the forest from her?

Ans.Yes, I do have an Adivasi friend. I have learnt many things from her about forests such as:

(i) To prepare ornaments and decorative articles from flowers and leaves.

(ii) To prepare medicines out of the herbs found there

(iii) To prepare plates out of the dead and fallen leaves

(iv) To prepare baskets out of bamboo

15. Do you know of anyone who works to save forests?

Ans.Yes, I know about a person in my neighbourhood who runs her own NGO and works for protecting the forest.

16. What is your dream? What will you do to make your dream come true?

Ans.I wish to become an engineer. I will work hard and study to make my dream come true.

17. Collect report about forests from newspapers. Did you find any news about how the cutting down of forests affects the weather. How?

Ans.Yes, these days, there is a lot of news on the effects of forest cutting on the weather. Cutting trees reduces the occurance of rainfall which affects our crops. It also contributes in increasing the global warming (that is increasing the temperature on Earth).

18. In ‘Torang’ Suryaman does a lot to keep the kuduk music, dance and tradition alike. Would you like to do something like this for your community? What would you like to keep alive?

Ans.Yes, I would also like to do something for my community. I would like to preserve the language and costumes of my community.

19. Is there any factory or some construction work going on in and round your area? What type of work?

Ans.Yes, recently a factory for making rubber is being constructed recently in an area a little away from our locality.

20. Due to the factory is there any effect on the trees and the land? Have the people in that area raised this issue?

Ans.Yes, due to this factory a very big park has been destroyed. About 100 trees have been cut. As a result the people living in the nearby areas got annoyed and they raised this issue in front of the president of that area. They complained about the increasing pollution due to the cutting of trees.

Ans.This is the map of our country, India. The places having very thick forest and those which with less thick forest being shown in the map.

22. You have read Sikhya letter. Look for Orissa in the map.

Ans.Orissa is located towards the east of Chattisgarh, south of West Bengal an north east Andhra Pradesh.

23. Is there a sea close to Orissa? How did you find out?

Ans.Yes, there is an ocean Bay of Bengal close to Orissa. An ocean is identified in a map by blue colour. Its name is also given in the map.

24. Which are the states have sea on one side?

25. Where is Suryamani’s state Jharkhand on the map?

Ans.Suryanami’s state Jharkhand is situated towards the south of Bihar, north east of Orissa and towards the east of Madhya Pardesh.

26. Where are forest on the map? How will you find these?

28. For someone in Madhya Pradesh in which direction would the country’s thickest forest be? Name those states.

Ans.If someone is in Madhya Pradesh then the thickest forest of the country would be on his North eastern side. These states are Arunachal Pradesh, Sikkim, West Bengal, Jharkhand and Chhattisgarh.

29. Which are the states around Mizoram?

Ans.The states around Mizoram are – Tripura, Assam and Manipur.

30. Chamur said they measure land using tin. Which are the other ways of measuring land?

Ans.The other ways of measuring land are – by meter, acres, gaj, miles etc.

31. Returning from school, children drawn ater in a bamboo cup. Who do you think would have made this cup and kept it in the forest? Why?

Ans.The bamboo cup would have been made by the adivasis living in the forest in order to help the other people passing from the forest.

32. Have your ever seen anything which people are free to use, with no one there looking after it?

Ans.Yes, I have seen a few piau, bavidis that people are free to use, with no one looking after them.

33. Find out more about ‘cheraw’ dance? Do it in your class. But be careful and don’t hust yourself.

Ans.Cheraw is one of the traditional and oldest dance of Mizoram since the time when Mizos used to live on the hills of China. This dance is performed by an individual or family in most of their festivals and big occasions such as when there is a bumper harvest of a crop. It is also performed in marriage occasions. In this dance, men sit face to face on the ground and tap and beat long pairs of horizontal and cross bamboo sticks in a rhythmic beat. Girls in colourful Mizo costumes dance in and out between the bamboo sticks. Gongs and drums are used to accompany the dance. This is the most popular and colourful dance of the Mizos.

34. What is similar and what is different between Jhoom farming and Bhaskerbha’s was farming?

In both these methods of farming the manures prepared in the factories are not used. Rather, the natural manures formed automatically in the farms itself is used.

The differences between the two farming is Bhaskar Bhai used plant waste like dead and rotten leaves, stem, roots etc. to make manure. He dumped them in a pit and allowed to decompose. This automatically got converted into manure. Further the earthworms also formed small pits in the soil and make it soft and ready for farming.

Whereas in Jhoom farming, the weeds are burnt in the field and the ashes are mixed with the soil which acts like a manure. Moreover, the land is not ploughed but shallow trenches are made in the soil in which the seeds are sown. Mixed seeds of various crops like maize, paddy, chillies, vegetables, etc are sown.

35. Explain in your own words why forests are important for the people living in the forests?

36. Did you find something in Jhoom farming? What is it?

Ans.Yes, there are few things are very interesting in Jhoom farming, such as

(i) The weeds are not removed but these are burnt and the ashes are mixed with the soil to make it ready for sowing.

(ii) The land is not ploughed, but shallow trenches are made in the soil, in which the seeds are sown.

Download Printable Worksheets, test papers for Class 5 EVS with questions answers for all topics and chapters as per CBSE, NCERT, KVS syllabus
More..