1. Do you like to work and play with others?

Ans. I like to work and play with other.

2. If nobody passes the ball in a basketball game, then you can’t.

3. In a relay race, if no one passes the baton, then

4. Name the team members needed for the following.

(a) To play cricket we need

(c) To run a good school we need

(d) To run a restaurant we need

5. Complete the sets of rhyming words.

6. Now form questions for the answers given in the speech bubbles.

Ans. The shoe was lost because of the nail.

(b) Why was the battle lost?

Ans. The battle was lost because there was no rider.

(c) Why was the kingdom lost?

Ans. The kingdom was lost because the battle could not be fought.

(a) Why was the rider lost?

Ans. The rider was lost for want of a horse.

(b) Why was the horse lost?

Ans. The horse was lost because of the shoe.

Ans. All was lost for the want of a horse shoe nail.

8. Look at the picture and answer the questions in the sentence, using the word clues given in the box. 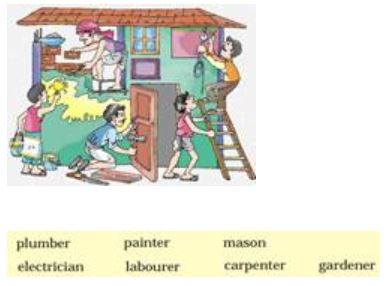 (a) Who is laying the bricks?

Ans. A mason is laying the bricks.

(b) Who is holding the ladder?

Ans. A labourer is holding the ladder.

Ans. An electrician is on the ladder.

(d) Who is making the door?

Ans. A carpenter is making the door.

(e) Who is painting the walls?

Ans. A painter is painting the walls.

9. Now make up a story about the picture. Give names to the people. Write the story showing the importance of teamwork.

Ans. My Grandmother was going to build a house. I wondered how the house would be made. My grandmother told me that it was teamwork. He asked a contractor, Mukesh, to build the house. Mukesh had a team of workers. His mason Lal Chand and a few labourers started to build walls. And plumber Mannu laid water pipes. Bhatia, electrician, did all the electric work. Ram Swaroop the carpenter, Ram Lochan fitted the door and window the painter did a wonderful work. I was surprised how with the teamwork the contractor finished all the work in short time.

10. In group of five, discuss what you enjoy doing alone and what you like doing in a group.

11. In your family, what activities are done individually and as a group?

Ans. My mother decides what dishes to cook.

My father decides where to invest his money.

I decide what to study.

We decide where we shall go for a holiday.

12. In the puzzle find the words given in the column. Notice that these words are formed by joining the words. One is done for you. Find some more such words. 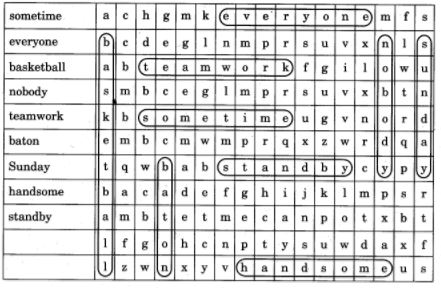 Ans. I have a kite but need a friend to fly it with.

I know a song but need someone to hear it,

I have a ball but need someone to catch it,

I know a joke but need someone to share it with.

I have a telephone but need someone to talk to.

I have a dream but need someone to joy it.

I have lost my way so need someone to.

14. Write the contractions for the following phrases.

(iii) have not haven’t

15. Write the full forms for the following.

(iii) she’ll she will

Seven Motivational tips for every student

If you’re are a student or a learner and you doesn’t feel like study then this article is going to be very important for you, Reading constantly and Staying motivated as a student is one of the most challenging tasks and barriers to educational success. Education is...