1. Why did all the children hate Hari?

(i) Because he would not talk to anyone.

(ii) Because he always pinched them.

(iii) Because he loved stealing their food.

Ans. (ii) Because he always pinched them.

2. “Nobody took Hari’s hand. Nobody went near him. Nobody played with him.” This shows that Hari had

3. Which of the following actions would make a friendly person? Write them down.

· Pushing a smaller boy and making him cry

· Being helpful to everyone.

· Helping your classmates in school.

· Mocking at friends and hurting their feelings.

Actions which would make a friendly person

Ans. (i) Respecting other people.

(ii) Being helpful to everyone.

(iii) Helping your classmates in school. 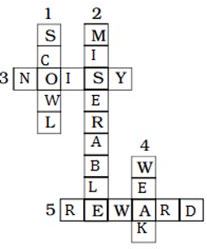 (i) Hari fell down in pain.

(ii) There were bruises on his body.

(iii) Hari painted himself in colours.

(iv) Hari had a black and blue shirt.

Ans. (ii) There were bruises on his body.

7. Give the full forms of

Ans. Will not, were not, would not, could not.

9. Now can you make sentences with these words?

Merrily: All the student rushed out Merrily, when the last ball rang.

Wearily: In the evening, the peasant walked home wearily.

Doubly: She is doubley blessed with a son and a promotion.

Drearily: Her sister was dressed on her birthday party.

Brightly: The diamond shines brightly in the dark.

Badly: He badly entertained the guest.

10. How did the seaside creatures, the crab, the lobster etc. teach Hari a lesson? Write in a few lines.

Ans. The crab, the lobster, shrimps and prawns pinched Hari hard. They pinched till he was black and blue and cried in pain. Then he realized how pinching hurts. He decided never to pinch anybody in failure.

11. Fill in the blanks with appropriate articles.

12. Can you tell a difference between a turtle and a tortoise. Write a few lines.

13. Describe what is happening in the picture. Use is/are and ing to make your sentences. Clues are given in the box. 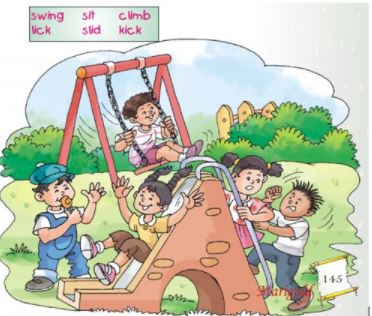 14. Imagine what the children will do in the playground tomorrow. You can take some hints from the words given in the box.

(iii) Sunny and Munny will run a race.

(iv) Team A and Team B will play a football match.

(v) Sonu and Kabir will jump.

(vi) Anwar will participate in a race competition tomorrow.