Read the following passage and answer the questions that follow:

Q1. Which floor pattern do you like the most?

Q2. Have you seen such patterns any where?

Ans. I have not seen such patterns anywhere.

Q1. Which pattern is made in a circle?

Ans. pattern J is made in a circle.

Q2. In which pattern can you show mirror halves? Draw a line.

Ans. In pattern h. we can show mirror halves. Dotted line in the figure shows the mirror line.

Ans. Some new floor patterns are as under: 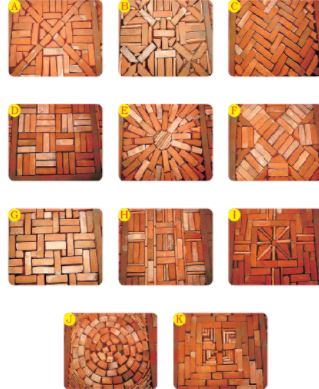 How to draw a brick?

These are two photos of the same brick.

Ans. The photo showing three faces is shown as encircled. 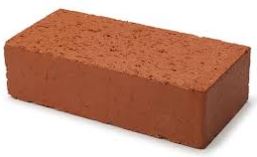 Q2. How many faces in all does a brick have?

Ans. A brick has six faces.

Ans. No face of a brick is a square.

Q4. Draw the smallest face of the brick.

Ans. The smallest face of the brick is as shown.

Q5. Which of these are the faces of a brick? Mark a (Tick)

Ans. The faces of a brick are marked as (Tick)

Q6. Which of these is a drawing of a brick?

Ans. Second and fourth from left are drawings of a brick.

Q7. Make a drawing of this box to show 3 of its faces.

Ans. A drawing of the box with 3 faces is as shown.

Q8. Can you make a drawing of a brick which shows 4 of its faces. ?

Ans. We cannot make a drawing of a brick showing 4 of its faces.

Q1. What do you think? Which wall will be stronger?

Ans. Azinab’s wall will be stronger than that of Muniya.

Q2. Now match the photo of each wall with the correct drawing in the books:

Q1. How many different ‘jaali’ patterns can you see in these two photos?

Ans. Five different ‘jaali’ patterns can be seen in these two photos.

Q1. Now colour some bricks red and make your own ‘jaali’ patterns in the wall drawn in the book.

Ans. My own ‘jaali pattern in the wall is as below:

Q2. Now draw some jhorokha patterns on the wall here. You can shade it black. 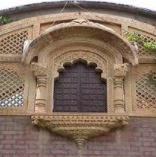 Q1. Look for other arches around you and draw them.

Ans. Some other arches are shown below:

Q1. Have you seen arches in a bridge?

Ans. Yes. I have seen arches in a bridge.

Q2. Where else have you seen an arch?

Ans. I have seen an arch in a tunnel.

Q3. Isn’t the bricks? Look around.

Ans. Yes, the jaali of this window is beautiful. Yes, I have seen thin brick in some very old buildings and forts.

Q1. Which of these bricks have curved edges?

Ans. Bricks 1 and 2 from the top left have curved edges.

Q2. How many faces do you see of the longest brick?

Ans. Two faces are seen in case of the longest brick.

Q3. Is there any brick which has more than six faces?

Ans. Yes, there is a brick having more than six faces. It has a broken part which increase the number of faces.

Find out : The Size of a Brick

Q1. Have you seen bricks of different sizes?

Ans. It is 9 inches in length.

Q2. Muniya wants to make a wall I meter long. How many bricks will she beed to put in a line?

Ans. She needs more than 4 bricks but less than 5 bricks to make a wall 1 metre long.

Bricks and Bricks = Hot and Fresh !

Q1. Ganesh and Sahiba live near a kiln where bricks are made.

Ans. The chimney’s height is about 50 metres.

Q. 1 Here are four pictures form the brick kiln. These pictures are jumbled up. Look at them carfully.

Ans. The correct order in which a brick is made out of soil dug form the earth is : C, D, B and A.

Q1. Have you seen a brick kiln? Did you try to guess the number of bricks kept there?

Ans. Yes, I have seen a brick kiln. There may be more than one lakh bricks kept in brick kiln.

Q2. Can you try to write one lakh?

Q1. Look at these photos (given in book) and guess how many brick are carried by this truck.

Ans. It is carrying around five thousand bricks.

Q2. Also find out form a truck driver how many bricks they can carry in one truck.

Ans. A truck driver tells that he carries nearly five thousand bricks in his truck.

Q3. Bhajan decided to buy the new bricks form Brickabad. He bought three thousand bricks. How much did pay ?

Download past year Question Papers for Class 4 Mathematics as per CBSE NCERT KVS syllabus with solutions in pdf free
More..

Download Worksheets for Class 4 Mathematics made for all important topics and is available for free download in pdf, chapter wise assignments or booklet with...
More..

Download Printable Worksheets, test papers for Class 4 Mathematics with questions answers for all topics and chapters as per CBSE, NCERT, KVS syllabus
More..