Q.1. when you play Kabaddi, how many players are there in a team?

Q.2. When Shyamala touched the middle line, how many players got out?

Q.3. How do you solve your arguments or fights while playing?

Ans. We listen to both and then decide who is right.

Q.4. Do you have ways to resolve fights, which can be used in various games?

Q.1. Try to hold your breath and keep saying Kabaddi-Kabaddi. How many times could you say it.

Q.2. How many times can you say it, while you are playing Kabaddi? Is there any difference?

Ans. 15-20 times. While playing the number of times of repeating Kabaddi-Kabaddi is reduced.

Q.3. Make a picture in your notebook to show how Shyamala managed to get the entire opposition team out in one go? 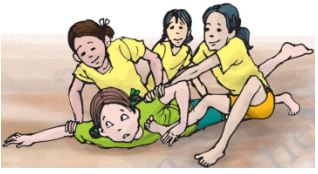 Q.4. What does it mean to be out in games? When does one get out in Kabaddi?

Ans. Beir go out in games means the player will not be allowed to continue the game. In kabaddi a player gets out of three ways:

(1) If he is stopped by the opposition.

(2) He touches opposition players and could not stop him.

(3) If he looses breath and cannot say Kabaddi-Kabaddi.

Q.6. In Kabaddi, the entire team was out, because Shyamala had touched the line. What are some other games in which, the line is very important?

Q.7. Have you learnt of anyone who has learnt any game from a coach?

Q.8. Do you know of anyone who has learnt any game from a coach?

Ans. My friend is learning judo.

Q.9. In Kabaddi, the entire team ‘out’ because Shyamala had touched the line. What are some other games in which you have to touch something or colours?