1. Were the ideas of the Upanishadic thinkers different from those of the fatalists and materialists? Give reasons for your answer.

• Many Upanishadic ideas show that people wanted to understand the meaning of life, possibility of afterlife and rebirth. Thinkers wanted to understand and express nature of ultimate reality. Those outside Vedic tradition questioned the idea of a single ultimate reality. People also questioned significance of sacrifices. Chhandogya Upanishad discusses the nature of the self and describes the wind as the true sacrifice.

• Makkhali Gosala, a teacher of Ajivikas, who were fatalists, told king Ajatasattu, ruler of Magadha, that one could neither gain nor rid oneself of karma. Neither pleasure nor pain could be altered, lessened or increased. Each individual would take one's course to end sorrow. For fatalists, everything is predetermined.

• The Lokayata philosopher, Ajita Kesakambalin, of materialist tradition, taught that neither alms nor sacrifice, neither this world nor afterlife, existed. Humans comprised four elements. When one died, all his components returned to the elements. No individual survived after death.

2. Summarise the central teachings of lainism.

• Jainism's core spiritual philosophy preaches that the entire world is animated: even stones, rocks and have water life.

• It teaches that living beings (humans, animals, plants and insects) should not be harmed.

• Its principle of ahimsa has influenced Indian thinking as a whole.

• It believes that the cycle of birth and rebirth is shaped through karma.

•  Asceticism and penance are required to free oneself from the cycle of karma by renouncing the world; therefore, very simple life is a necessary condition of salvation.

3. Discuss the role of the begums of Bhopal in preserving the stupa at Sanchi.

• Shahjehan Begum of Bhopal gave permission to Europeans to create plaster-cast copies of the eastern gateway of the stupa at Sanchi to be displayed in museums; it popularised the architecturaI features of the stupa.

• Her successor, Sultan Jehan Begum provided money for the preservation of the entire site.

• In appreciation of her efforts, John Marshall dedicated his important volumes on Sanchi to Sultan Jehan.

• She funded the museum and guesthouse where he lived and wrote the volumes.

• She also funded the publication of the volumes.

4. Read this short inscription and answer:

(a) How did Dhanavati date her inscription?

(b) Why do you think she installed an image of the Bodhisatta?

(c) Who were the relatives she mentioned?

(d) What Buddhist text did she know?

(e) From whom did she learn this text?

(a) Dhanavati dates her inscription in the 33rd year of the reign of the Kushana ruler maharaja Huvishka and in the first month of the summer season on the eighth day.

(b) She installed an image of the Bodhisatta because she followed Mahayana Buddhism.

(c) The relatives she mentioned were her father and mother, and her aunt, the bhikkhuni Buddhamita.

(e) She learned this text from bhikkhu Bala.

5. Why do you think women and men joined the sangha?

• Women and men joined the sangha to spread the teachings of the Buddha.

• Initially, Buddhist sangha admitted only men, but later women were also allowed to be part of it.

• This change was made possible through the mediation of Ananda, one of the Buddha's dearest disciples.

• The Buddha's foster mother, Mahapajapati Gotami was the first woman to be ordained as a bhikkhuni.

• Many women became teachers of dhamma and went on to become theris.

• They also became respected women who had attained liberation.

Write a short essay (about 500 words) on the following:

6. To what extent does knowledge of Buddhist literature help in understanding the sculpture at Sanchi?

• The sculpture at Sanchi can be understood only with the knowledge of Buddhist literature.

•  Art historians try to understand the meaning of sculpture by comparing it with textual evidence.

• They study hagiographies of the Buddha to decode the scene in sculpture and their stories.

•  For example, Buddhist hagiographies highlight the Buddha attaining enlightenment while meditating under a tree.

•  But many sculptures depict the Buddha through symbols (empty seat to indicate his meditation, stupa for the mahaparinibbana and the wheel).

• Tree in Buddhist sculptures does not stand for a tree, but symbolizes an event in the life of the Buddha.

• To understand such symbols in the sculpture, the knowledge of Buddhist literature is important.

7. Figs. 4.32 and 4.33 are two scenes from Sanchi. Describe what you see in each of them, focusing on the architecture, plants and animals, and the activities. Identify which one shows a rural scene and which an urban scene,giving reasons for your answer. 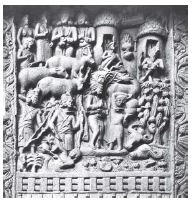 • The Fig. 4.32 reflects on its top right a fire altar which is flanked by two huts, smithies and brick­ kilns.

• There are five women, one of them holding a vessel and another worshipping with her folded hands.

• Flowers in water, buffalos on field, girl lifting water pot on her shoulder, trees, bulis, antelopes, and archers also can be seen. 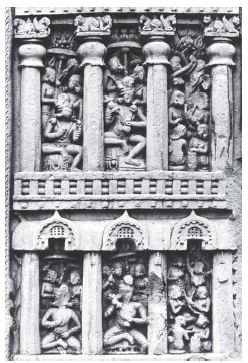 • The Fig. 4.33 depicts a king surrounded by his servants holding umbrella over his head and fanning.

• The figure shows urban scene because the rulers stayed in cities where many services and crafts were available to them.

8. Discuss the development in sculpture and architecture associated with the rise of Vaishnavism and Shaivism.

• The two cults emphasised on the worship of a chosen deity and personal devotion (bhakti) to it.

• Vaishnavism believed in ten avatars (incarnations) of Vishnu, forms that the deity was believed to have assumed in order to save the world from disorder and evil forces.

• Some of these forms were represented in sculptures, along with other deities.

• Shiva in Shaivism was symbolised by the linga, and occasionally represented in human form too.

• Sculptural representations of the main deities of these cults depict complex set of ideas about the deities and their attributes through symbols - headdresses, ornaments and ayudhas (weapons).

9. Discuss how and why stupas were built.

• Inscriptions found on the railings and pillars of stupas mention donations made for building and decorating them.

• Kings such as the Satavahanas made donations; guilds (such as the ivory workers) financed part of one of the gateways at Sanchi.

• Inscriptions record names, places and occupations of men and women who made donations.

•  Bhikkhus and bhikkhunis also contributed towards building these monuments.

•  Relics of the Buddha such as his bodily remains or objects used by him were buried in stupas (mounds).

• Stupas were regarded as sacred, and venerated as an emblem of both the Buddha and Buddhism.

•  According to the Ashokavadana, a Buddhist text, Asoka distributed portions of the Buddha's relics to every important town and ordered the construction of stupas over them.

Download past year Question Papers for Class 12 History as per CBSE NCERT KVS syllabus with solutions in pdf free
More..

Download Worksheets for Class 12 History made for all important topics and is available for free download in pdf, chapter wise assignments or booklet with...
More..