1. List the  items of food  available to people in Harappan cities. Identify the  groups who  would have  provided these.

• The Harappans ate varieties of plant  and animal products.

• They consumed  grains  and cereals such as rice, wheat, barley, lentil, chickpea, sesame and millets.

• The Harappans domesticated cattle, sheep, goat, buffalo  and pig for meat  and milk.

• They also ate meat  of wild animals  (boar, deer, and gharial), and also fish and fowl.

• While grains  and pulses  were  provided by farmers, we do not know  whether  the Harappans hunted  the wild animals  themselves or obtained  meat  from  other hunting communities.

2. How  do archaeologists trace socio-economic differences in Harappan society? What are  the differences that they notice?

(ii)  artefacts to trace socio-economic differences in the Harappan society.

•  At burials  in Harappan  sites, the dead were generally laid in pits.  Some of such pits  have bricks  lined in their  hollowed-out  spaces.

•  Archaeologists wonder  if this  difference in the pits can shed light  on the socio-economic differences.

• Some graves  also contain  pottery and ornaments, indicating a belief  in a life after  death.

• Ornaments such as shell rings, jasper  beads and other  micro-beads have been found  in burials  of both men and women.

• There are also pits  with  copper  mirrors.

• Thus, the type  of materials available in the pits  can tell  us the economic  differences among  the Harappans.

• The utilitarian objects  were made out of ordinary materials such as stone  or clay. These include querns, pottery, needles  and flesh-rubbers (body scrubbers). They are usually  found  distributed throughout settlements.

•  Luxuries  are rare  or made from  costly, non-local materials or with  complicated technologies (such as little  pots of faience).  Only wealthy  social groups could have used luxuries.

3. Would you agree that the  drainage system in Harappan cities indicates town planning? Give reasons for your  answer.

• Yes, the drainage system  in Harappan  cities  indicates town  planning. It was carefully planned  and constructed.

• Roads and streets were laid out along an approximate "grid" pattern, intersecting at right angles.

• It seems that  streets with  drains  were laid out first and then  houses built  along them.

• The underground drainage system  connected  all houses to the street  drains  which were covered  by stone  slabs or bricks.

4. List the  materials used to make beads in the Harappan civilisation. Describe the  process by which any  one  kind  of bead  was  made.

• Materials  used to make  beads in the Harappan civilisation were stones like carnelian, jasper, crystal, quartz  and steatite; metals  like copper, bronze and gold; and shell, faience  and terracotta (burnt clay).

• There were many  techniques for making  beads. For exampie, steatite, a very  soft stone, was easily worked.  Some beads were moulded  out of a paste made with  steatite powder.

• This technique permitted making  a variety of shapes, unlike  the geometrical forms  made out of harder stones.

• However, archaeologists are still not able to understand the technique used in the making  of the steatite micro  bead.

5. Look at  Fig. 1.30 and describe what you see. How  is the  body  placed? What are  the  objects placed  near  it? Are there any  artefacts on the  body? Do these indicate the  sex of the  skeleton?

• The Harappan burial  seems to be one of the  best preserved archaeological findings.

• The body  is placed in north-south direction, and its head is tilted towards  west.

•  Funerary  objects  (pedastaled vessels, mud  jars  and pots)  have been arranged around  the head, suggesting a belief  in life after  death.

• The body  is wearing  shell bangles  in its left  hand; it is a skeleton of a woman.

Write a short  essay  (about 500 words) on the following:

6. Describe some  of the  distinctive features of Mohenjodaro.

•  Settlements in Mohenjodaro were properly planned and implemented.

• They are divided  into  two sections-  the Citadel (smaller but higher  mud brick  platforms) and the Lower Town  (much  larger  but lower).

• The Citadel  buildings were walled  and physically separated  from  the Lower Town.

• The Lower Town was also walled, and several buildings were built  on platforms (elevated­ feundations).

•  Bricks (sun-dried and baked)  with  a standardised ratio  were used in all buildings.

• Once the  platforms were ready, all construction activities within  the city  were restricted to a fixed area on the platforms.

• The Lower Town has a properly planned  drainage system; it is one of distinctive features  of Mohenjoda ro.

•  Roads and streets were laid out along  an approximate "grid" pattern, intersecting at right angles.

• Many residential buildings in the  Lower Town are with  bathroom, courtyard (for  cooking  and weaving, and ventilation) and wells which could be accessed by passers-by from  outside  through a separate doorway.

7. List the  raw materials required for craft production in the  Harappan civilisation and discuss how  these might have  been  obtained.

•  Harappans procured raw materials for craft production by establishing settlements (such as Nageshwar  and Balakot)  in areas where  shell and blue stone  were available.

• They procured  lapis lazuli from  Shortughai (in Afghanistan), carnelian  from  Bharuch  (in Gujarat), steatite from  Rajasthan  and Gujarat, and metal  from Rajasthan.

• They also sent expeditions to procure  copper  from the  Khetri  region  of Rajasthan and gold from  south India. Harappans also established communication with  local communities.

• Recent archaeological finds  suggest  that  copper  was also probably brought from  Oman, on the southeastern tip of the Arabian  Peninsula.

8. Discuss  how  archaeologists reconstruct the  past.

•  Archaeologists reconstruct the pasts with  material evidence. They study  the remains  of buildings made of stone  and brick, paintings and sculpture.

• They also explore  and excavate  (dig  under  the surface  of the earth)  to find tools, weapons, pots, pans, ornaments and coins.

• They look for bones  - of animals, birds, and fish - to find out what  people  ate in the past.

•   For example, archaeologists have been able to reconstruct dietary practices  of the Harappan society from  finds  of charred  grains  and seeds.

•  Animal  bones found  at Harappan  sites include  those of cattle, sheep, goat, buffalo  and pig. Studies  done by archaeo-zoologists (or  zoo-archaeologists) indicate that  these animals  were domesticated.

9. Discuss  the  functions that may  have  been performed by rulers in Harappan society.

• Evidence shows that  complex decisions  were taken and implemented in the Harappan society.

•  Similarity and uniformity of Harappan  artefacts (pottery, seals, weights  and bricks)  from  Jammu  to Gujarat  suggest  a single  centre  of power.

• This evidence  is further strengthened by the strategically built  settlements in specific  locations  for various  reasons.

•  Archaeologists argue  that  building settlements required huge labour  for making bricks  and for the construction of massive  walls and platforms, and the labour  could have been obtained  only  by a single authority or ruler.

• However, archaeological records  proving such a centre  of power  or a group  of powerful people  is rare.  Even a palace-like large  building found at mohenjodaro does not reveal  any such single  ruler  in the Harappan city.

•  Archaeologists who discovered a stone statue labelled  it as the "priest-king", this is because they were familiar with  Mesopotamian "priest-kings" and have found  parallels in the Indus  region.

•  harappan  ritual practices  have not been well understood yet, and it is not clear whether those who performed them  also exercised  political power.

• Other hypotheses suggest  that  Ha ra ppa n society  had no rulers, and that  everybody enjoyed equal  status.

• There are also scholars  who argue  that  there  were many  rulers  ruling  Mohenjodaro and Harappan  cities separately. 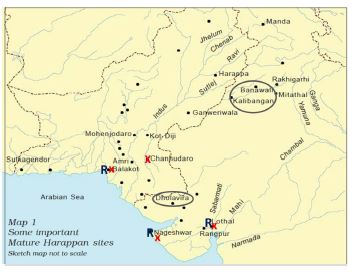 Download past year Question Papers for Class 12 History as per CBSE NCERT KVS syllabus with solutions in pdf free
More..

Download Worksheets for Class 12 History made for all important topics and is available for free download in pdf, chapter wise assignments or booklet with...
More..