Ans. According to Darwin, environment selects organisms with favourable variations and these organisms are allowed to survive. When a bacterial population encounters a particular antibiotic, those sensitive to it die. But some bacteria having mutations become resistant to the antibiotic. Such resistant bacteria survive and multiply quickly as the competing bacteria have died. Some the resistance providing genes become widespread and entire bacterial population becomes resistant.

2.Find out from newspapers and popular science articles any new fossil discoveries or controversies about evolution.

Ans. Chimps are more evolved than humans (The Times of India): Chimpanzees are more evolved than humans, a study suggests. There is no doubt that humans are the more advanced species. But a comparison of 14,000 human and chimpanzee genes shows the forces of natural selection have and the greatest impact on our ape cousins.The researchers’ discovery challenges the common assumption that our large brains and high intelligence were the gifts of natural selection. Humans and chimps followed different evolutionary paths from a common ape ancestor about 5 million years ago. Both underwent changes as the fittest survived to pass their genes on to future generations. But the US study shows that humans possess a ‘substantially smaller’ number of positively-selected genes than chimps.

3. Attempt giving a clear definition of the term species.

Ans. Species is population or group of individuals that have potential of interbreeding and are able to produce viable, fertile young ones but are reproductively isolated from members of other species. 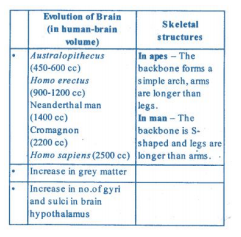 Download Class 12 Biology assignments. Practice tests for Class 12 for Biology has been made for all important topics in NCERT book and is available...
More..

Download Class 12 Biology assignments. Practice tests for Class 12 for Biology has been made for all important topics in NCERT book and is available...
More..