1. Answer the following questions in about 30 words:

(i) What are topographical maps?

Answer: Topographic maps are detailed, accurate graphic representations of cultural and physical features that appear on the Earth's surface.

(ii) Name the organisation, which prepares the topographical maps of India.

Answer: The Survey of India prepares the topographical maps in India for the entire country.

(iii) Which are the commonly used scales for mapping our country used by the Survey of India?

(iv) What are contours?

Answer: Imaginary lines joining all the points of equal elevation or altitude above mean sea level are called contours. They are also called “level lines”.

(v) What does the spacing of contours indicate?

Answer: The spacing of contours indicates the slope.

(vi) What are conventional signs?

Answer: Conventional signs and symbols represent various features shown on a map, but these are not drawn to scale.

Answer: Marginal information is the peripheral information on the edge of the map that provides useful information about the map to the user. It includes representative fraction, the bar scale, contour interval, lists the producer, dates of preparation and topographic symbols, etc., used to represent some of the prominent features on the map.

(iii) The Survey of India

Answer: The Survey of India is India's central engineering agency incharge of mapping and surveying. It is one of the oldest Engineering Departments of the Government of India. Survey of India publishes maps. The survey of India prepares and publishes the topographical maps for India as per the specifications laid down for the International Map Series of the World.

Answer: Map interpretation involves the study of factors that explain the causal relationship among several cultural and natural features shown on the map. For example, the distribution of urban and rural settlements can be examined in association with the levels of transport and communication network and the nature of topography.

The following steps will help in map interpretation:

 Number of the topographical sheet give an idea about the location of the area in India and general characteristics of the major and minor physiographic divisions of the area.

4. If you are interpreting the cultural features from a topographical sheet, what information would you like to seek and how would you derive this information? Discuss with the help of suitable examples.

The nature and causes of various settlement patterns (Compact, Scattered, Linear, and Circular) may be clearly understood by comparing the settlement map with the contour map. Density of settlement is related to food and water supply. Relief, distribution of population, and resource development pattern of an area influence the pattern and density of transport and communication and are depicted through conventional signs and symbols.

5. Draw the conventional signs and symbols for the following features— 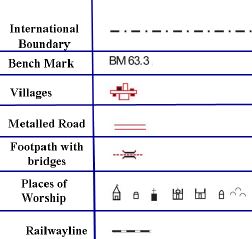 Study the contour pattern and answer the following questions. 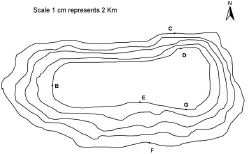 Answer: The contour lines representing a plateau because these are close spaced at the margins with the innermost contour showing wide gap between its two sides

2. Find out the contour interval in the ma

3. Find out the map distance between E and F and convert it into ground distance.

Answer: The map distance between E and F is 2 cm, and the ground distance is 4 km.

 Slope between A and B is gentle

 Slope between C and D is irregular

 Slope between E and F is gentle

5. Find out the direction of E, D and F from Answer:

 From G the direction of E is north-east

 From G the direction of D is North

 From G the direction of F is south

Study the extract from the topographical sheet No. 63K/12, as shown in the figure below and answer the following questions—

2. Name the major settlements of the area.
Answer: Mirzapur and Varanasi

3. What is the direction of flow of the river Ganga?
Answer: Ganga flows in the south-east direction

Study the extract for topographical sheet 63K/12 shown in the figure below and answer the following questions.

2. River Jamtihwa Nadi is flowing through which quarter of the map?

3. Which is the major settlement located in the east of the Kuardari Nala?

Answer: Kotwa is located in the east of the Kuardari Nala.

4. What type of settlement does the area have?

Answer: There are scattered settlements.

5. Name the geographical feature represented by white patches in the middle of Sipu Nadi.

6. Name the two types of vegetation shown on part of the topographical sheet.

7. What is the direction of the flow of the Kuardari?

8. In which part of the sheet area is Lower Khajuri Dam located?

Answer: Khajuri Dam is located in the north