1. Notice these expressions in the text. Infer their meaning from the context.

remove: a division in a school

got carried away: got very excited or lost control of one’s feelings due to strong emotions.

cut: go away without permission

sadist: a person who gets pleasure out of inflicting pain to others

shriveled up: having no feelings

1. Comment on the attitude shown by Taplow towards Crocker-Harris.

Mr. Crocker Harris seems to be a strict disciplinarian. At the same time he is a hard working teacher and fully devoted to his duty. This is very evident from the incident that he calls Taplow even on the last day of school to make up for his missed class.  Taplow does not appreciate the teacher much, but he tells Frank that in spite of everything, he likes him.

In his opinion Crocker is hardly human but he is not sadist, as he has no feelings at all. He is indifferent to the feelings shown by his students. He also feels that Crocker is a teacher who cannot appreciate the extra work done by the students. He is like a nut and he seems to hate people who like him. He is not partial nor biased. He also maintains an appropriate distance from his students. He is a teacher who a student can never disobey. Therefore, Taplow feels scared to escape meeting him and waits for him even when Crocker is late. He is respectful towards Crocker and dares not cut the extra work even after Millie Crocker-Harris suggests him to do that.

2. Does Frank seem to encourage Taplow's comments on Crocker-Harris?

No, Frank does not encourage Taplow’s comments on Mr. Crocker-Harris. He cleverly asks Taplow several questions that he wants to have an insight of what students think of his colleague. Frank is understanding towards his students and thus, students open up to him quiet easily. He does not appreciate sarcasms on a fellow teacher hence, he points out to Taplow that he got too far in mocking his teacher.

3. What do you gather about Crocker-Harris from the play?

Mr. Crocker Harris is a strict disciplinarian who doesn’t compromise on the rules and regulations to satisfy the sentiments of students. He is a hard working teacher and is fully devoted to his duty. He is neither partial nor biased and he tries to maintain an appropriate distance from his students. He is different from young teachers and is grounded to his ideals.  His students respect him out of fear.  No student in his entire career has the courage to 'cut' Mr. Crocker Harris. He is strict with students when it comes to studies but he is not a sadist. His jokes are classical and elite but poor for students as not a single student is able to understand them.

Talking about the Text

Reading plays is a source of entertainment and enjoyment, hence it is hence it is more interesting than studying science.  It makes us imaginative and provides us more ideas about life. It also helps one to develop a critical aptitude which is helpful in our daily life and its problems. Science is all about matter and facts. Learning them is considered as boring whereas reading plays is more fascinating. While reading plays, one also gets to learn about human nature, its vices and virtues which is more interesting than observing the substances and materials.

1. A sadist is a person who gets pleasure out of giving pain to others.

Given below are some dictionary definitions of certain kinds of persons.

Find out the words that fit these descriptions.

1. A person who considers it very important that things should be correct or genuine e.g. in the use of language or in the arts: P...

2. A person who believes that war and violence are wrong and will not fight in a war: P...

3. A person who believes that nothing really exists: N...

4. A person who is always hopeful and expects the best in all things: 0...

5. A person who follows generally accepted norms of behavior: C...

6. A person who believes that material possessions are all that matter in life: M...

The chapter-wise exercise questions with solutions will help you to complete your classwork, revise important concepts and get higher marks in Class 11 school tests and exams. Get chapter wise solutions.
Download Class 11 all subjects NCERT Solutions in pdf free. All questions have been solved in a step by step manner to give a better understanding of key concepts of all subjects in NCERT Class 11.

The solutions provided here cover all exercises given at the end of the chapter all subjects. Please click on the links below and free download the pdf for solutions for the Class 11 NCERT chapter all subjects.
Solve all NCERT questions given in which will help in giving advantage and prepare them better for class tests and CBSE exams.

These solved questions also cover It covers all important theorems, formulas and detailed explanations for all subjects which will help to build stronger conceptual understanding in students. 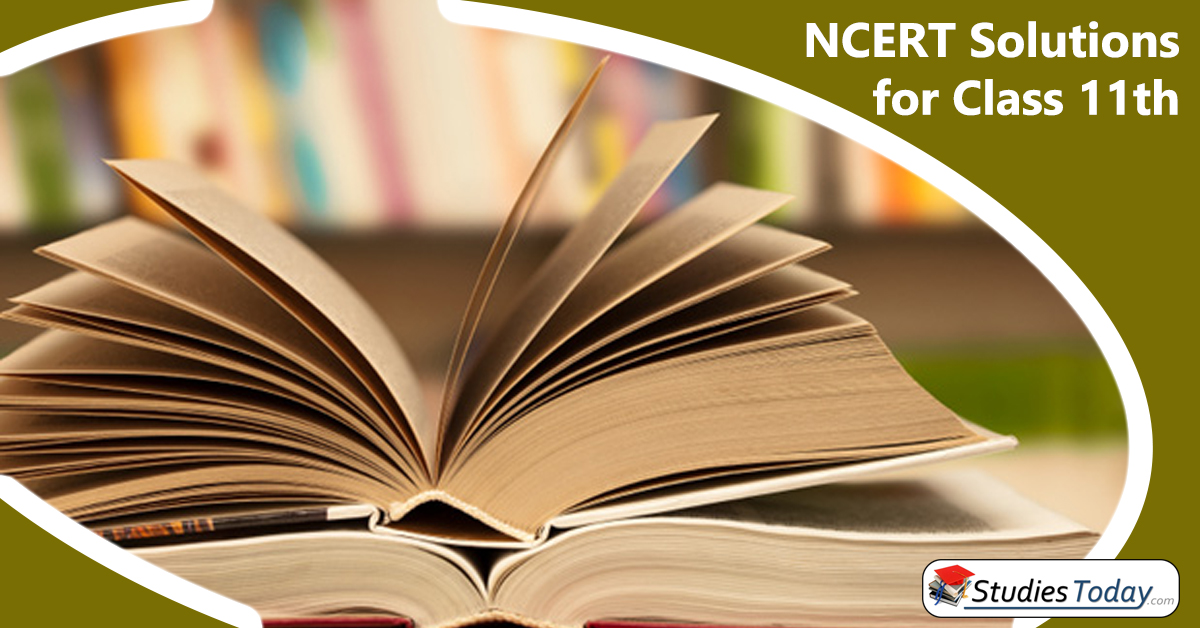 Class 11 Maths, Physics, Chemistry, Biology, English, Business Studies and Economics NCERT textbook solutions are given below.
This syllabus can be downloaded from our website in a free PDF format. If you’re preparing for entrance exams such as NEET or JEE Mains, the fundamentals of class 11 play a vital role.
NCERT Books solutions are the preferred method generated in keeping with the syllabus and it helps you to answer wise questions in class 11. So what are you waiting for, download the solutions of class 11 and start preparing now.

Class 11 Maths, Physics, Chemistry, Biology, English, Business Studies and Economics NCERT textbook solutions are given below. This syllabus can be downloaded from our website in a free PDF format. If you’re preparing for entrance exams such as NEET or JEE Mains, the fundamentals of class 11 play a vital role. NCERT Books solutions are the preferred method generated in keeping with the syllabus and it helps you to answer wise questions in class 11. So what are you waiting for, download the solutions of class 11 and start preparing now.

Free Unseen Passage, Comprehensions and passages with questions and answers and other study material for Class 11 English as per CBSE and NCERT syllabus....
More..

During the COVID-19, humanity has faced various situations that invoke human interest. There are stories of innovation, sacrifice, going beyond the call of duty, challenges faced and creatively solved, humour, finding joy in adversity etc. It will be highly useful to...

Board Exams Datesheet Class 10 and Class 12