1.What are macromolecules? Give examples.

Answer: A macromolecule is a very large molecule of relatively high molecular weight (of more than one thousand daltons) which is created by polymerization of smaller subunits, called monomers. Example: Proteins, nucleic acids, carbohydrates. Large lipids molecules are though non-polymeric, but they come under the category of macromolecules.

2.Illustrate a glycosidic bond, peptide and a phospho-diester bond.

Peptide bond: The covalent bond between two neighbouring amino acids in a protein molecule, formed due to a condensation reaction between the carboxyl group of one and the amino group of another is known as peptide bond.

Phospho-diester bond: The covalent diester bond between phosphoric acid and two sugar molecules linking two nucleotides together to form the backbone of DNA and RNA is known as phosphor- diester bond. It exists between the phosphate of one nucleotide and the sugar 3' carbon of the next nucleotide. 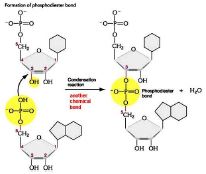 3.What is meant by tertiary structure of proteins?

Answer: The tertiary structure of a protein is the actual shape of the protein molecule. It describes the structure of the complex and irregular folding of the peptide chain in three dimensions. It depicts the way alpha helices and beta sheets are arranged depending upon the particular amino acids in the primary structure. These complex structures are held together by a combination of several molecular interactions (like hydrogen bond, ionic bond, covalent bond, hydrophobic interactions between R groups) that involve the R-groups of each amino acid in the primary chain. The tertiary structure of the protein is important for the biological activity of the protein.

4.Find and write down structures of 10 interesting small molecular weight biomolecules. Find if there is any industry which manufactures the compounds by isolation. Find out who are the buyers. 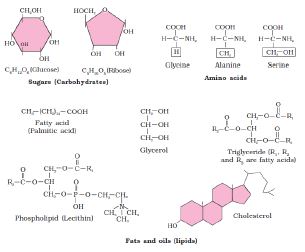 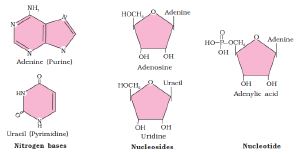 Research laboratories, educational institutes and other industries use biomolecules as precursors for making other products.

5.Proteins have primary structure. If you are given a method to know which amino acid is at either of the two termini (ends) of a protein, can you connect this information to purity or homogeneity of protein?

6.Find out and make a list of proteins used as therapeutic agents. Find other applications of proteins (e.g. Cosmetics etc.)

Other applications of Proteins:

 Amylases are used in detergents to remove starch based stains

 Cellulases are used in detergents.

7.Explain the composition of triglycerides.

Answer: A triglyceride is an ester derived from condensation reaction of one glycerol molecule and three fatty acids. The glycerol is an alcohol with three hydroxyl (OH-) groups. Each fatty acid has carboxyl group (COOH-). In the triglyceride molecule, hydroxyl groups of the glycerol join the carboxyl groups of the fatty acid to form the ester bond. They are also referred to as neutral fats because unlike their component parts, they lack polar groups that can bond hydrogen with water. The hydrocarbon chain of the fatty acid in a triglyceride can be saturated or unsaturated depending upon the presence or absence of double bonds between carbon atoms. Triglyceride like butter which is solid at room temperature contains saturated fatty acid whereas oil contains unsaturated fatty acids and thus remains in liquid state at all temperatures.

8.Can you describe what happens when milk is converted into curd or yogurt from your understanding of proteins.

Answer: The main protein in dairy milk is caseins which contains all the essential amino acids. Caseins are composed of several similar proteins which form a multi-molecular, granular structure called a casein micelle. The casein micelle also contains water and salts. The individual casein molecules are not very soluble in the aqueous environment of milk however the casein micelle granules are maintained as a colloidal suspension in milk. Bacteria found in the milk or when added externally, ferment the sugar lactose into lactic acid. This fermentation results in acidic environment causing micellar structure to break and the casein comes out of solution or coagulates. The resulting gelatinous material with creamy texture is known as yogurt or curd.

Ball and Stick models are made to represent the three dimensional structure of a chemical compound showing the position of atoms and the bonds in the 3-D space. The round balls of different colours are used to represent various atoms with sticks as bonds between these atoms. The angle and the distance between the atoms in the model are proportional to the actual molecule/compound.

10. Draw the structure of the amino acid, alanin

Answer: The structure of the amino acid alanine:

11. What are gums made of? Is Fevicol different?

Answer: Gums are hetero- polysaccharide substances made up of 2 or more kinds of monosaccharide units. Fevicol is a branded synthetic product with excellent adhesive properties. It is made up of polyvinyl alcohol (PVA) glue, not polysaccharide. There are several variations available.

12. Find out a qualitative test for proteins, fats and oils, amino acids and test any fruit juice, saliva, sweat and urine for them

a. Proteins: Biuret Test (It is used to determine the presence of peptide bonds in protein. In the presence of peptide bond, a purple coloured compound is formed.)
b. Fats and Oils: Grease spot test/Brown paper test (lipids leave translucent spots (grease spots) on unglazed brown paper bags) OR Sudan Red test (Sudan red is a fat-soluble dye that stains lipids red).
c. Amino acids: Ninhydrin Test (Ninhydrin is used to detect amino acids. When about 0.5 mL of a 0.1% solution of Ninhydrin is boiled for one or two minutes with a few mL of dilute amino acid or protein solution, a blue colour develops indicating presence of amino acids).

13. Find out how much cellulose is made by all the plants in the biosphere and compare it with how much of paper is manufactured by man and hence what is the consumption of plant material by man annually. What a loss of vegetation!!

Answer: Cellulose is a complex carbohydrate that consists of 3,000 or more glucose units. It forms the basic structural component of plant cell walls. Cellulose comprises about 33 percent of all vegetable matter (90 percent of cotton and 50 percent of wood are cellulose) and is the most abundant of all naturally occurring organic compounds. Cellulose is found in the cell walls of secondary xylem and it is the ultimate source of production of paper. Paper is nothing but 90% secondary xylem or wood. The remaining 10% comes from the fibres of rages, straw, grass or old newspapers. According to a report, each person in the United States uses about 749 pounds of paper every year and almost 4 billion trees are cut down each year for production of paper.The world uses 400 percent more paper now than it did 40 years ago. Used paper and paper products make up the largest portion of our trash - about 40 percent! This is indeed a huge loss of vegetation.

14. Describe the important properties of enzym

Answer: The important properties of enzymes:

 All enzymes are proteins. Some nucleic acids also behave like enzymes.

 All enzymes have a primary structure determined by the amino acid sequence followed by secondary and tertiary structure.

 They reduce the activation energy required for the reaction to occur and thereby fasten the process manyfolds.

 Specificity: Each enzyme catalyzes a very specific chemical reaction and are also known as biocatalysts. The folding of the protein backbone gives rise to an active site of the enzyme where the substrate for the enzyme fits and undergoes modification resulting in product formation. This is explained by lock and key mechanism. Enzymes remain unchanged after the chemical reaction.

 Denaturation: Since enzymes are proteins, they get denatured at higher temperatures and thereby lose their ability to function.

 Regulation: Enzyme activity is regulated in the cell depending upon the metabolic necessity.

 Enzyme is affected by pH and temperature of the solution. They work best under optimum pH.

Download Class 11 Biology assignments. Practice tests for Class 11 for Biology has been made for all important topics in NCERT book and is available...
More..

Download Class 11 Biology assignments. Practice tests for Class 11 for Biology has been made for all important topics in NCERT book and is available...
More..

Access CBSE Class 11 Biology MCQs for MCQs for important topics for all chapters in MCQs based on CBSE and NCERT pattern. Access full database of...
More..

Access latest Printable Worksheets, test papers for Class 11 Biology with questions answers for all topics and chapters as per CBSE (NCERT) sylabus....
More..