1. State the location and function of different types of merist

Answer: Depending on the location in plants,

2. Cork cambium forms tissues that form the cor Do you agree with this statement? Explain.

Answer: Cork cambium forms tissues that form the cork. During the secondary growth, the plant increases its girth due to the activity of vascular cambium. This results in rupturing of the outer cortical and epidermal layer. To protect the internal tissues from the external environmental exposure, another meristematic tissue called cork cambium develops in this region. This is a couple of layers thick and is made up of rectangular thin walled cell. The outer cells divide to form cork and cells of the inner layer form secondary cork cambium.

3. Explain the process of secondary growth in the stems of woody angiosperms with the help of schematic diagram What is its significance?

Answer: In the stems of woody angiosperms, a meristematic layer called intrafascicular cambium is present between the primary xylem and phloem.

During the growing season, the cells of medullary rays, adjoining the intrafascicular cambium become meristematic and form a continuous ring that divides bidirectionally. The cell that cuts off towards the pith becomes secondary xylem, while the cell that cut outwardly form secondary phloem. The activity on cambial ring is high inwardly, resulting in production of more secondary xylem, compare to secondary phloem. This results in formation of compact mass at the center of the stem 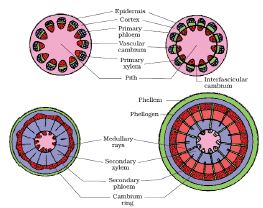 Significance: Many physiological and environmental factors govern the activity of intrafascicular cambium. This can be distinctly observed in woody trees of temperate regions. They have clearly demarcated annual rings which are concentric rings formed due to formation of two different kinds of woods during two different seasons. In the spring, cambium is active and produces large number of xylary elements having vessels with wider cavities. This wood is called spring wood and is lighter in colour with lower density. During winter season, cambium is less active and forms fewer xylary elements that have narrow vessels. This late wood or autumn wood is darker in colour and has higher density. This difference in the woods formed during two different seasons results in formation of annual rings. One can find out the age of the plant based on the number of annual rings seens in the cut stem of the plant.

4. Draw illustrations to bring out the anatomical difference between

(a) Monocot root and Dicot root

(b) Monocot stem and Dicot stem 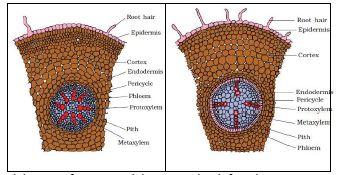 5. Cut a transverse section of young stem of a plant from your school garden and observe it under the microsco How would you ascertain whether it is a monocot stem or a dicot stem? Give reasons.

6. The transverse section of a plant material shows the following anatomical features - (a) the vascular bundles are conjoint, scattered and surrounded by a sclerenchymatous bundle sheaths. (b) phloem parenchyma is absent. What will you identify it as?

Answer: A scattered vascular bundle surrounded by bundle sheaths where phloem parenchyma is absent is the feature of monocot stem.

7. Why are xylem and phloem called complex tissues?

Phloem: The phloem consists of following types of cells:

8. What is stomatal apparatus? Explain the structure of stomata with a labelled diagram

Answer: The stomatal pore, guard cell, the subsidiary and epidermal cell are all together known as stomatal apparatus. Stomata is a special opening present in the epidermis of the leaves to facilitate the gaseous exchange and the process of transpiration. Stomata is composed of two kidney shaped (bean shaped) guard cells, which regulate the opening and closing of stomatal pore. The cell wall of guard cells shows differential thickening. The outer wall is elastic and thin while the inner wall close to pore is highly thick. These guard cells are photosynthetic in nature and the turgidity of guard cells regulates the opening and closing of stomata. The guard cells are surrounded by specialized cells called subsidiary cells having specific shape and size.

9. Name the three basic tissue systems in the flowering plant Give the tissue names under each system.

Answer: The three basic tissue systems in the flowering plants are as follows:

10. How is the study of plant anatomy useful to us?

Answer: Study of plant anatomy is useful in the following ways:

 Classification: On the basis of anatomical features a plant can be differentiated into monocot, dicot or gymnosperm, angiosperm.

 Adaptation: It reveals about the various modifications in the internal organization of tissue with respect to different environmental conditions, thus helps in studying evolution.

11. What is periderm? How does periderm formation take place in the dicot stems?

Answer: During secondary growth, the plant increases its girth due to the activity of vascular cambium. This results in rupturing of the outer cortical and epidermal layer. To protect the internal tissue from the external environmental exposure, the meristematic tissue develops at this region, called cork cambium or phellogen. This meristematic tissue possess rectangular thin walled cell, which divides outwardly to form cork or phellem and inward to form secondary cork cambium phelloderm. These tissues, namely phellogen, phellem and phelloderm are collectively called periderm. Periderm formation in dicot stem takes place from the meristematic tissue of cortex region.

12. Describe the internal structure of a dorsiventral leaf with the help of labelled diagrams.

Answer: The dicot leaves differs in the structure and appearance of its upper and lower surfaces, thus they are called dorsiventral leaves. The vertical section of a dorsiventral leaves under microscope can be clearly distinguished into three parts. They are:

 Vascular system: These include densely arranged complex tissues that include xylem and phloem. 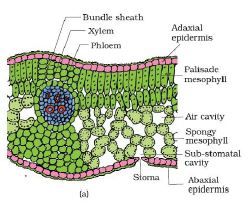