1. What is the basis of classification of algae? Answer: The algal classification into three different groups is based on the following characteristics:

[Note: The algae are divided into three main classes: Chlorophyceae, Phaeophyceae and Rhodophyceae.]

2. When and where does reduction division take place in the life cycle of a liverwort, a moss, a fern, a gymnosperm and an angiosperm?

Answer: Reduction division is a type of cell division in which the chromosome number is reduced to half in the process of forming gametes/ spores for sexual reproduction. It is also called as meiosis.

Liverwort: In liverworts, the main plant-body is haploid (gametophytic). It bears the male and female sex organs which produce gametes. These gametes fuse to form a zygote. The zygote develops on the gametophytic plant-body to form a sporophyte. The sporophyte is differentiated into the foot, seta, and capsule. Reduction division takes place inside the capsule to form haploid spores.

Moss: In mosses, the gametophytic primary protonema develops into the secondary protonema which bears the sex organs which produce gametes. These gametes fuse to form a zygote. The zygote develops into a sporophyte. Reduction division in the capsule leads to haploid spore formation.

Fern: In ferns, the main plant-body is sporophytic. Its leaves are known as sporophylls and these bear the sporangia. Reduction division takes place in these sporangia, thereby producing many spores.

Angiosperm: In angiosperms, the main plant-body is sporophytic and bears flowers. The male sex organ in the flower is the stamen, while the female sex organ is the pistil and both are present in the flower. Reduction division takes place in the anthers of the stamen (producing haploid pollen grains) and in the ovary of the pistil (producing haploid eggs).

3. Name three groups of plants that bear archegoni Briefly describe the life cycle of any one of them.

Answer: Archegonia is a female sex organ that produces female gametes. The three groups that show distinct archegonia are:

Life cycle of a liverwort, a bryophyte: 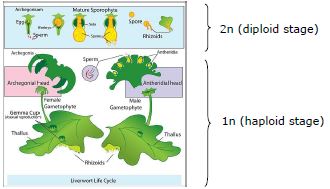 The life of a liverwort starts from the germination of a haploid spore to produce a protonema, which is either a mass of thread-like filaments or else a flattened thallus.The protonema is a transitory stage in the life of a liverwort, from which will grow the mature gametophore plant that produces the sex organs. The male organs are known as antheridia and produce the sperm cells. The female organs are known as archegonia. Each archegonium has a slender hollow tube down which the sperm swims to reach the egg cell. When sperm reach the archegonia, fertilisation occurs, leading to the production of a diploid sporophyte. After fertilisation, the immature sporophyte within the archegonium develops three distinct regions a foot, capsule and a seta. When the sporophyte has developed the archegonium ruptures to release the haploid spores by meiosis/ reduction division. The haploid spores will germinate and the life cycle will start again.

5. Write a note on economic importance of algae and gymnosperms.

a. Algae as food – Algae species are used as food and are found to be rich in proteins, vitamins (A, B, C and E), lipids and minerals. Laminaria species is an edible seaweed in Japan.
b. Algae as fodder for cattle - Algae is also used as food for cattle for example spirulina.
c. Algae as fertilizers - Blue-green algae are treated as bio-fertilizer Nostoc, Oscillatoria, Scytonema, Spirulina, etc. are used as fertilizers in rice fields. All these algae help to fix atmospheric Nitrogen in the ground.
d. Agar-Agar: Agar-agar is a jelly like substance of great economic value. It is obtained from certain red algae. Agar is used as a culture medium for growing callus in tissue culture as well as in confectionaries.
e. Antibiotics and Medicines: Antibiotic Chlorellin, obtained from Chlorella is effective against a number of pathogenic bacteri Seaweeds have beneficial effect on gall bladders, pancreas, kidneys, uterus and thyroid glands.

a. Gymnosperms like pine, fir, spruce, and cedar are conifers that are used for lumber. The wood is used in packaging industries and also for making home furnishing.
b. Ornamental use of gymnosperms like for making bonsai and for Christmas decorations.
c. Resins of coniferous trees are used to make turpentine oil, wood methanol, disinfectants, paints perfumes

6. Both gymnosperms and angiosperms bear seeds, then why are they classified separately?

Answer: Both gymnosperms and angiosperms bear seeds but they are classified separately due to the following differences between the two groups:

Figure: Difference between the gymnosperm and angiosperm seeds.

7. What is heterospory? Briefly comment on its significanc Give two examples?

Examples: Genera like Selginella and Salvinia are heterosporous and produce macro and micro spores.

(i) Protonema: Protonema is the first stage in the life cycle of a moss. The protonema develops directly

from a spore. The protonema is a mass of thread-like filaments or a flattened thallus.The protonema is a transitory stage in the life of a liverwort, from which will grow the mature gametophore plant that produces the sex organs.

(ii) Antheridium: The male sex organs in bryophytes are called antheridium. They produce biflagellate antherozoids which swim up the archegonium to fertilize the female gametes to form zygote.

(iii)Archegonium: The female organ known as archegonia is flask shaped and produces a single egg. The antherozoids (male gametes) are released into water where they come in contact with archegonium. Each archegoniumhas a slender hollow tube inwhich the sperm swims to reach the egg cell. An antherozoid fuses with the egg to produce the zygote.

(iv)Diplontic: A diplontic organism is one in which the somatic cells are diploid (having two sets of chromosomes) while its gametes are haploid (having one set of chromosomes). The diploid part is the dominant, photosynthetic, independent phase of the plant. This kind of lifecycle is termed as diplontic. All seed-bearing plants i.e. gymnosperms and angiosperms, follow this pattern.

(v) Sporophyll: Sporophyll is a leaf that bears spores/ sporangia. In heterosporous plants, the sporophylls can bear either microsporangia (megasporophylls) or megasporangia (microsporophylls). Examples of plants that have sporophylls are ferns, and some types of algae. In some cases sporophylls may form distinct compact structures called strobili or cones (eg. Selaginella, Equisetum).

(vi)Isogamy: Isogamy is a form of sexual reproduction that involves gametes of similar morphology (similar shape and size), differing only in allele expression in one or more mating-type regions. Because both gametes look alike, they cannot be classified as "male" or "female." Instead, organisms undergoing isogamy are said to have different mating types, most commonly noted as "+" and "-" strains, example Chlamydomonas and other plants.

9. Differentiate between the following:-

(i) red algae and brown algae

10. How would you distinguish monocots from dicots?

Answer: Monocots and dicots are the two classes of angiosperms. They can be distinguished by both anatomical and morphological characteristics. Some of the key features that can help distinguish the two are stated below:

11. Match the followings (column I with column II)

Column I Column II (a) Chlamydomonas (i) Moss

12. Describe the important characteristics of gymnosperm

c)They have tap roots and many plants have roots with fungal association in the form of mycorrhiza. Some plant roots are also associated with N2 fixing bacteria.