(a) Respiration and Combustion

(b) Glycolysis and Krebs’ cycle

Answer: The complex organic compound that gets oxidized in the cell during respiration to release large amounts of energy is called respiratory substrate. Under normal condition, glucose is the most common respiratory substrate which is a carbohydrate with six carbon atoms.

3. Give the schematic representation of glycolysis? 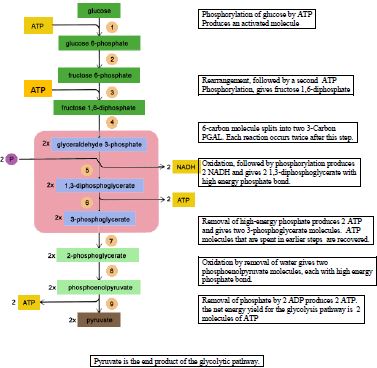 4. What are the main steps in aerobic respiration? Where does it take place?

Answer: The four main steps of aerobic respiration are as follows:

5. Give the schematic representation of an overall view of Krebs’ cycle. 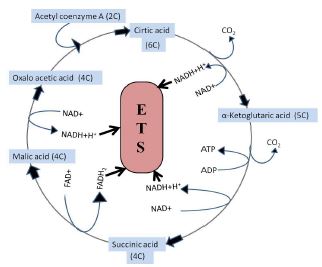 Answer: The electrons removed from the substrates of glycolysis and the Krebs’ cycle are stored in the reduction equivalents, namely NADH2 and FADH2. This energy is released when NADH2 and FADH2 are oxidized by passing their electrons to a chain of electrons carrier complex called Electron transport system, present in the inner membrane of mitochondria. These complexes transfer the electron through a series of redox reactions with high energy electrons entering the system and low-energy electrons leaving the system. The energy released through this process is utilized to pump out protons which develop a proton gradient (Proton motive force) across the inner membrane. This proton motive force is utilized by ATP synthase to generate high energy ATP molecules at 3 different sites.

Process: The NADH2 produced during citric acid cycle are oxidized by an NADH dehydrogenase (complex I), and electrons are then transferred to ubiquinone which get reduced. Ubiquinone also receives reducing equivalents via FADH2 (complex II). The reduced ubiquinone (ubiquinol) is then re-oxidized by transferring its electrons to cytochrome c via cytochrome bc1 complex (complex III). The electron is transferred from complex III to complex IV through cytochrome C which is a mobile carrier present in the inner membrane. Complex IV is called cytochrome C oxidase complex and consists of cytochromes a-a3, and two copper centers. 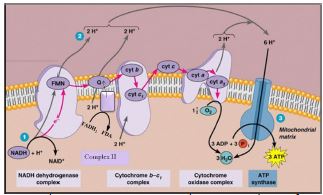 Figure: Electron transport system in the inner membrane of mitochondria

7. Distinguish between the following:

(b) Glycolysis and Fermentation

8. What are the assumptions made during the calculation of net gain of ATP?

Answer: Many assumptions have been made in order to calculate the net gain of ATP from one molecule of glucose. This is required as the cellular system is very complex where numerous biochemical reactions take place simultaneously. The assumptions are as follows:

1. All the steps of aerobic respiration (glycolysis, TCA cycle, ETS and oxidative phosphorylation) take place in sequential order where the product of first step enters the subsequent step as a substrate
2. The NADH synthesized in glycolysis enters in the mitochondria and produce ATP through oxidative phosphorylatio
3. The intermediates formed in various steps of aerobic respiration are not utilized in any other metabolic pathways other than subsequent steps of respirat
4.Glucose molecule is the only substrate and no other molecule enters as an intermediate substrate in the process.

9. Discuss “The respiratory pathway is an amphibolic pathway.”

Answer: The process of metabolism involves both anabolic and catabolic reactions. Anabolism is the synthesis of complex macromolecules like lipids and proteins from simple molecules like glycerol and amino acid, respectively. On the other hand, catabolism includes breakdown of macromolecules into simple molecules so that they can enter in the respiratory pathway as a substrate for the release of energy. If fatty acids are used as a respiratory substrate they are broken down to glycerol and acetyl CoA. Glycerol gets converted to 3-phosphoglyceraldehyde (PGAL) and enters in glycolysis while Acetyl CoA directly enters in Krebs’ cycle. However, when organism needs to synthesize fatty acids, acetyl CoA is withdrawn from the above said pathway and is made available for catabolic reaction. Similarly, when proteins are used as a substrate, they are first broken down to amino acid, which in turn, depending on their structure, gets converted into different intermediates of Krebs’ cycle.

At the time of need, the same molecules are withdrawn to synthesize new proteins. Most of these reactions are reversible, and depending on the requirement, the cell uses the respiratory substrate in the process of anabolism or catabolism. Thus, the respiratory pathway is known as amphibolic pathway rather than only a catabolic pathway.

10. Define R What is its value for fats?

For example, during aerobic respiration of one molecule of glucose, 6 molecules of CO2 are released and 6 molecules of O2 are consumed. Thus, RQ for glucose is 1.

RQ value for fats: Fats need more oxygen molecules than carbohydrate (glucose) for complete oxidation through aerobic respiration, due to which the value of RQ for fat is always less than 1.

For example, when fatty acid tripalmitin is used as a substrate, 145 molecules of O2 are consumed whereas 102 molecules of CO2 are produced, the RQ value is 0.7.

11. What is oxidative phosphorylation?

Answer: The metabolic pathway that uses energy released by the oxidation of nutrients to produce adenosine triphosphate (ATP) is called oxidative phosphorylation. Almost all the forms of life on earth use a range of different nutrients to carry out oxidative phosphorylation to produce the molecule that supplies energy to metabolism e. ATP. This is a very efficient process of energy generation. This process requires the presence of oxygen in the system. Oxygen drives the whole process as it removes hydrogen from the system and acts as the final hydrogen acceptor. During oxidative phosphorylation, electrons are transferred from electron donors like NADH2 to electron acceptors such as oxygen. These redox reactions release energy, which is used to form ATP. In eukaryotes, these redox reactions are carried out by a series of protein complexes within mitochondria, whereas, in prokaryotes, these proteins are located in the cell’s inner membranes. These linked sets of proteins are called electron transport chains. It is the energy of oxidation-reduction process that is used for the production of proton gradient required for phosphorylation and thus, this process is called oxidative phosphorylation.

12. What is the significance of step-wise release of energy in respiration?

Answer: Carbohydrates, proteins, fats and even organic acids are used as respiratory substrates and oxidation of these compounds releases energy in the cell. However, the energy released is not dissipated freely in the cell or does not occur in one step. Instead, it is released in a series of slow step-wise reactions controlled by enzymes and is trapped in the form of ATP. This holds lots of significance as the ATP which stores the energy can be broken down whenever and wherever energy needs to be utilized in the various energy-requiring processes of the organisms.