1. By looking at a plant externally can you tell whether a plant is C3 or C4? Why and how?

Answer: No, one cannot tell whether a plant is C3 or C4 by looking at only external features. There is no morphological difference between leaves of C3 and C4 plants, so it is almost impossible to differentiate these plants just by external investigation. C4 plant can be differentiated from C3 plant by anatomical examination only. The vascular bundle of C4 plants are surrounded by large cells called bundle sheath cells. Such structure found especially in C4 plants is called ‘Kranz anatomy’. Thus the study of vertical section of leaves under compound microscope is necessary to differentiate C3 plants from C4 plants.

2. By looking at which internal structure of a plant can you tell whether a plant isC3 or C4? Explai

Answer :The major anatomical difference between C3 and C4 plant is the Kranz anatomy (Kranz is a German word for “wreath”). The leaves of C4 plant show presence of Kranz anatomy, which is absent in C3 plants. Generally, the cross sections of C3 leaves under microscope shows only one type of cells that contains chloroplast .These are loosely arranged and are called mesophyll cells. But in case of C4 plants, apart from loosely arranged mesophyll cells, a tightly arranged and chloroplast containing cells are found surrounding the vesicular bundle.These cells are called bundle sheath cells. This anatomical feature of C4 plant is called Kranz anatomy. 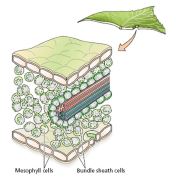 3. Even though a very few cells in a C4 plant carry out the biosynthetic – Calvin pathway, yet they are highly productiv Can you discuss why?

Answer: Calvin cycle occurs in all photosynthetic plants and the main enzyme involved is RuBP carboxylase-oxygenase (RuBisCO). It is during Calvin cycle that the sugar is synthesized by fixing CO2. The rate at which CO2 is fixed determines the productivity of the plant. In case of C3 plants, all the mesophyll cells contain the enzyme RuBisCO, while in C4 plants only Bundle sheath cells contain RuBisCO, thus it can be said that in C4 plant only few cells carry out Calvin cycle and fix CO2 as compared to C3 plants. Still, the productivity is higher in C4 plants. The reason is the difference in the anatomy of these two plants. RuBisCO binds to both CO2 and O2 but it has higher affinity for CO2. Under normal condition, it binds to CO2 and carries out calvin cycle for carbon fixation. But at high oxygen concentration, RuBisCo catalyses the binding of oxygen to RuBP forming phosphoglycolate and initiates photorespiratory pathway. This pathway results in release of CO2 consuming ATP.There is no net synthesis of ATP or sugar molecule in photorespiratory pathway. Photorespiration occurs only in C3 plants.

In C4 plant, the Kranz anatomy indirectly helps in suspension of photorespiratory pathways by two ways:

(2) The C4 acid formed in mesophyll cells is transported to bundle sheath cells, where they are decarboxylated to C3 acid and CO2 molecule. The C3 acid is again transported back to mesophyll cells and help in formation of more C4 acid. The CO2 released in bundle sheath cells increases it’s concentration and thus minimizing the chances to oxygenase activity of RuBisCO enzyme.

Thus productivity of C4 plant is higher as compared to C3 plants as they bypass photorespiration pathway and fix more carbon under similar condition. 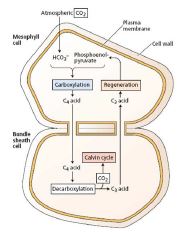 4. RuBisCO is an enzyme that acts both as a carboxylase and oxygena Why do you think RuBisCO carries out more carboxylation in C4 plants?

Answer: RuBisCo is an enzyme that acts both as a carboxylase and oxygenase. However it carries out more carboxylation in C4 plants due to following two reasons:

5. Suppose there were plants that had a high concentration of Chlorophyll b, but lacked chlorophyll a, would it carry out photosynthesis? Then why do plants have chlorophyll b and other accessory pigments?

 They form the antenna molecule, absorb light energy and transfer it to reaction center chlorophyll a molecule, thus increasing the efficacy of the photosystem.

 They surrounds the reaction center chlorophyll a molecule and thus protect it from photo-oxidative damage.

6. Why is the colour of a leaf kept in the dark frequently yellow, or pale green? Which pigment do you think is more stable?

7. Look at leaves of the same plant on the shady side and compare it with the leaves on the sunny side. Or, compare the potted plants kept in the sunlight with those in the sh Which of them has leaves that are darker green ? Why?

When a plant is shifted from shade to light, it senses increase in light intensity, which stimulate the plant to increase the rate of photosynthesis by increasing the chlorophyll content in leaves.

Thus the leaves of the same plant on the shady side as compared to the sunny side or the potted plant kept in sunlight possess higher chlorophyll, thereby appears darker green.

8. Figure shows the effect of light on the rate of photosynthesi Based on the graph, answer the following questions:

(b) What could be the limiting factor/s in region A?

(c) What do C and D represent on the curve?

(a) Keeping all the other factors apart and considering light as only factor affecting the rate of photosynthesis, the region “A” in the above curve is the region where light is the limiting factor because the photosynthesis rate is lowest in this region.

(b) Apart from light, other environmental factors such as CO2 concentration, water supply and temperature may also be the limiting factor. Also the internal factor, such as chlorophyll content in leaves may be one of the limiting factors affecting the rate of photosynthesis at the point “A”.

9. Give comparison between the following:

(b) Cyclic and non-cyclic photophosphorylation

(b) Cyclic and non-cyclic photophosphorylation