Question1. An index number which accounts for the relative importance of the items is known as

Question2. In most of the weighted index numbers the weights pertains to

I. Base year
II. Current year
III. both base and current year

In most of the weighted index numbers the weights pertains to current year because we want to know how the price/quantity has changed in current year from the level of base year.

Question3. The impact of change in the price of the commodity with little weight in the index will be

From 2014, the Reserve Bank of India (RBI) has adopted the new Consumer Price Index (CPI) as the key measure of inflation.

Question5. The item having the highest weight in consumer price index for industrial workers is

Food is the most essential commodity for living. Industrial workers have to spend more on food because they are engaged in physical labour.

Question6. In general, inflation is calculated by using

In general, inflation is calculated by using the wholesale price index. The formula used is:

Question7. Why do we need an index number?

Answer: Index numbers are the statistical tools which measure the changes in the magnitude of a variable with respect to chosen base year. They measure average change in a group of related variables over two different situations. The changes measured are from time to time or from place to place. They are usually expressed in percentages. Index number is one of the most widely used statistical tools. Index numbers are now-a-days called economic barometers. The importance of index numbers can be judged from the following points:

2. Helpful to policy makers: Index numbers serve as a useful guide to the business community in planning their decisions. The employers depend upon the cost of living index for deciding the increase in the dearness allowances of their employees. Index numbers play the role of essential guide in policy formulation related to inflation, unemployment, agricultural, industrial production etc.
3. There are certain changes whose measurements are not possible without index number Index numbers make possible the measurement of relative changes of a group of related variables.

Question8. What are the desirable properties of the base period?

Answer: While constructing index numbers, we have to select two years, i.e. the base year and the year of comparison. Base year is the period against which comparisons are to be made. The selection of the base year is very important.

The following points need to be considered while selecting the base year:

ii)It should not be too near or too far from the current year. While selecting the base year, choice has to be made between fixed base and chain base methods. In the fixed base method, we take a particular year as the base year and express changes in items on the basis of this year. Whereas in the chain based method, the base year goes on changing. For every successive year, the preceding year is taken as base year.

Question9. Why is it essential to have different CPI for different categories of consumers?

Answer: CPI, Consumer price index is a measure of average change in retail prices. It indicates the average change in the price paid by the final consumer for specified quantity of goods and services over a period of time. Different classes are getting affected differently by a change in the price level because different people consume different types of goods, consumer’s habit differs from individual to individual, place to place, strata to strata, etc. So, it is essential to have different CPI for different categories of consumers because the nature of consumption basket of consumers from different economic status varies hugely.

Question10. What does a consumer price index for industrial workers measure?

Question11. What is the difference between price index and quantity index?

Question12. Is the change in any price reflected in a price index number?

Question13. Can the CPI for urban non-manual employees represent the changes in the cost of living of the President of India?

Answer: An index number calculated for the employees who are deriving 50 % or more of his or her income from gainful employment on non-manual work in the urban non-agricultural sector, is termed as consumer price index for non-manual employees. Since the president of India is residing in urban area and is doing non-manual work in non-agricultural sector, so CPI for urban non- manual employees represents the changes in the cost of living of the President of India.

Question14. The monthly per capita expenditure incurred by workers for an industrial centre during 1980 and 2005 on the following items are 75, 10, 5, 6 and 4 respectively. Prepare a weighted index number for cost of living for 2005 with 1980 as the base.

Question15. Read the following table carefully and give your comments.

Answer: The following comments can be made from the given table:

Question16. Try to list the important items of consumption in your family.

Answer: The following are the important items of consumption in our family:

Question17. If the salary of a person in the base year is Rs 4000 per annum and the current year salary is Rs 6000, by how much should his salary be raised to maintain the same standard of living if the CPI is 400?

If the current year CPI is 400 thus, to maintain the base year standard of living the salary should be raised to

Question18. The consumer price index for June, 2005 was 125. The food index was 120 and that of other items 135. What is the percentage of the total weight given to food?

Assume weight assign to food is W1 and to other items is W2. 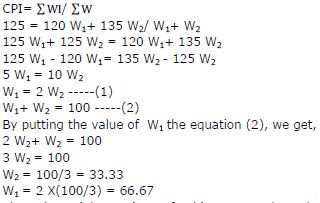 Question19. An enquiry into the budgets of the middle class families in a certain city gave the following information:

Question20. Record the daily expenditure, quantities bought and prices paid per unit of the daily purchases of your family for two weeks. How has the price change affected your family? 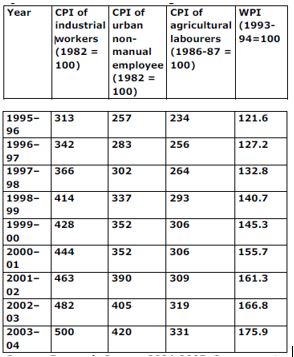 (i) Comment on the relative values of the index numbers.

(ii) Are they comparable? Answer:

(i) A consumer price index number for industrial workers measures the impact of price rise on the cost of living of common people i.e. general inflation.

An index number calculated for the employees who are deriving 50 % or more of his or her income from gainful employment on non-manual work in the urban non- agricultural sector is termed as consumer price index for non-manual employees.

Index Number of Agricultural Production (IAP) records the changes in agricultural production. It is used to study the rise and fall of the yield of crops from one period to other period.

(ii) The given data of each category i.e. CPI of industrial workers, CPI of urban non-manual employee, CPI of agricultural labourers and WPI are comparable with themselves over given time period.

CPI of industrial workers and CPI of urban non-manual employee can be compared with each other because they have the same base year but rests of the categories are not comparable.