(i) Which one of the following gases constitutes the major portion of the atmosphere?

(iv) Oxygen gas is in negligible quantity at the height of atmosphere:

(v) Which one of the following gases is transparent to incoming solar radiation and opaque to outgoing terrestrial radiation?

2. Answer the following questions in about 30 words

(i) What do you understand by atmosphere?

Answer: Atmosphere is a mixture of different gases and it envelopes the earth all round. It contains life-giving gases like oxygen for humans and animals and carbon dioxide for plants.

(ii) What are the elements of weather and climate?

Answer: The main elements of weather and climate are temperature, pressure, winds, humidity, clouds and precipitation.

(iii) Describe the composition of atmosphere.

Answer: The atmosphere is composed of gases, water vapour and dust particles.

(iv) Why is troposphere the most important of all the layers of the atmosphere?

Answer: The troposphere is the lowermost layer of the atmosphere. This layer contains dust particles and water vapour. All types of changes in climate and weather take place in this layer. This is the most important layer for all biological activity.

(i) Describe the composition of the atmosphere.

Answer: The atmosphere is composed of a number of gases, water vapour and dust particles. Nitrogen and Oxygen are two main gases, which form over 99% of the total volume of the atmosphere. The other gases are argon, carbon dioxide, neon, helium ozone hydrogen, methane, etc. The following chart gives percentage of permanent gases in the atmosphere: 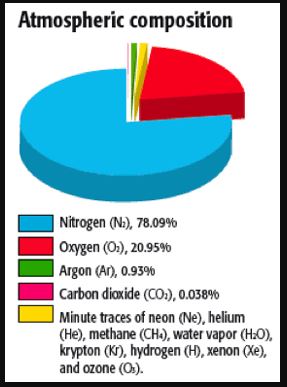 (ii) Draw a suitable diagram for the structure of the atmosphere and label it and describe it.

Answer: Structure of the Atmosphere: The atmosphere consists of different layers with varying density and temperature. 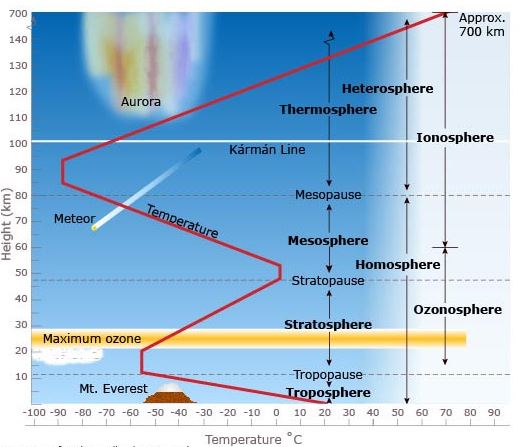 Troposphere: This is the lowermost layer of the atmosphere. Its average height is 16 km, although it is only 10 km at the poles and extends up 18 km at the equator. Temperature decreases with height in this layer, roughly at-the rate of 1°C for 165 metres of ascent. This is known as normal lapse rate.

Mesosphere: It lies above the stratosphere, and extends upto a height of 80 km. The upper limit of mesosphere is known as the mesopause.

Ionosphere: The Ionosphere is located between 80 and 400 km above the mesopause. Temperature here starts increasing with height. It contains electrically charged particles known as ions, and hence, it is known as ionosphere. Radio waves transmitted from the earth are reflected back to the earth by ionosphere.

Exosphere: The exosphere is the outermost layer of the Earth's atmosphere. It starts at an altitude of about 500 km and goes out to about 10,000 km. Temperatures in the Earth’s exosphere remain constant with altitude, averaging about 1500 Km.